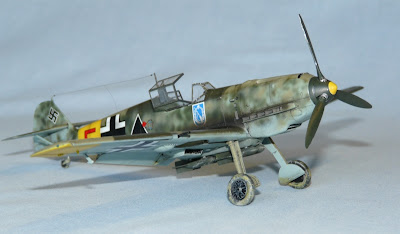 Rowan Gough recently posted his latest stunning Bf 109 model on Britmodeller. Built from the Tamiya kit and beautifully airbrushed and mottled, Rowan selected a subject from the 48th Bf109s Sky decal sheet,  basing his model on a photo that was first published in 'Stukas-Jagdbomber-Schlachtflieger' by Aders/Held. In their caption Aders states that the aircraft is a Bf109 E-7 from 11. (Schlacht)/LG 2 in 1941. Rowan had a few queries with regard to the book caption, the machine and its colours and as usual the members of britmodeller were quick to supply some answers .. 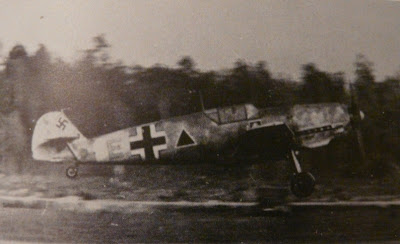 Dave Wadman posited that the photo was likely taken on the Eastern Front sometime between June 1941 and mid to late 1942 and the aircraft was probably on the strength of Schlachtgeschwader 1 (Sch.G.1) and was thus not a machine from LG 2. In particular the fuselage markings identify it as belonging to Sch.G.1, which consistently used the black Schlacht triangle and coloured letter on its Bf 109Es. The red letter 'E' on the yellow fuselage band indicates a machine of 2. Staffel. 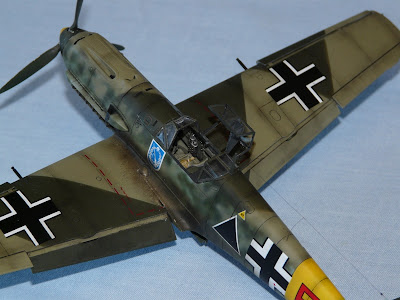 As far as the colours and markings are concerned, 02/71 became the standard factory finish for 109Es with the introduction of the E-4 in May 1940 and the aircraft was thus most likely to have been finished in these colours with the fuselage mottle in varying densities of any combination of 70, 71 or 02. The lower wingtip surfaces were most likely yellow but not the upper surfaces. The spinner cap was either white or yellow.  The variant was most probably an E-7 as 2. Staffel had considerably more E-7s on strength between December 1941 and late 1943 than it did E-4/Bs. However in theory the Bf 109 in the Aders/Held photo could be anything from an E-1 to an E-7 - the later canopy and spinner cap is no indication of sub-type as they could easily be retro-fitted to earlier models. It is not possible to determine from the image if the aircraft is fitted with wing cannon (which would definitely rule out its being an E-1). However, as the Geschwader strength returns for the period list only a few -3s with the balance made up of -4s and -7s, the odds are against it being an E-1. Note the shield beneath the cockpit, which probably features the infantry assault badge,  frequently worn by the Hs 123s, Bf 109Es and Hs 129s of the Schlachtgeschwader on the Eastern Front. The aircraft has the large belly bomb rack for four SC50 bombs. 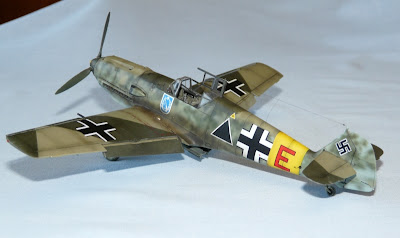 
Two images of a crash-landed LG 2 Schlacht 109 came up on eBay recently below (thanks Chris!) - note the rather rare 'bear-wielding-axe' emblem of 5.(Schlacht)/LG 2 on the cowling plus the Schlacht triangle. The 'bear' is actually depicted on the emblem chopping up an umbrella (presumably Chamberlain's?), a throw-back to LG 2's Jabo Battle of Britain campaign... 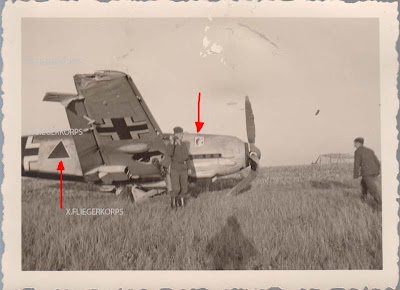 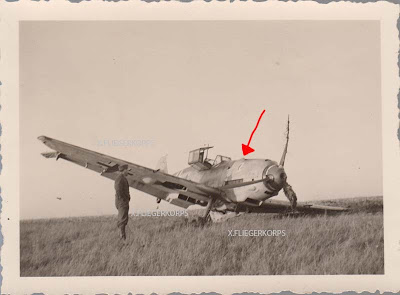 More Eastern Front Jabos on this blog here
Posted by FalkeEins at 12:18