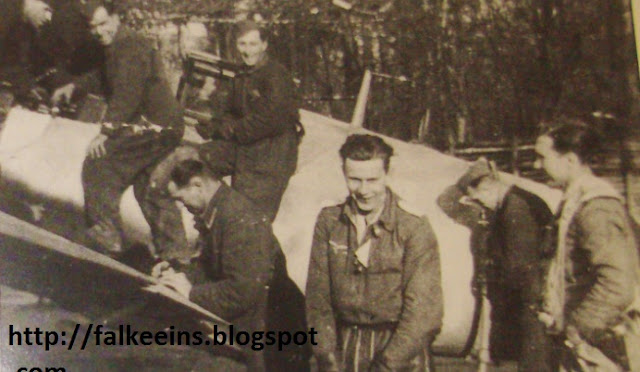 Very rare image from the collection of Robert Eggert (via Ledet) of a youthful (nineteen years old) Lt. Lothar Kabbe seen on his return from a successful combat sortie during 1944. Note the armourers seen counting the remaining rounds. Eggert himself is on the far left of the image supervising.

According to Eggert, erster Wart with II./JG 2, this picture was taken possibly prior to or even during the period of the Normandy invasion. In the latter case this is likely to have been at Creil near Paris. Kabbe was Staffelführer with 8./JG 2 during this period and went on to claim a P-47 on 4 July at low altitude over Le Neubourg on a day that saw heavy fighting in the area Evreux-Beaumont-le-Roger-Bernay and some seven II./JG 2 pilots shot down and killed. Kabbe himself had enjoyed some success during the first few months of 1944 when II./JG 2 found itself in the front-line against the huge USAAF bombing raids over Germany, claiming a B-17 on 8 February, a P-47 on 22 February, another B-17 on 25 February and a B-24 during the Berin raid on 6 March 1944.

II./JG 2 was withdrawn from operations for rest and refit during May 1944 after some fifty pilot losses during this period but was sent to France on 13 June flying into a satellite field some twenty kilometres east of Creil. Pilots were billeted in the surrounding villages and ordered to avoid contact with the locals for fear of attacks by members of the Resistance. First sorties over Normandy were flown on 17 June 1944. In the space of the next two months a further twenty five II./JG 2 pilots lost their lives before the Gruppe was withdrawn from France. Kabbe achieved further victories including a P-38 over Aachen on 12 October 1944 and survived the war - he was shot down by anti-aircraft fire at the controls of Bf 109 G-14 'Blue 13' during the Bodenplatte operation on New Years Day 1945. ( Manhro's seminal work on the 'Bodenplatte' operation states that Kabbe managed to return to Nidda several days later. Other sources indicate that he was taken captive). Postwar he settled in Cologne and built up his own construction company.
Posted by FalkeEins at 09:01