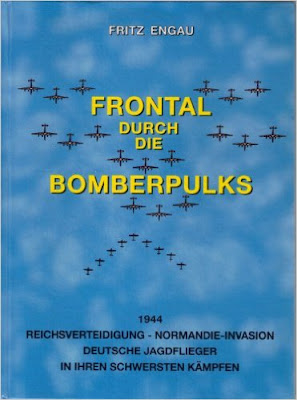 Fritz Engau was a Bf 110 Nachtjagd pilot who flew with Schnaufer in NJG 1 before joining JG 11 in the defence of the Reich. His memoir  - 'Frontal durch die Bomberpulks' - is a rather poorly organised and photographically weak account but then memoirs from Focke Wulf 190 pilots and in this instance a JG 11 Staffelführer in the defence of the Reich are rather thin on the ground.

In 'Frontal durch die Bomberpulks' - sub-titled '1944 Reichsverteidigung - Normandie-Invasion: Deutsche Jadgflieger in ihren schwersten Kämpfen' or German fighter pilots in their hardest combats - Engau describes his experiences in 1944 over the Reich and the Normandy invasion front.  Engau recalled one of his most notable sorties. On May 24, 1944 616 Fortresses of 1 and 3 BD escorted by over 900 fighters headed for Berlin crossing the coast from the north over Schleswig-Holstein. Some 14 Tagjagd Gruppen were directed against this raid including Engau’s I./JG 11;
“..it was one of the sorties I flew as a day fighter that I would never forget. We could only fly the occasional mission in the kind of poor visibility we met that day. We were about ten Fw 190s and we flew in an arrow-head formation. We managed to turn into a box of two or three Pulks – each of 18 bombers - but were not quite correctly lined up on them. With Oblt. (Hans-Heinrich) Koenig leading we headed towards the formation all guns blazing. Suddenly there was a flash. Koenig had failed to pull up in time and had smashed full tilt into a B-17. The bright explosion was probably his explosive rounds going off. I saw huge pieces of debris spinning away. As we passed through the Pulk and swept into a turn to fly a second pass there was no sign of the B-17 that had been hit. But I could still see the wreck of Koenig’s machine tumbling down, wings torn off. It was not burning ..but there was no parachute..” 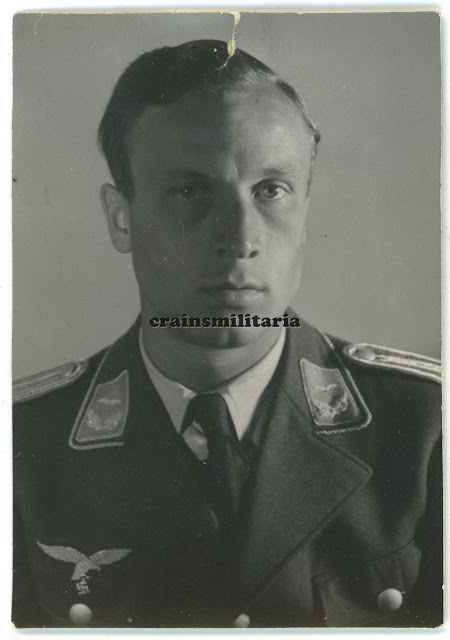 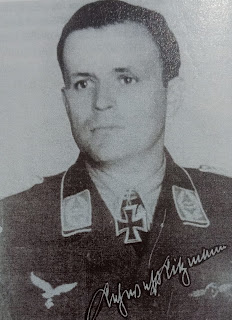 "..In front of me, one aircraft after the other was now plunging steeply downwards. I also guided the Ju-88 into the dive ... Suddenly a flash of fire, a blow to the head. No more aircraft around me. I found myself free-falling, still strapped in the armoured seat ..plunging earthwards...."

Grandson of WWI infantry general Karl Litzmann, Walter Lehweß-Litzmann joined the Reichswehr in 1925 and the Luftwaffe in 1933. According to his son's account, Lehweß-Litzmann 'was involved in building up the air force' as Aufklärer, Kampfflieger and Generalstabsoffizier.
In April 1941 as Maj. he was appointed Kommandeur of  III./KG 1 and on July 7 crash-landed his Ju 88 A-5 (V4+AD) near the coast during an attack on Pernau airfield, Estonia 'following engine failure'. He escaped back to friendly lines. Following the awards of the Ehrenpokal and the DKiG, he was named Kommodore KG 3 'Blitz' in April 1943. On 18 July 43 he was shot down in flames near Kharkov, making a belly-landing in safe territory.
On September 7, 1943 he was the victim of an unlikely 'partisan action' - his Ju 88 blew up mid-sortie near Bulovka. According to one account a bomb had been planted on board, a story that originates in a 1987 'DDR Flieger Revue' article written by Lehweß-Litzmann's son entitled "Ein ungewöhnliches Fliegerleben". In the explosion he was 'catapulted' out of  his Ju 88 A-5 (5K+AA) still strapped into his seat but managed to release himself and landed safely by parachute. Again according to his son's account, he became the highest-ranking airman (Kommodore) taken prisoner of war in the Soviet Union. Presumed KIA on the German side he was 'posthumously' awarded the RK (October 29, 1943).
Witnesses to the loss of the Ju 88 flown by the Kommodore concluded (self-evidently) that the machine had taken a direct hit from anti-aircraft fire. Three parachutes were seen, one of which was on fire and failed to open correctly.  This was most probably the  BO/observer SFw. Stefan Rajek who was found by the Russians severely injured but who reportedly died in a (German) air attack en route to a field hospital. Bordfunker Uffz. Ulrich Oelner crashed with the machine. BM/S (flight engineer/gunner) Gfr. Gunther Herzog was also taken prisoner.
In captivity Lehweß-Litzmann's " first impressions of the Russians were completely at odds with all the anti-communist propaganda that he had been fed up to that point.."  He was already apparently a Russian speaker and eventually actively joined  the anti-Hitler 'Nationalkomitee Freies Deutschland' (NKFD) movement, the "new, supposedly democratic path for Germany".

He was of course stripped of his decorations. After a new start post-war as a journalist in the midst of a divided Berlin, he participated in the build-up of the air force of the East German state and 'made his contribution to the remarkable performance' of civil aviation in the DDR (East 'German Democratic Republic'), being responsible for crew and pilot training at Interflug, not as Bergstrom says, as 'head of Interflug'..Lehweß-Litzmann may eventually have been side-lined as an embarassment to the East German state who prided themselves on establishing an air force and an airline without recourse to former decorated members of the Wehrmacht. In Jörn Lehweß-Litzmann's account it was a bad car crash in 1969 that put a 'premature' end his fathers career...
with thanks as usual to the De Zeng/Stankey Luftwaffe Officer career summaries here  and to Alexander Steenbeck for a copy of Jörn Lehweß-Litzmann's 1987 article on his father's 'unusual aviator's career..'
Posted by FalkeEins at 05:32 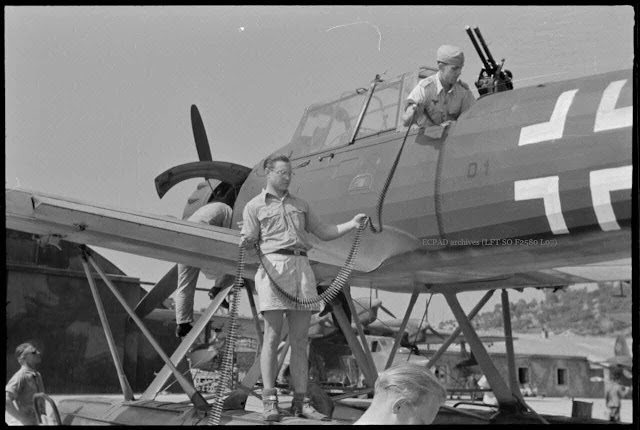 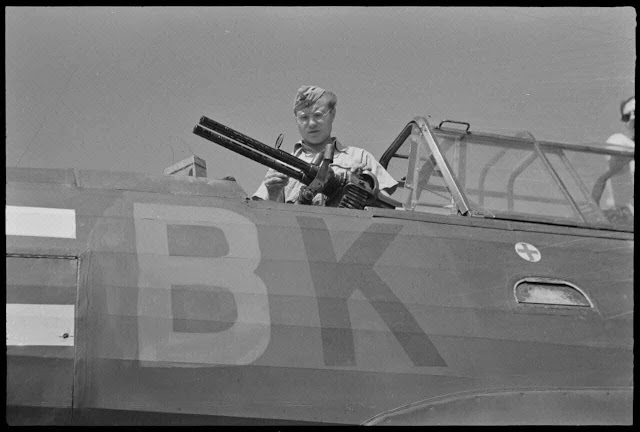 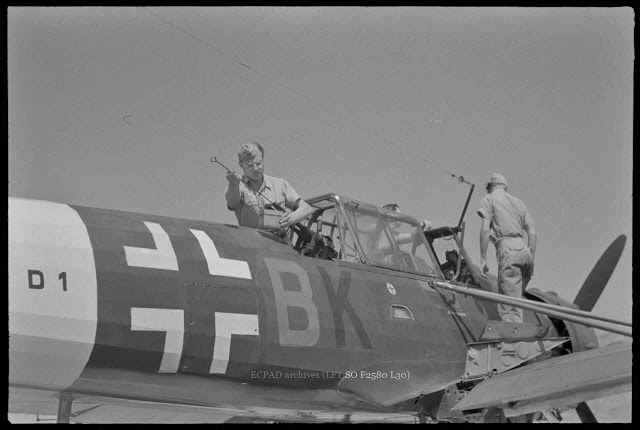 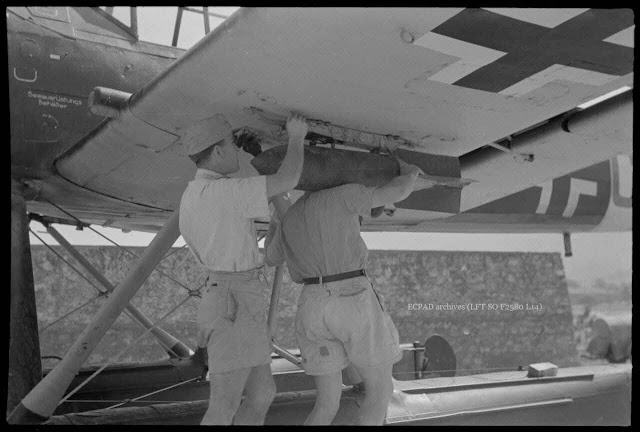 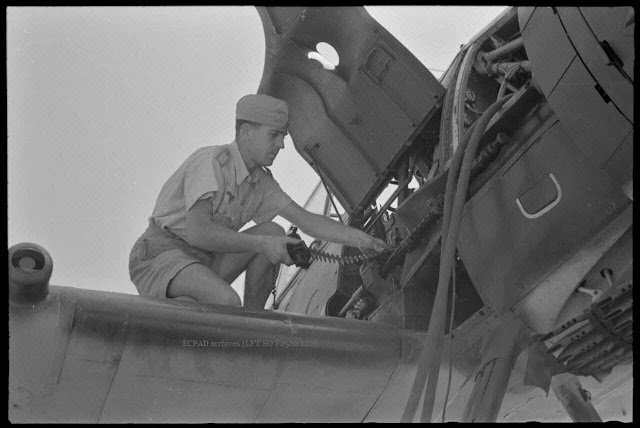 also on this blog;

JG 53 Pik As included among its pilot roster a good share of  noteworthy 'personalities' many of whom were promoted and decorated during the summer of 1940.  However there would be no awards for the Kommodore of the Geschwader. The 38-year old von Cramon-Taubadel flew in the Battle of Britain, claiming only his second victory on 27 September 1940, a Hurricane near Dungeness. It was during this period that Göring started to replace the older Kommodores with younger up-and-coming aces. JG 53 was no exception, the Kommandeur of II./JG 53 Maj. von Maltzahn taking over from von Cramon-Taubadel on 30 September 1940. At some point during this period  it is reported that Göring  ordered the covering-up of the unit's well-known Pik As 'Ace of Spades' emblem. It was to be replaced with a red cowl band.  The precise reasons for this remain unknown. 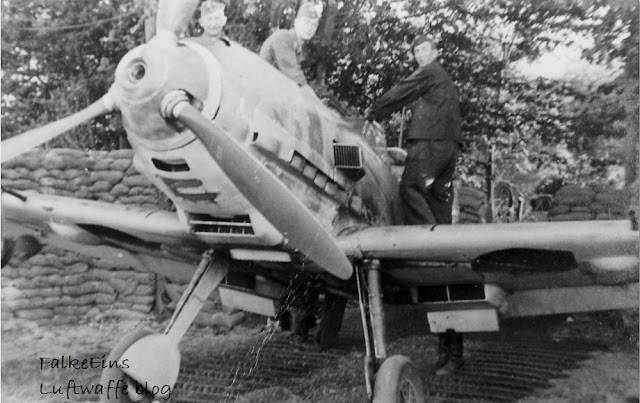 Back in 1980 (in one of his first published pieces) Jochen Prien listed some of the JG 53 machines that wore 'rote Ringe' and examined several theories as to the significance of the marking - for example, they were perhaps a marking to facilitate reformation in the air  ('Orientierungshilfe') or denoted aircraft fitted with Jabo bomb racks. Having been compiled forty years ago his listing of Emils featuring a red cowl band is incomplete but worth reproducing here  ("Rote Ringe"  - Luftfahrt International, 1980/11).

Jochen Prien concluded that the most likely theory is that the 'red rings' identified machines flown by the Staffel leader and Schwarmführer -  the Emils flown by Ohly, Rupp, Mayer and Walter Fiel  fulfilled this category. Bf 109 E-4 "white 1" of 4./JG 53  - the mount of the Staffelkapitän Oblt.Günther Schulze-Blanck - also featured the ‘red ring’. Note that the machine flown by the Kommodore displayed the red stripe - see von Cramon-Taubadel's Emil below  - the Kommodore was of course the leader of the Geschwaderstabschwarm.
Below;
Emil flown by the Kommodore Maj.von Cramon seen after his landing accident at Rennes on August 18, 1940. The engine cowl - right foreground - features the red stripe that replaced the Pik As emblem. The machine has a collapsed starboard gear leg and is being lifted by an ex-RAF Coles crane. Note the bars of the Stab marking are set below the centreline of the Balkenkreuz. 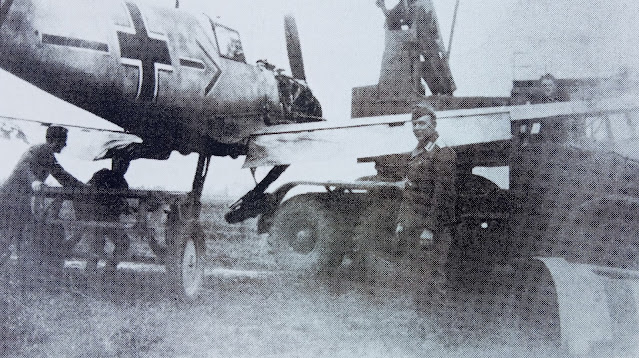 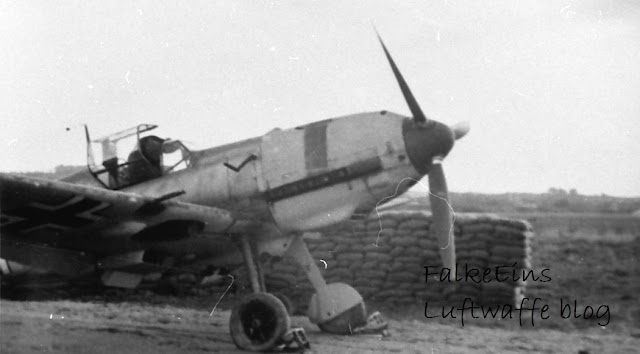 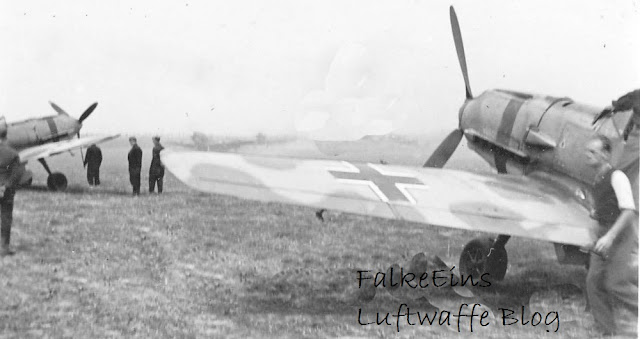 A number of Emils lost over England displayed the red band -  commencing on 16 August 1940 when Fw. Christian Hansen of 2./JG 53 crash-landed his E-4 at Godshill on the Isle of Wight. This was followed by the loss of the 6. Staffel machine flown by Hptm. Alois Maculan (August 25 near Weymouth). The last 'red ring' was noted on November 2 (Fw. Xavier Ray's 8./JG 53 machine). 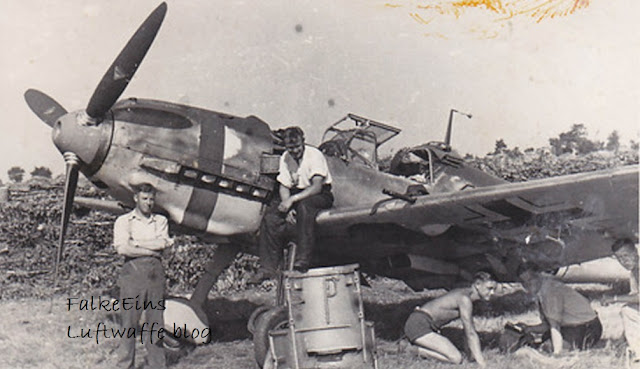 also on this blog;
Luftwaffe war graves in England  -Hans-Karl Mayer
Erich Schmidt Ritterkreuz July 1941
III./JG 53 Emils seen after the restoration of the ‘Ace of Spades’ badge in November 1940. Note the over-painted Hakenkreuz on the tail-fin in the image below left ..... 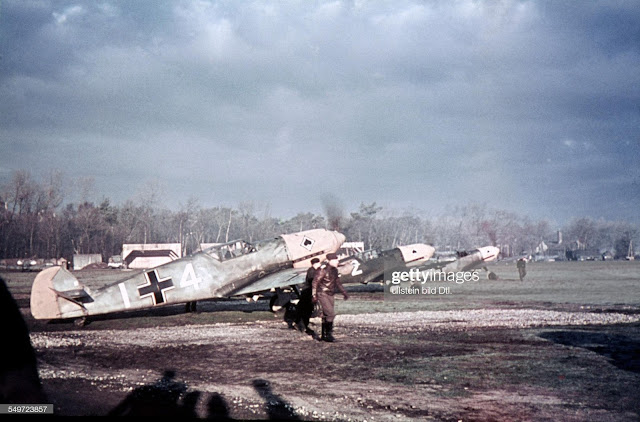 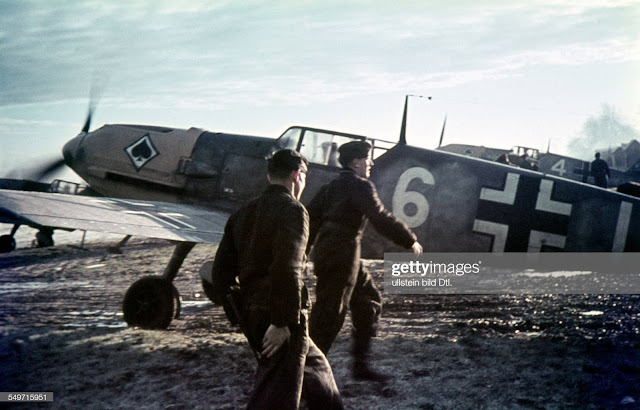