Weser Flugzeugbau GmbH, known as Weserflug, was one of the largest aircraft manufacturers in Germany during WWII. The company was founded in 1934 as a subsidiary of the shipping and manufacturing company Deutsche Schiff- und Maschinenbau AG (DeSchiMaG). It began production that year at Berlin Tempelhof and completed the purchase of Rohrbach Metallflugzeugbau GmbH, Berlin. In 1935 Dr. Adolf Rohrbach became technical director of a new Weserflug factory at Lemwerder, near Bremen, which opened in 1936. He had been working on ideas for STOL and VTOL (Vertical TakeOff and Landing) aircraft since 1933, and now developed them further. The planned P1003/1 was projected to fly with 4 metre diameter propellors that swivelled between horizontal and vertical and could fly up to 650 km/h. The Boeing V-22 Osprey aircraft uses essentially the same concept. It requires very complex gearing to tilt the wings without varying the power to the propellers. During World War II Weserflug had another factory in Poland, at Liegnitz where Ju 188 and Ju 388 types were constructed. During the period  Weserflug constructed well over 5,000 Junkers Ju 87 Stukas at Tempelhof. This plant also constructed Fw 190 fighters. Forced labour and KZ or concentration camp labour was used extensively;  on 20 April 1944 some 2,103 of the 4,151 Tempelhof workers were foreign forced labourers. 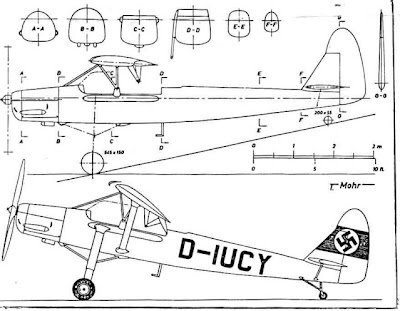 The Weserflug Bf 163 project was started by Messerschmitt (hence the Bf designation), but due to other priorities was given over to Weserflug for development as a rival to the Fieseler Storch short-take-off and-landing spotter and liaision aircraft. The finished prototype offered a very similar performance to the Storch, was powered by the same Argus engine, but was a significantly more complex design due to its variable-incidence wing. The Bf 163 project was subsequently abandoned in favour of the Storch but interestingly, the 163 RLM designator was one of only a few to be subsequently re-allocated to another Lutwaffe aircraft design (the Me163 Komet). 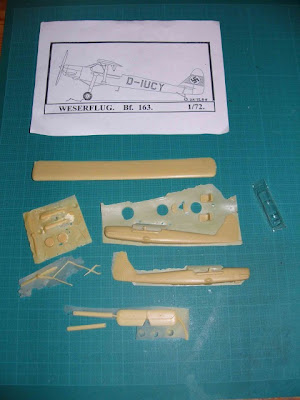 The Dujin resin kit of the Bf 163 (above) dates from the late 1990's and can fairly be described as 'high quality, old school'. The parts are crisply moulded, with fine engraved surface detail and only a few small air bubbles. Where the kit does show its age is in the treatment of the cockpit which is represented by a crudely shaped, under-sized opening. The resulting fuselage walls are way too thick which, due to their prominence require thinning. Only two seats and instrument panels are provided as interior detail and no instructions are given as to how they should be configured. The final concern is the vac-formed canopy which is dire due to heavy creasing. Four canopies are provided, but as they are all as bad as each other this doesn't help much! All in all though an interesting build, particularly the mounting of that wing onto its precarious struts 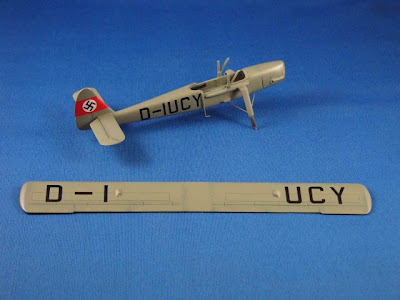 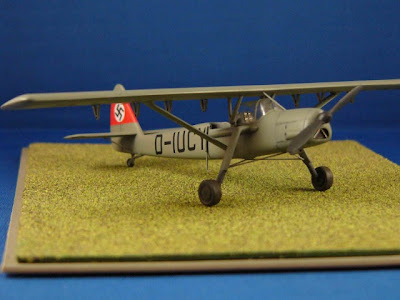