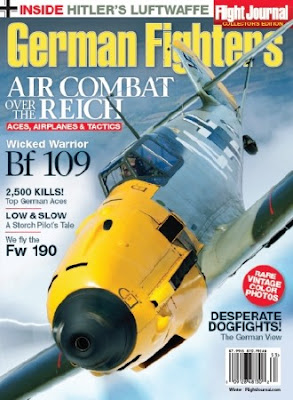 Flight Journal’s latest special issue, German Fighters, is certainly worth taking a look at if you're interested in Luftwaffe subjects.. or as the publisher puts it;

".. If you are driven to learn all you can about Luftwaffe aircraft, then you don’t want to miss out on this truly exceptional special issue. Not only do in-cockpit evaluations tell how the legendary Fw 190 and Bf 109 actually flew, but German Fighters also showcases the words of pilots who flew those aircraft into combat against Allied forces. You’ll ride along as German pilots dive into battle in Stukas and skate around treetops to avoid marauding Allied fighters while flying the Storch. All of this is supported by some of the best vintage German color photos ever presented, as well as the eye-watering modern color photography for which Flight Journal has become renowned...." 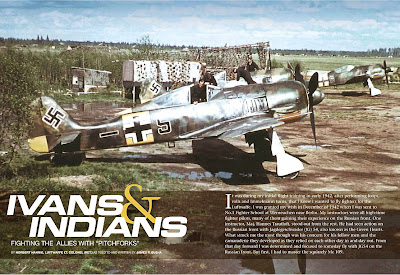 What particularly caught my eye - aside from the usual 'flying the Fw 190'-style article from legendary test pilot Eric Brown - were a number of articles written by Eddie Creek and in particuclar the 'combat diary' style piece on his uncle Rudolf  'Rex' Nielinger, a veteran of Russia and Africa who had flown with II./JG51 (photo below of  Nielinger and his 'white 4' of 6./JG51 seen during 1941 on the Channel coast). Nielinger  achived some twenty victories over the course of some 450 sorties and ended the war with Galland's JV 44 after a spell as a training instructor with JG 103. Nielinger flew some 508 combat flights in total. 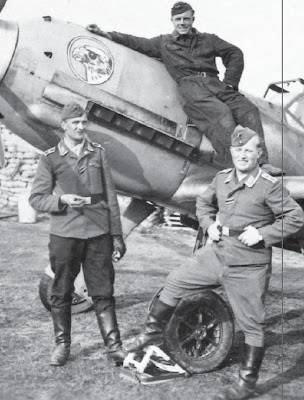