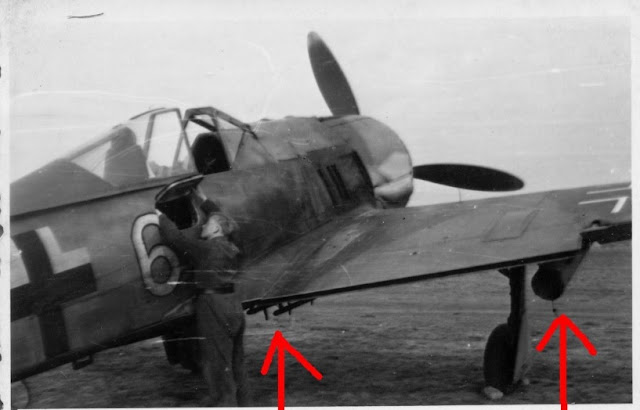 Late variant Focke-Wulf Fw 190 of JG 6 according to the seller, seen in Königsberg on Defence of the Reich duties. Note the underwing 21 cm Raketenwerfer rocket grenade launcher. On offer here 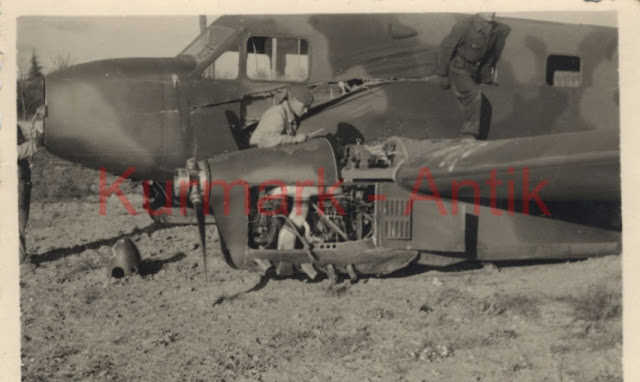 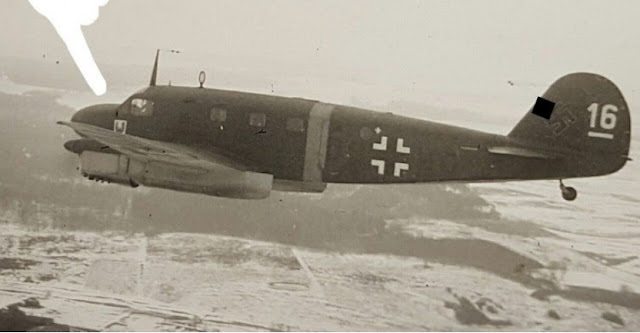 The Caudron C 445 Goéland was an important school and training type in the inventory of the Luftwaffe with over 750 new-build machines seeing service in the Luftwaffe in additional to those Beute machines captured with the fall of France. The type was the most-produced aircraft type in French factories during the German occupation. Even heavy Allied bombing raids on the Caudron-Renault Courbevoie factory and the Renault works at Billancourt in the suburbs of Paris during September 1943 which resulted in large loss of life could not stop the flow of Goélands to the Luftwaffe. Between 1936 and 1948 over 1400 examples were constructed and large numbers saw service with Air France and Lufthansa. 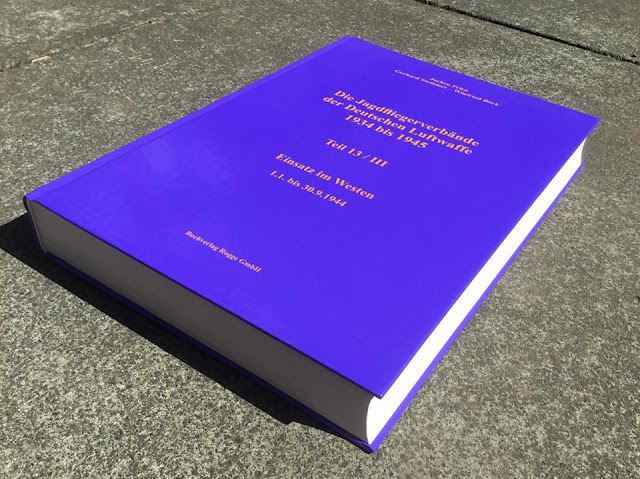 Latest volume in the huge ‘Luftwaffe fighter unit‘ series from Jochen Prien....Volume 13 part 3, nearly 700 A-4 pages covering Jan-Sept 1944, entitled "Operations in the West". This massive tome covers all fighter units operating in the West up to 06 June 1944 ( pages 1 to 204) with the bulk of the book devoted to the period 6 June-30 September, " Abwehreinsatz gegen die Invasion ". Alongside the 4. and 5. JD fighters of JG 2 and 26, the daily chronology covers such lesser known Bf 109 and Fw 190-equipped units as NAG 13, JG 105, JG 107, JGr. Süd, JGr. 200, SAGr. 128, 5. (F)/123 and the Ju 88 Cs of ZG 1. The period covered in this latest tome is of course characterised by ever-growing and ultimately overwhelming Allied superiority, culminating in the D-Day landings - usually referred to as the 'invasion' - and the liberation of France. Taking one date at random - Thursday 2 March 1944 -  there were countless RAF and USAF aircraft in the skies both of northern France (9th AF and 2nd TAF raids against airfields and V-1 installations), towns of western Germany (US 8th AF raid Frankfurt am Main) and southern France (F-5 recce sorties), countered by the Gruppen of JG 26 and JG 2. Losses among the  Luftwaffe fighter units were enormous  - 2 March 1944 saw the death in action of the Kommodore JG 2 Obslt. Egon Mayer - his successor Major Kurt Ubben would be KIA just over one month later. The strain of relentless combat in the face of overwhelming odds can be seen etched on the face of 34-year old Hptm. Wolfgang Neu (photo second from right top below), Staffelkapitän 4./JG 26, seen on his return from a sortie at the controls of his FW 190 A-7. He was Kapitän of 4./JG 26 from early 1944 until his death on 22 April 1944, shot down over the Eifel during combat. He had tallied 12 victories, including seven four-engine bombers. While Fw. Günther Jahn - top left, a member of Bühligen's Geschwaderstab - was KIA on 24 July as Staffelführer 10./JG 2 strafing Allied positions around Caen. 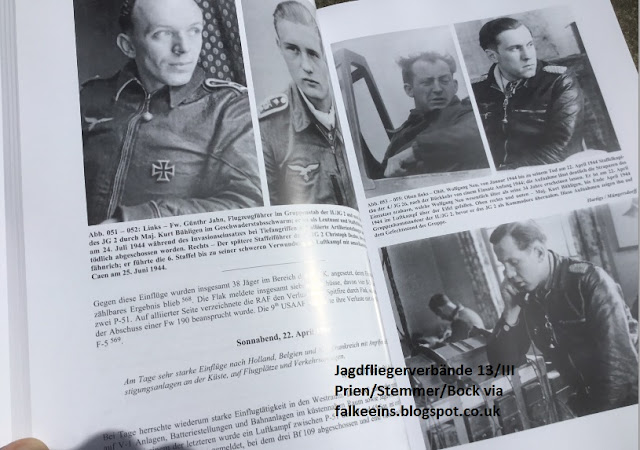 One of the most successful pilots in the West during early 1944 was the Staffelkapitän of 5./JG 26 Ofw. Adolf Glunz - on 22 February he claimed three B-17s and a 78th FG  P-47 as well as two further Herauschüsse. Most successful pilot during the 'Invasion' period was Hptm. Theo Weißenberger (Kommandeur I./JG 5) with 25 Luftsiege. He returned his 199th and 200th victories on 25 July - although as the authors point out on page 441, a good number of his 25 'invasion victories' cannot be confirmed from Allied records. The presence of such 'super' aces ( to coin a phrase) makes it possible (just) to argue that constant front-line action made the most of the limited resources available to the Jagdwaffe -  by 1944 they were easily capable of anticipating every opponent's manoeuvre in the sky such was their level of experience. At the same time the average Allied fighter pilot would perhaps only fly or have flown 50-100 sorties before being rotated away from the front. ".. Just how good could they be ? "  However the skill level of the pool of German pilots presented stark contrasts  -  so many good pilots were KIA in the first six months of 1944 in the West that most Gruppen were left with only a handful of aces and a small number of experienced but not yet 'expert' pilots, while the vast majority had just hours flying experience and were desperately pressed into service without sufficient training.  Elsewhere coverage extends to all the other units that arrived in France to combat the 'Invasion' and is equally as comprehensive - and that includes 4./JG 52, 7./JG 51 and 9./JG 77..

It is difficult to do justice to a work of this nature in just a few lines of blog comment, that much is obvious and I apologise to the authors for my hopelessly inadequate appreciation. Suffice to say, the production values of this latest Prien/Stemmer/Bock volume are top-class, the text and detailed coverage is second-to-none and the photo content is as comprehensive as you would expect..quite stunning. Aside from one or two well-known images, it is obvious that a huge effort has been made to only use 'new' photos and highlights are many; the series of Hans-Ulrich Jung's 7./JG 3 Bf 109 G-6/AS and the Werfer-equipped Fw 190s of III./JG 2 are especially noteworthy. 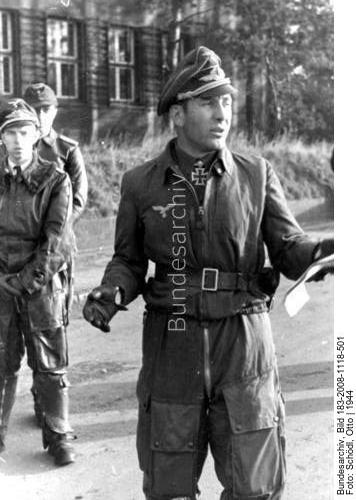 Available at www.caraktere.com now is CJ Ehrengardt's Aérojournal 'special' on the Armée de l'Air May-June 1940. While in the immediate post-war period the defeat in May-June 1940 was largely and almost wholly attributed to the failure of the French Air Force - incapable of winning any sort of air superiority over the Luftwaffe's fighters or of holding up the Panzers with the Bre 691s of the ground-attack arm - the work of certain historians during the 1970s went too far in the other direction - the notion that the activities of the French air force inflicted losses that contributed to the victory of the RAF during the Battle of Britain - despite the fact that nearly 2,000 Armée de l'Air aircraft were abandoned on the ground to the Germans! As C-J Ehrengardt relates the reality lies somewhere between the two extremes..

Despite the cover composition - a JG 51 Emil downing a GC I/3 D.520 - the text does not focus on fighter combat, but is divided into three main subject areas; 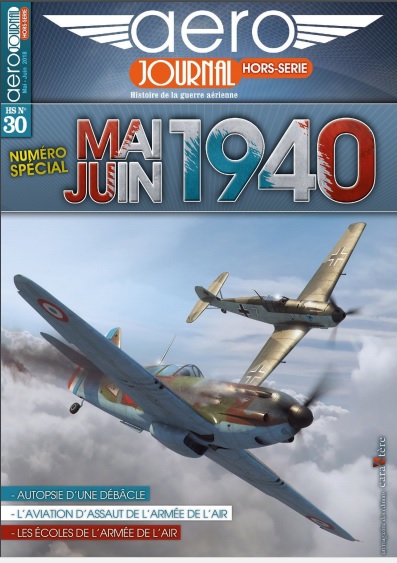 Nicely complementing this treatment and also recently published by caraktere is CJE's 'Encyclopedia of French fighters 1939-42'.. 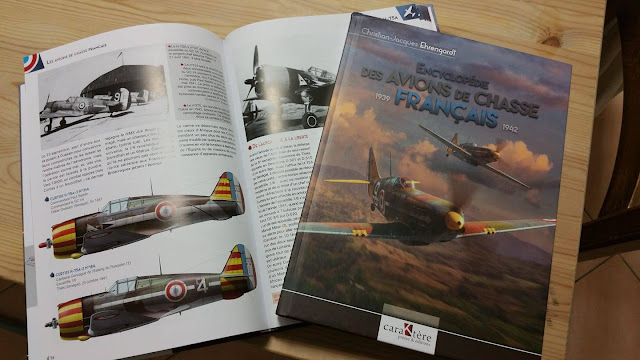 Latest in the Batailles Aériennes quarterly series from Lela Presse is a new title starting a series of issues devoted to the Luftwaffe over Malta. Again, very nicely done and recommended. No idea who author 'Pol Glineur' is - could well be another of Jean-Louis Roba's pseudonyms..Go to the publisher's website here for a sample extract in pdf. 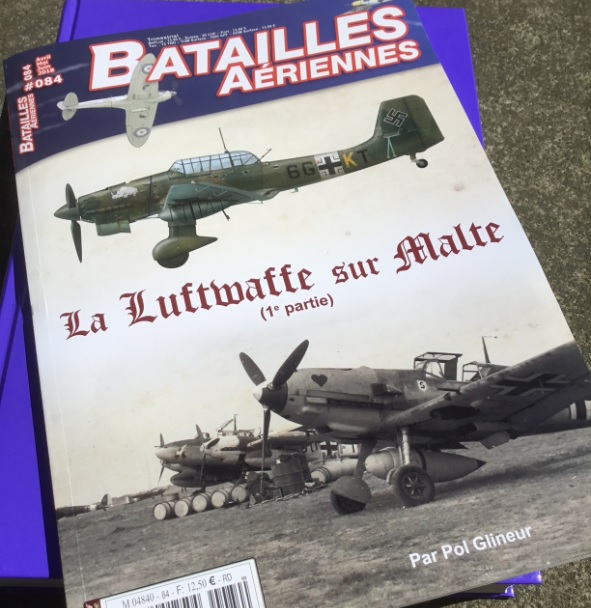 Also due imminently is Roba's new volume on the Fw 200. 320 pages, 660 photos, more info at avions-bateaux.com including a pdf sample extract here 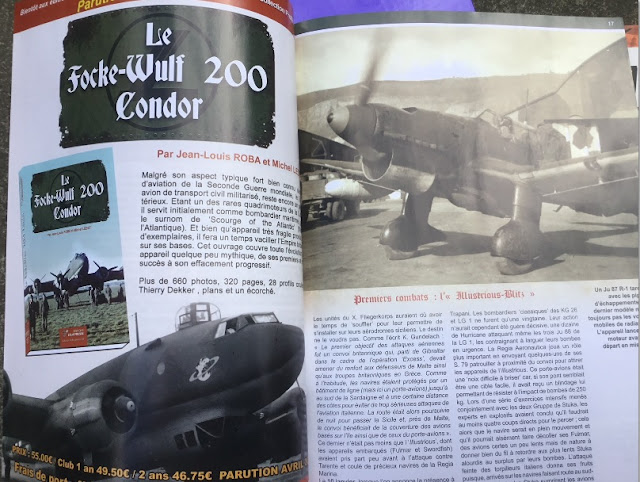 Latest Chris Goss title in the Frontline 'Air War Archive' series is this neat photo monograph devoted to the Dornier Do 17. While the type was the Luftwaffe's principal light bomber at the outbreak of war, helping to spearhead Germany's Blitzkrieg in Poland and then France and the Low Countries, heavy losses at the hands of Fighter Command in the Battle of Britain saw the type largely superseded by the Ju 88 so that by the summer of 1941 and the invasion of the Soviet Union, KG 2 was the only Dornier Do 17-equipped bomber unit. This book is a compilation of decent wartime images nicely reproduced over 136 pages in a slightly larger than A-5 softback format at a very reasonable price complementing the volumes already published in this series on the Bf 109, He 111 and Ju 88. The images are assembled under five headings, most notably ' Early development and pre-war deployment', 'The Attack on Poland' , 'War in the West', 'The Battle of Britain and the Blitz' and 'After the Blitz, 1941 and Beyond'. While there is a four-page text introduction detailing the major variants including the Kauz nightfighter versions (although only two photos of these particular rare birds), the photo captions comprise the bulk of the text, ranging from one or two lines to a good half-page. You probably won't be surprised to read that a lot of the images depict crashed and wrecked machines – but surprisingly perhaps such shots do show a fair amount of close-up detail, even where aircraft identity is not always confirmed. Coverage post-1941, when the type was serving in various secondary roles, amounts to just a handful of pages.. 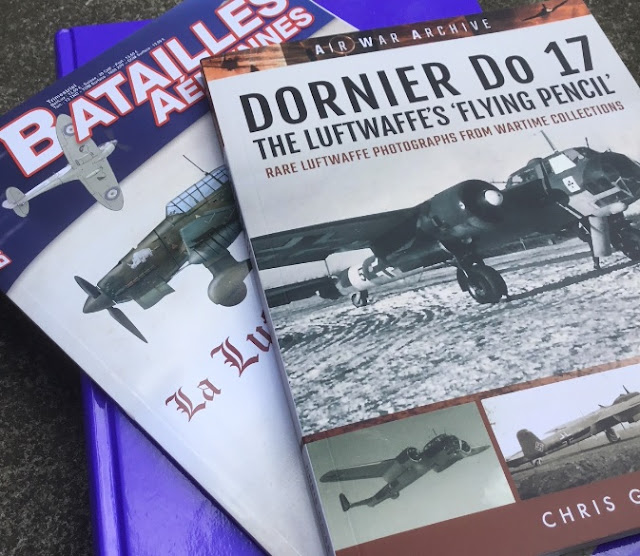 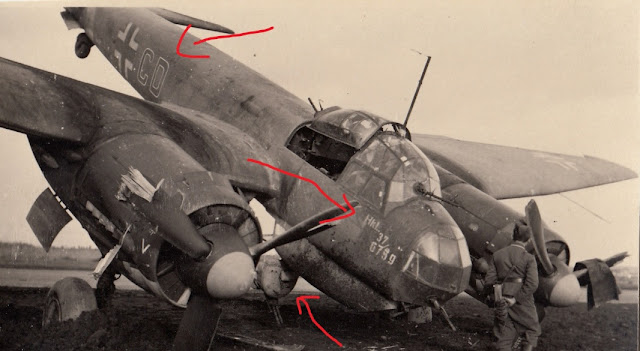 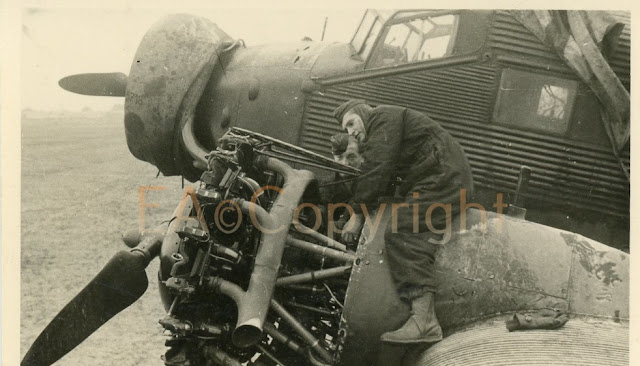 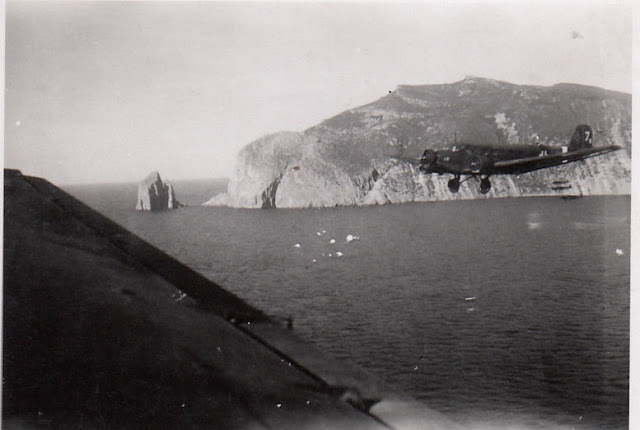 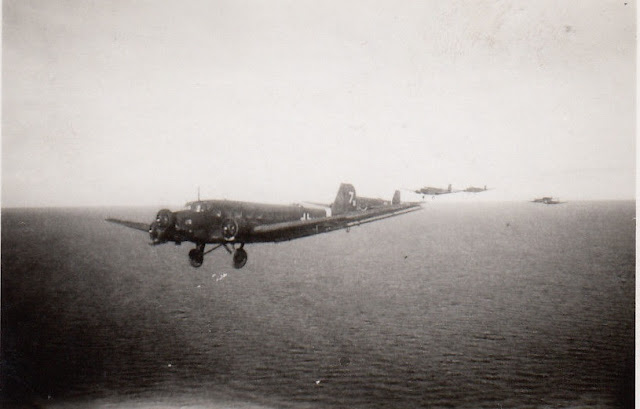 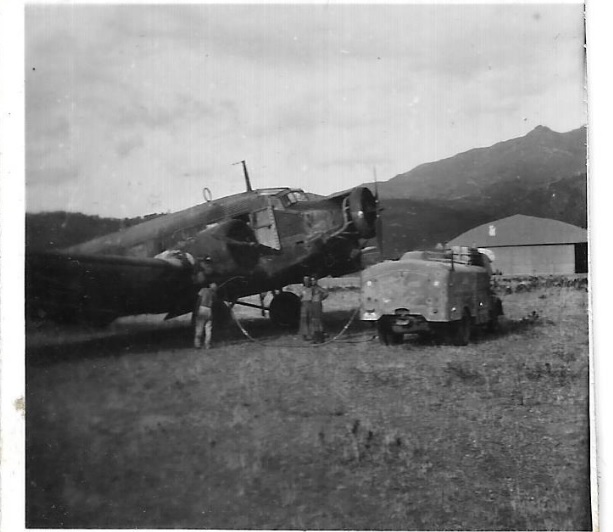 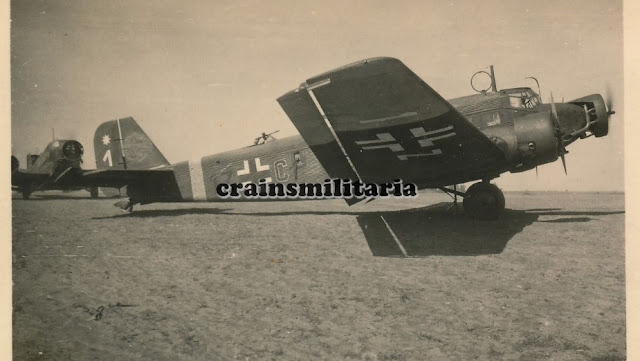 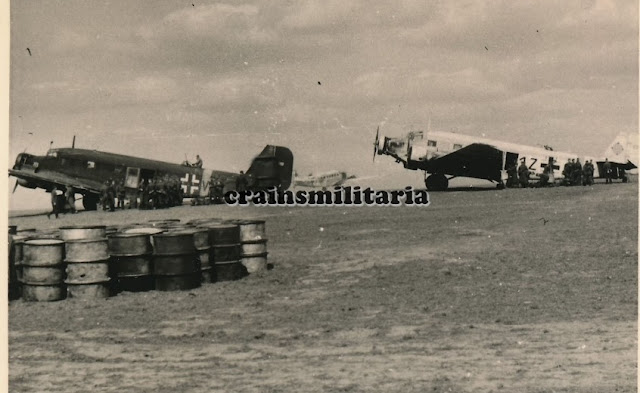 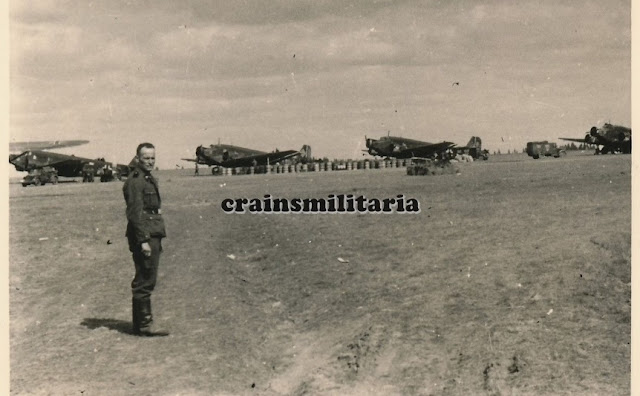 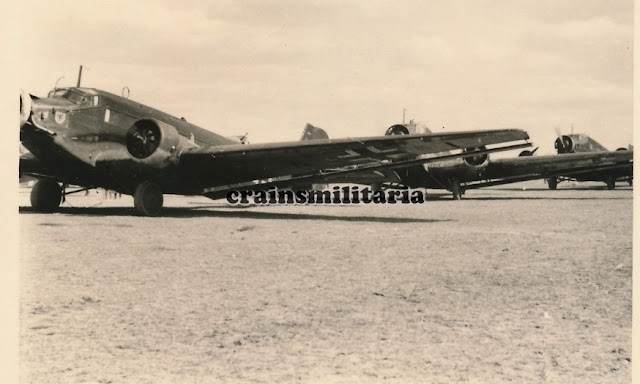 on offer here
Posted by FalkeEins at 04:48