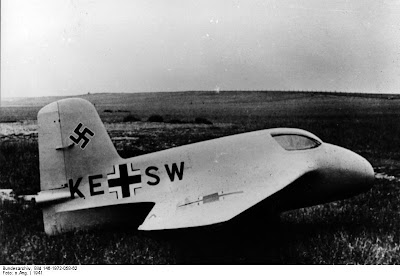 
The Me 163 Komet was perhaps the most unique aircraft design of the Second World War. Developed from Alexander Lippisch's engine-less and tail-less glider design, a rocket-powered aircraft evolved into the distinctive swept-wing 'point interceptor' design that was as dangerous to its pilot as it was to American bombers. The clip below from the Dogfights 'Secret Weapons' programme recreates 1./JG400 rocket pilot Feldwebel Siegfried Schubert's two 'kill' sortie of 24 August 1944, following which General der Jagdflieger Adolf Galland issued a memorandum declaring the Me 163 fully operational. Noted authorities Barrett Tillman and Colin Heaton analyse Schubert's sortie and discuss the evolution of the radical Komet design. Well worth viewing. Click once to watch here.

1./JG400 was established during March 1944. The highly volatile fuel mix and temperamental engines, combined with orders forbidding operational sorties put a brake on introduction of the type into 'service' until a move to Brandis in July 1944. Within weeks of the unit's arrival at Brandis 1./JG 400 was to be involved in six major combats against USAAF bomber fleets, the first taking place on 28 July 1944. The Komets were usually deployed singly or in pairs. Komets attacked  at greater speeds than P-51s and P-47s could dive in an attempt to intercept them. A typical Me 163 tactic was to zoom climb through the bomber formations at 9,000 m (30,000 ft), level out at an altitude of 10,700–12,000 m (35,100–39,000 ft), then dive through the formation again. This approach afforded the pilot two brief chances to fire a few rounds from his cannon before gliding back to his airfield.

As the cockpit was unpressurized, the operational ceiling was limited by what the pilot could endure for several minutes while breathing oxygen from a mask, without losing consciousness. Pilots underwent altitude-chamber training to harden them against the rigors of operating in the thin air of the stratosphere without a pressure suit. Special low-fibre diets were prepared for pilots, as wind in the gastrointestinal tract would expand rapidly during ascent.

JG 400's mission was to provide additional protection for the Leuna synthetic fuel works which were raided particularly heavily and frequently as the USAAF moved away from city area bombing to targeting fuel production in mid-1944. A further Staffel was stationed at Stargard near Stettin to protect the large synthetic plant at Politz. Further defensive units of rocket fighters were planned for Berlin, the Ruhr and the German Bight.

The first actions involving the Me 163 occurred at the end of July, when two USAAF B-17 Flying Fortress were attacked without confirmed kills. Combat operations continued throug to early 1945. During this time, there were nine confirmed kills with 14 Me 163s lost. Feldwebel Siegfried Schubert was the most successful pilot, with three bombers to his credit.

Allied fighter pilots had soon noted the short duration of the powered flight -when the engine cut out the unpowered Komet was vulnerable. However, the Komet was extremely manoeuvrable and could pull out of a turn much later than any Allied fighter. Another Allied tactic was to attack the fields the Komets operated from and they were strafed after the Me 163s landed. Establishing a defensive perimeter with anti-aircraft guns ensured that Allied fighters avoided these bases. At the end of 1944, 91 aircraft had been delivered to JG 400 but a continuous lack of fuel had kept most of them grounded. It was clear that the original plan for a huge network of Me 163 bases was never going to happen. Up to that point, JG 400 had lost merely six aircraft due to the enemy actions. Nine were lost to other causes, remarkably low for such a revolutionary and technically advanced aircraft.
Posted by FalkeEins at 10:13