Did the Bf 109 G-10 and K-4 variants feature a wider track undercarriage ?


I read the following statement on a forum a while back;

"..if I remember correctly, the track of the undercarriage was widened on the G-10/K-4 compared to earlier variants. The Revell G-10 kit made the mounting points further apart, IIRC, but failed to depict the cutouts in the wheel bays that were inboard of the main gear struts. See the link to detailed photos and description of the G-10 as published by IPMS Stockholm..."

And on the IPMS site you can read;

" ....Despite the seemingly identical configuration, the undercarriage of the G-10 and K-4 was miles away from that of the earlier variants. Some of the changes are visible here: the undercarriage track was considerably widened, resulting in the prominent "gaps" between the leg and the inner end of the wheel well, the legs were made thicker and the wheel covers split into two-part assemblies...."

To be honest this is the first time I have read of a wider track undercarriage in the G-10 series. I immediately wondered how this would have been feasible, given that the undercarriage legs were fitted to the fuselage and not the wings. And if it applied to the G-10, the same must have been the case for the K-4, the G-10 being intended to supplement the K-4 production being technically as similar as possible to the K-series. I spoke to one notable 'Experte' much more knowledgeable on the Bf 109. He responded with the following;

"..I have found nothing that would substantiate the widening of the undercarriage track on the G-10 series, or the K-4. Whatever the photos on the IPMS site show, it doesn’t match with the technical documents I have. The track of the landing gear of the G-6 series is given as 2062 mm in the Handbücher of the G-5, G-6 and G-8 series, wheres in the respective Handbücher of the G-10 and K-4 series the track is given as 2065 / 2100 mm. The difference between the earlier series and the G-10/K-4 seems to come solely from the different main wheels used, the 2065 mm referring to the original main wheels, the 2100 mm to the enlarged 690 x 160 wheels. As you stated, G-10s were equipped with the original G-6 wings and with those of the K-4 with the large upper-surface bulge. The original G-6 wings with the small wheel blisters couldn’t have been used if the track was widened. So in my opinion the attachment points of the undercarriage legs remained unchanged throughout..." 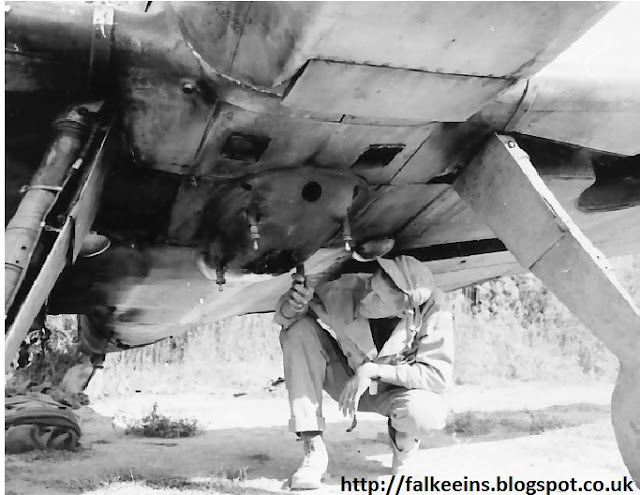 Churchill and Chamberlain on Knullenkopfstaffel Dornier Do 17 P

In 2016 German publisher Flechsig produced one of the best and absorbing Luftwaffe books of recent years- " Die Knullenkopfstaffel -Fernaufklärung mit der 1. Staffel/Aufklärungsgruppe 123 ", a history of long-range recce Staffel 1.(F)/123. The Staffel 'mascot' or Knullenkopf  - a bullet-headed airman holding a telescope to his eye - translates literally as 'knucklehead', an 'insult' originally used by the CO to motivate his airmen according to one account! Authored by Austrian Harry Rabeder, the book covers the activities of the long-range Luftwaffe reconnaissance squadron in some 336 well-illustrated landscape format pages (English-language edition also available). The history of this Staffel goes back to the start of WWII when the unit flew the Dornier Do 17 P before switching to the Bf 110 and Ju 88 and then to the Bf 109. This unit should be of particular interest to both British and French readers as 1.(F)/123 was based in France for long periods and made numerous flights over the UK. The book featured some interesting appendices including the list of known losses as well as a listing of Knight's Cross recipients who flew with the Staffel and more than demonstrated that less 'glamorous' can be just as interesting..

Author Rabeder includes in his book two unfortunately rather small-ish photos of one of the most fascinating over-size emblems I’ve seen on a Luftwaffe machine - the so-called ‘Churchill- Chamberlain’ emblem depicting the-then British PM (early 1940) and the First Lord of the Admiralty (Churchill) under attack from all sides on their small island. In a recent article published in ‘Avions’ magazine ( issue #225 'Luftwaffe special') covering the activities over France of the various Fernaufklärungsstaffeln -including 1.(F)/123- during the Phoney War, article author Pierre Brouez published three different images of the emblem as displayed on the Dornier Do 17 P coded "4U+FH" flown by Lt. Hans Mühlbauer (Beobachter) and crew. 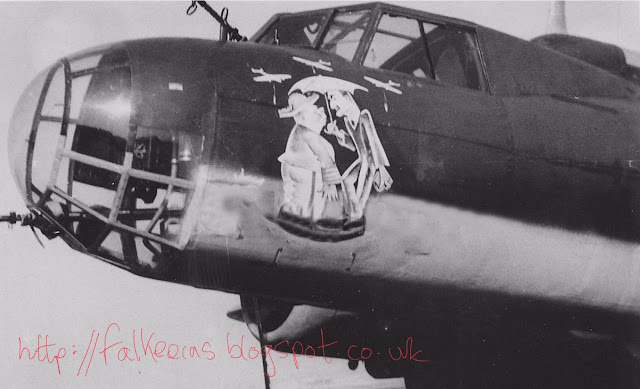 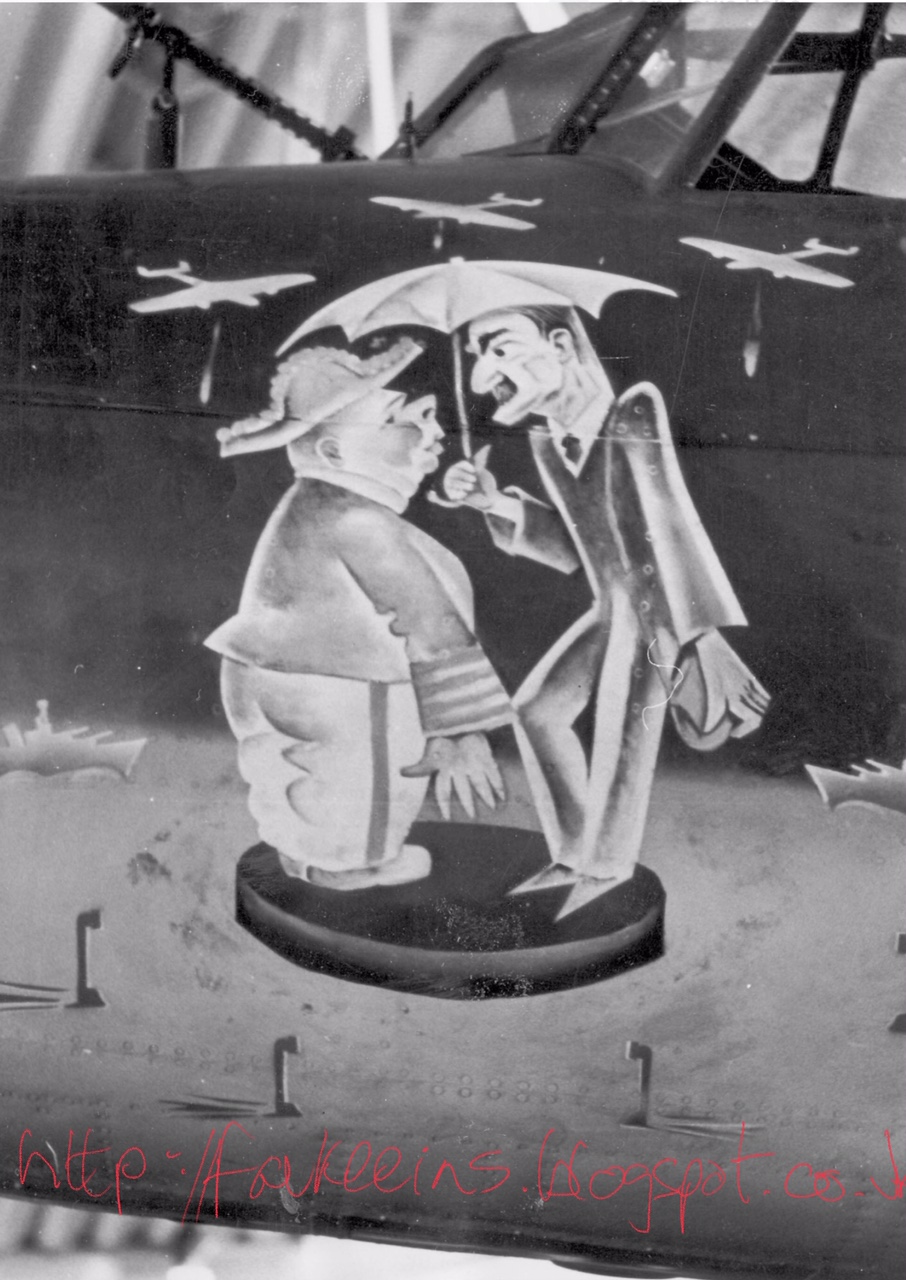 Mühlbauer's machine with its 'over-size' nose emblem and, below, a general view of some of the aircraft operated by the Staffel. Note the two Do 17 P  twins have the 'Knullenkopf' badge displayed on the engine cowl. 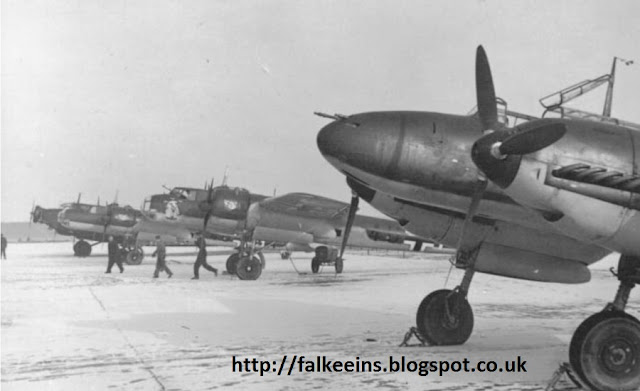 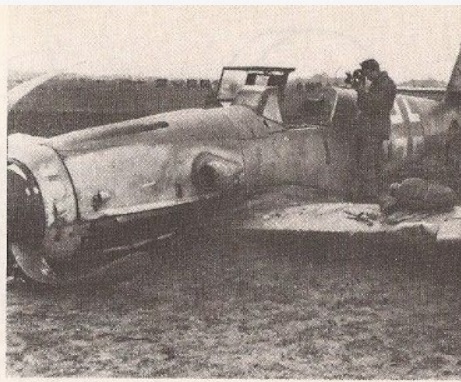 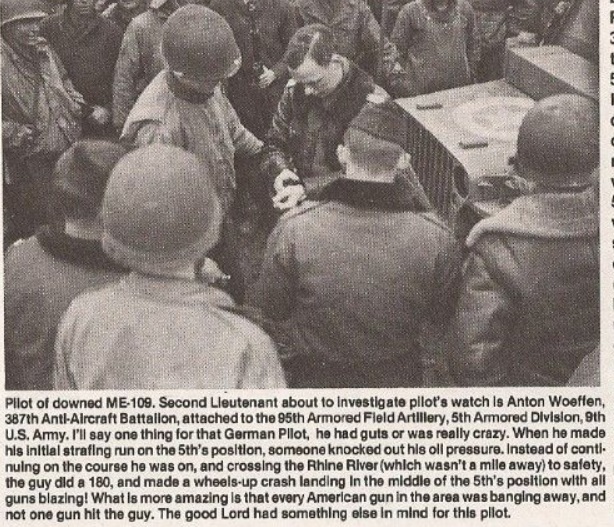 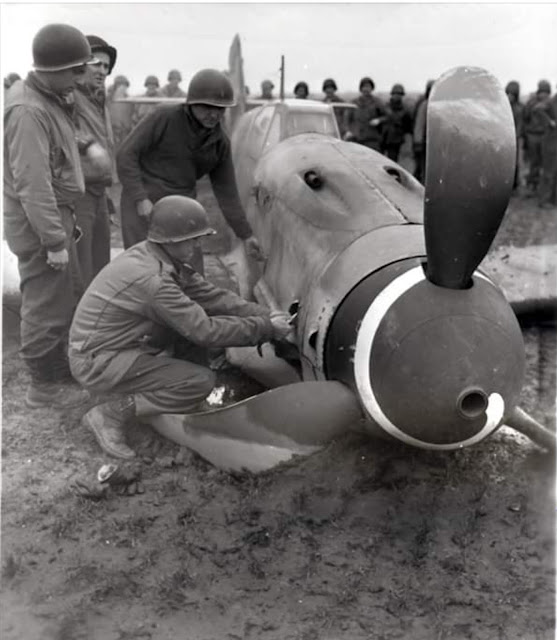 Above; US signals photo as posted on the Late War Bf 109 FB page.

Wöffen’s memoir ‘Ich war kein Jagdflieger As - Erinnerungen eines unbekannten Jagdfliegers’  ( '..recollections of an unknown fighter pilot' ) was ‘serialised’ in Jägerblatt during 1983 and translated into Finnish.

"..it is nearly forty years since I last flew a Bf 109 Gustav ..March 11, 1945. That clear sunny Sunday morning I was tasked as Staffelführer with leading a Schwarm of four 6./JG 27 Bf 109s up from Hopsten near Rheine on a recce sortie in the sector Wesel-Rheinberg-Duisberg where German troops still held a bridgehead on the western bank of the Rhine. There were signs that the Americans were preparing an all-out assault and I had to ascertain more  - a somewhat hopeless task. But then at that time so much appeared to be hopeless and pointless. Should we encounter artillery ranging and spotting machines in the air then we were authorised to shoot them down. Such machines were making life very difficult for our troops on the ground. Once airborne we flew at tree-top height in the direction of the river Rhine - skipping over trees, streetlights and houses we had to fly very carefully to avoid contact with obstacles. This was especially the case for those of my comrades flying behind the Verbandsführer  (formation leader). Even for myself it was not easy to navigate at such low altitudes. At 500 km/h  - the sort of speeds we could attain with full armament in normal flight - you could not see much at all. Moments after arriving over Wesel I spotted an 'Auster' climbing at about 100 meters altitude directly ahead of me. What then followed, happened very quickly.. I flicked up the armament safety catch on the control column for the 2cm cannon and the two cowl MG 131s and pulling up under the enemy machine gave the Auster a burst from all three guns. Suddenly I felt a blow in the engine. The prop continued to spin  -  but at a much reduced rate of revolutions. Smoke started to seep into the cockpit. I continued to climb hoping to reach a 'safe' altitude to bail out but my speed was decreasing far too quickly. I could see tracers from all sides rising towards me and immediately pushed the nose down. I had arrived directly over the American lines. I could see fire coming from an anti-aircraft battery and, taking aim in so far as I could, gave the Amis on the ground a burst of fire. By now I was approaching the ground and, although the smoke was hampering my efforts, prepared for a crash-landing..I saw high tension wires flitting past the cockpit ..above my head. I pulled back hard on the stick. The machine hit the ground with an almighty crash and bumping and jolting slid along for some distance. Suddenly everything went quiet. I opened the hood and climbed out. I had made a perfect belly landing and had escaped completely unscathed. I had been lucky. Just thirty meters in front of me was a railway embankment which I could just as easily have plowed into. Running towards me from all directions were American soldiers. Standing on the port wing I leaned back into the cockpit and as I started to tear up my map I heard loud shouting behind me..." Hands up!" 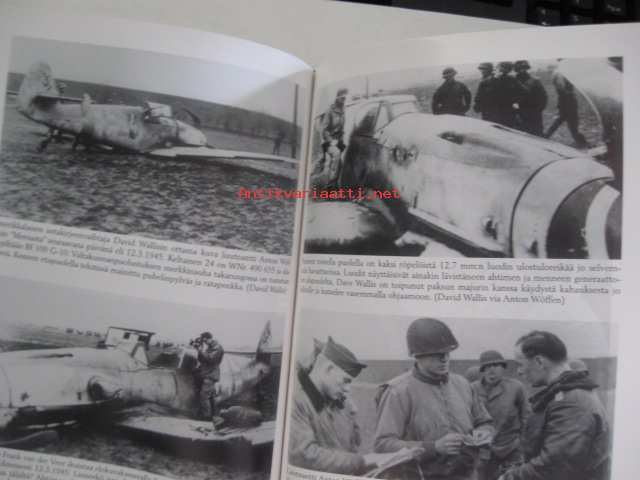 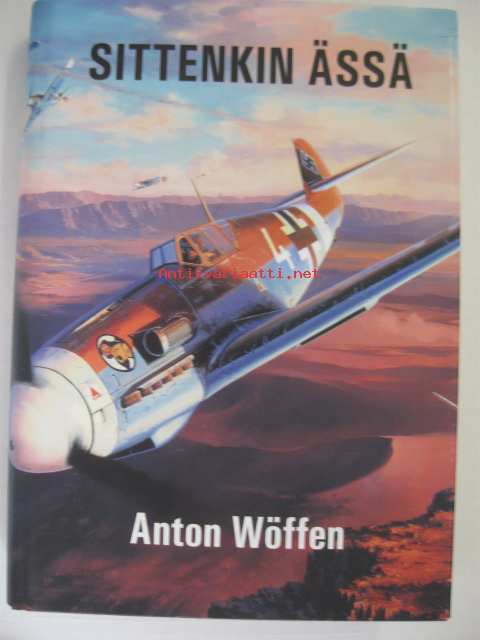 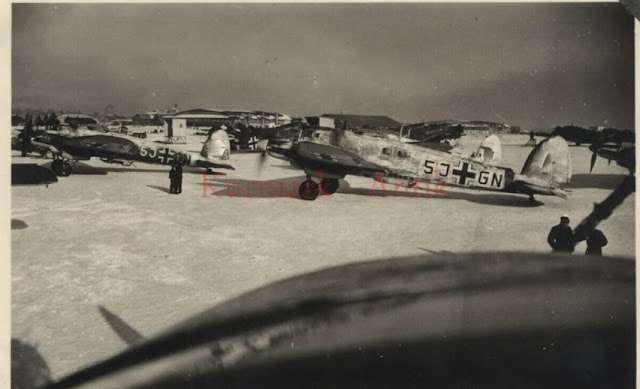 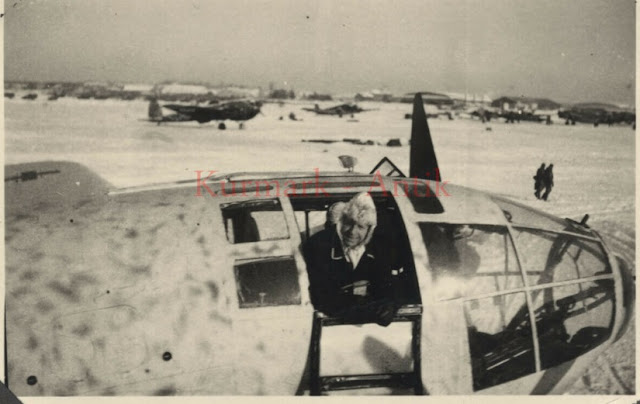 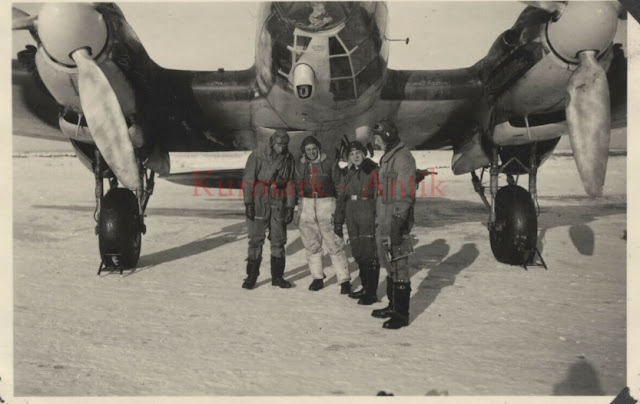 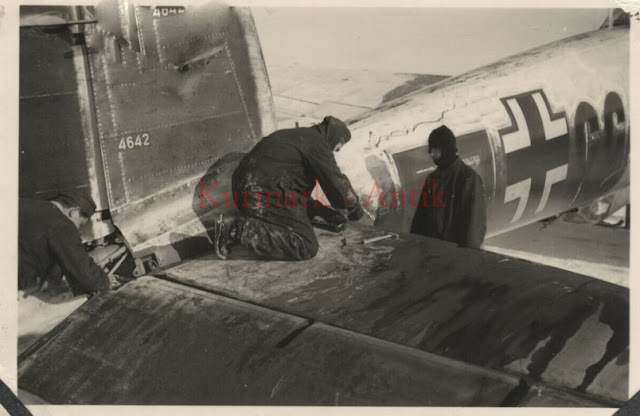 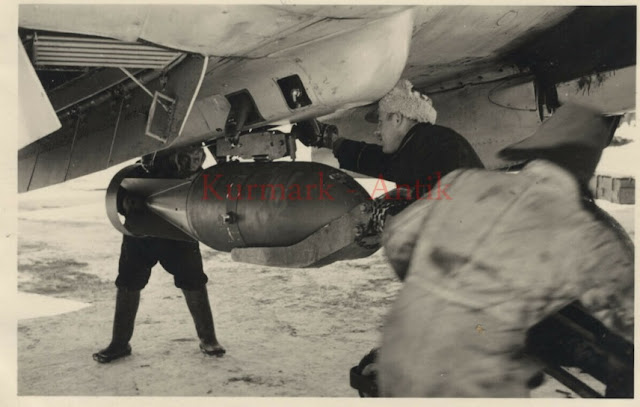 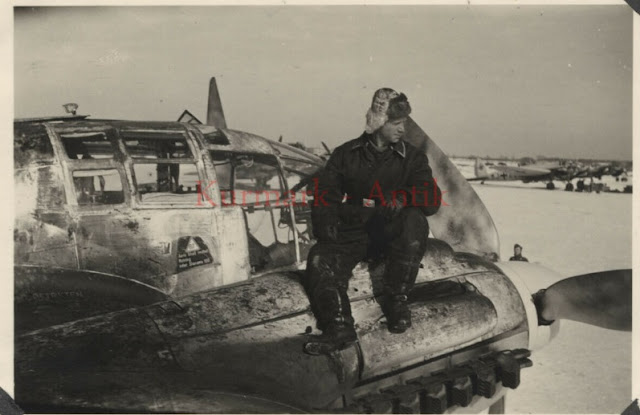 on offer here
Posted by FalkeEins at 10:28

I was recently in touch with master-modeler Floyd Werner after reading his SKG Fw 190 build report in SAMI for August 2018 ( yes, I'm a bit behind on my reading). Floyd kindly sent through some images of his marvellous representation of Fw. Otto Bechtold's Fw 190 A-4 WNr.7555 as seen at West Malling, Kent on April 17, 1943. Running low on fuel, after an abortive attempt to raid installations along the Thames at London's Isle of Dogs, Bechtold put down on the airfield. Bechtold's machine had an application of black distemper over the regulation 74/75/76 and after arriving in the UK various warnings were chalked up on the aircraft including a request to not enter the cockpit.. I asked Floyd if he was intending to produce his self-made 'Do not touch' decals in his Werner's Wings range at all.

Floyd replied....." I had planned to release these decals as a stand alone sheet but I haven’t because the left side of the fuselage is speculative.  I’m not aware of photos of that side.  If I had photos of that side so we could draw up the design I would send them off to the printers immediately.  With the release of the new Eduard ‘Jabo’ set it felt right [to complete this build]...perhaps someone in your readership might be able to provide confirmation of the inscription on the port side of this machine? "

Well that is a shame about the port side. I have some good quality images of this machine, and Floyd is right, not one comes close to showing anything of that part of the airframe.. can anyone out there help ?  In the meantime keep an eye on Werner's Wings. Click on the images to view in 'full-screen' mode.. 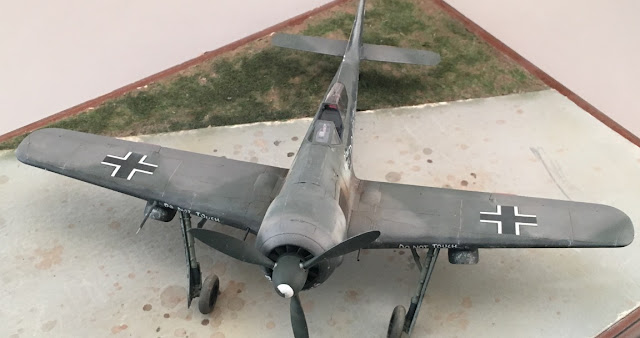 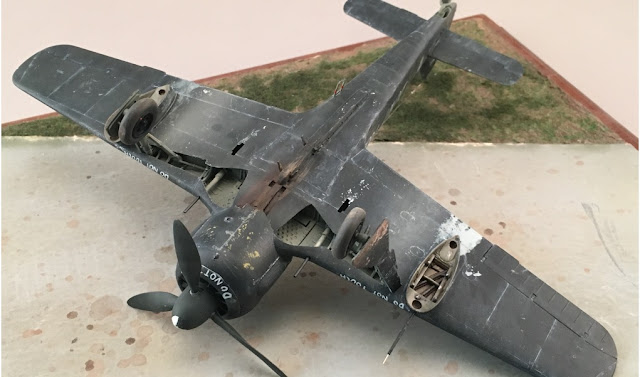