At the risk of stating the obvious it is sometimes worth pointing out that most Luftwaffe fighter pilots were not aces - nor would they ever become aces. Fritz Gehrmann was one such fighter pilot. Having just completed an article on wilde Sau single-engine night fighter pilots, Gehrmann's career is however of particular interest to me. He flew - albeit briefly - with 10./ JG 301, the only Staffel to actually exist of a planned IV. Gruppe of JG 301. JG 301 was of course one of the 'original' wilde Sau Geschwader established following the early 'successes' of Herrmann's so-called Jagdgruppe Herrmann..... 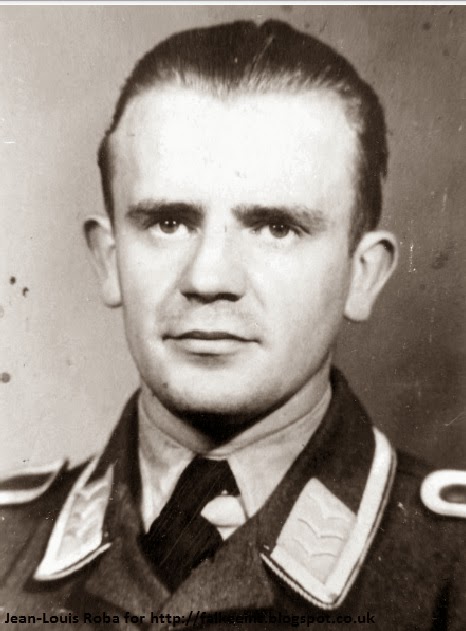 Gehrmann joined 10. Staffel  JG 301 in May 1944 after completing night fighter training at Altenburg. During the first half of 1944 10./JG 301 was tasked with protecting the oilfields at Ploesti, by day and by night. However like most wilde Sau units, sorties and raid interceptions by day progressively overtook night time patrols and came to dominate the activities of the Staffel- 10./ JG 301 would eventually be re-designated 10./ JG 77.

At the outbreak of war in 1939 Gehrmann was not a pilot - he was a member of the Stab I./ LG 2 and participated in the campaigns in the West as an observer/gunner. He had spent the winter of 1940- 1941 on the Channel coast in France as I./ LG 2 operated over England. Early in 1941 he was accepted for pilot training and as an Uffz. he spent most of the year at the FFS A/B 126 (Flugzeugführerschule) before a posting to Stubendorf (Silesia), home of FFS A/B 110. This particular pilot training school was to become Blindflugschule 11  in July 1943 (instrument and 'blind' flying training) and here Gehrmann made another 400 training flights, having already made over 400 flights from Gotha and Schroda-Sud with FFS A/B 126..

On 16 December 1943 he was posted to 2./ JG 110 at Altenburg (Blindflugschule 10 - later re-designated JG 110) where he would fly intensively to complete his training, specialising in single-engine night flying; for example on one day, 30 December 1943, he made no fewer than twenty (20) flights at the controls of the unit's Bf 108, Go 145 and Ar 96 trainers. On 8 February 1944 he made his 1165th flight (Arado 96), just prior to getting airborne for the first time at the controls of the Bf 109. He made a number of flights in one of the school's elderly Bf 109 Emils before flying throughout the month of March 1944 on the Bf 109 Gustav. On 1 April 1944 Gehrmann was ready for his first front-line posting - 7./ JG 301 based in Wien-Seyring. This Staffel subsequently moved to Gross-Sachensheim and Gehrmann made another forty training flights during his time with this unit.

On 10 May 1944 came the posting to Romania, Gehrmann arriving in Bucharest by train. He had completed well over one thousand flights and had hundreds of hours in his Flugbuch. 10./ JG 301 flew the Bf 109 G-6/R 6 mounting underwing gondolas and Gehrmann spent most of the month of May 1944 acclimatising. His first flight with 10./ JG 301 came on 16 May and his Flugbuch reveals a number of training flights in "Black 8" through the month.  His first combat sortie on 31 May 1944 was also at the controls of 'Black 8'.

On the last day of the month of May 1944 the 15th AF made its second trip of the month to Ploesti, targeting the Concordia Vega oil refinery - over 500 bombers were escorted by 240 P-51s. According to the 461st BG report " in defense of the target the enemy added smoke screens to his aggressive fighter resistance and flak concentration ..".

Having trained as a night fighter Gehrmann had the misfortune to be scrambled by day against this armada  - on his first combat sortie. Although a seasoned aviator he was no day fighter pilot. Running into a gaggle of aggressively flown P-51s while attempting to locate the bombers, he stood little chance. His Bf 109 G-6 'Black 8' WNr. 163089) was shot down over Ciocanesti, north-east of Bucharest. His first combat sortie also proved to be his last - he was killed in the subsequent crash. His Staffelkapitän Oblt. Dr. Hans-Günther Kretschmer was also shot down in the same action ("Black 5" WNr. 412236) - but escaped with injuries. On 31 May 1944 10./JG 301 sustained heavy losses - at least five Bf 109s shot down and two pilots KIA. 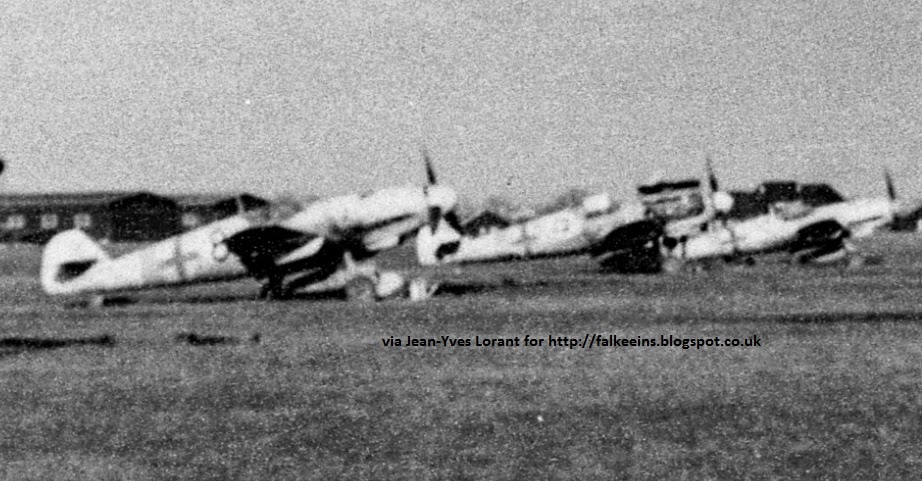 Above; a line-up of 10./JG 301 machines at Targusorul Nou (Ploesti) during May 1944. Note 'Black 8' in the foreground. The aircraft in the picture are Bf 109 G-6/R6 fighters with the underwing 20mm gondolas. The machines  appear to be sporting a very light coloured night fighter finish, possibly even a winter scheme and have a narrow yellow fuselage band aft of the Balkenkreuz. Gehrmann's Flugbuch confirms that the Staffel numbers are black..

Gehrmann's career in the Luftwaffe was interesting on a number of counts; the large number of flights, over 1,270, and the hundreds of hours spent at the controls of a variety of machines; training as a wilde Sau night fighter only to be committed by day on his first sortie and falling victim to a highly trained, aggressive and numerically superior enemy. It is easy to imagine how hundreds more new, young - and far less experienced - Luftwaffe fighter pilots must have succumbed to the same fate during 1944.. 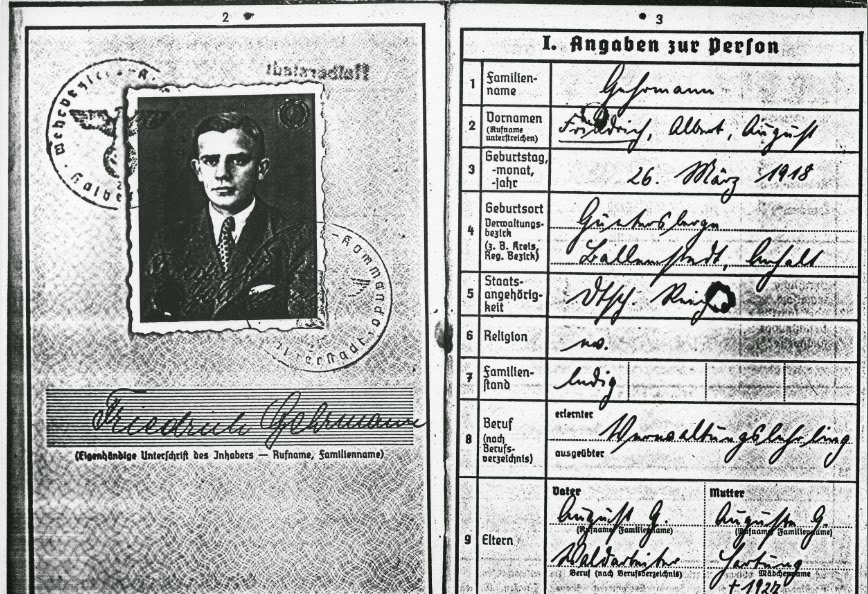 Below; note the transcription error on Gehrmann's date of death below in his Wehrpass entered in the section " aktiver Wehrdienst " or 'active service' - he was KIA on 31 May. So much for the accuracy of 'official' records ! 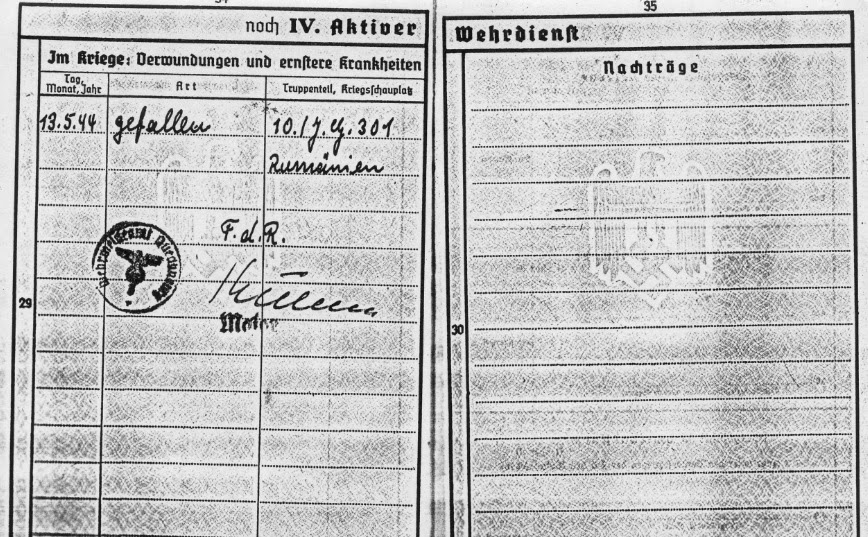 Many thanks to Jean-Louis Roba for his assistance with this post. 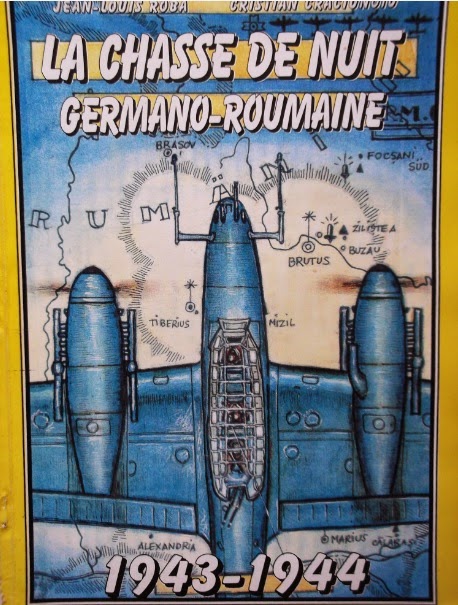 
Friedrich of Hptm. Heinz Bär, appointed Kommandeur of I. Gruppe JG 77 on 10 May 1942, and photographed here a short time afterwards in Sicily. Note the additional thirteen victory Balken, each surmounted by a red star that have been added to the rudder score beneath the wreathed 100...(see 'die Rote 13 von Heinz Bär' by Hans Lächler in 'Jet & Prop' 2/91) 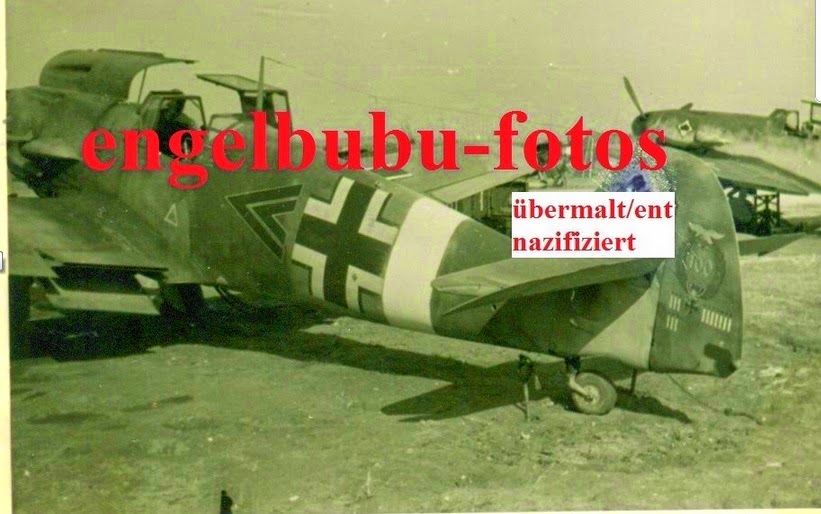 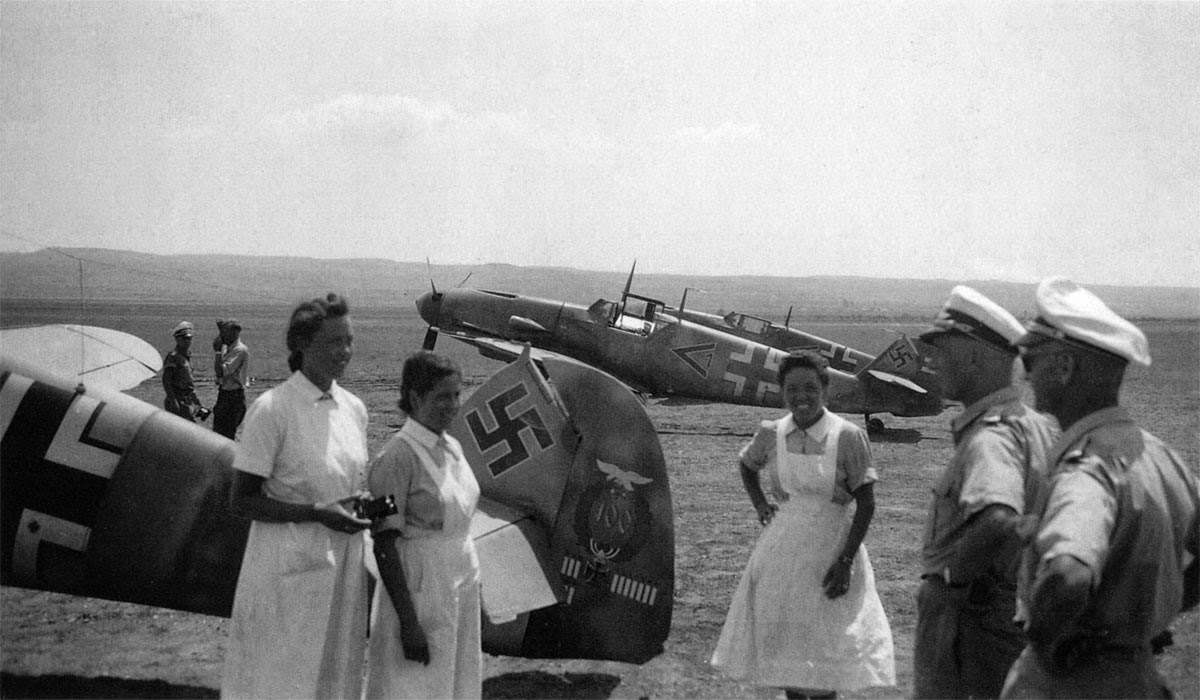 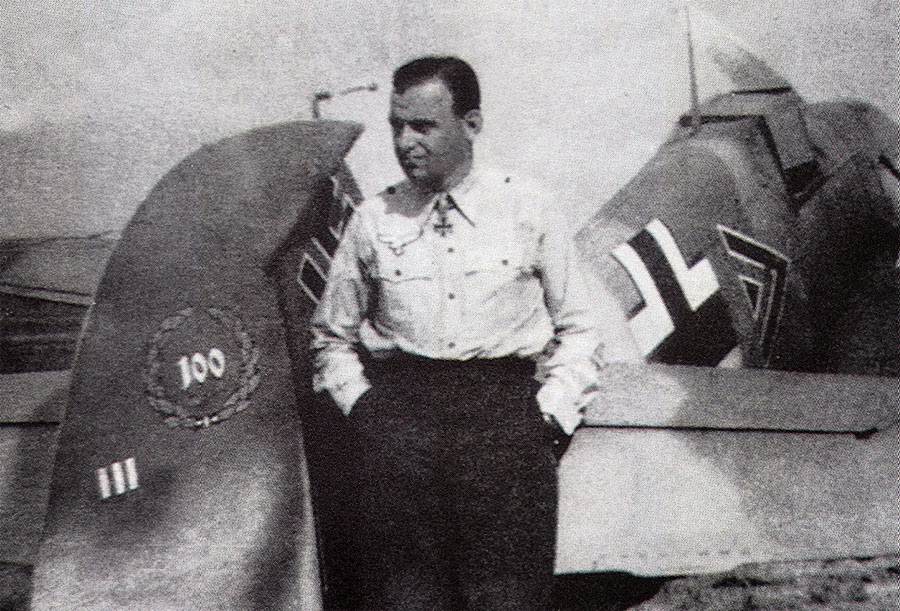 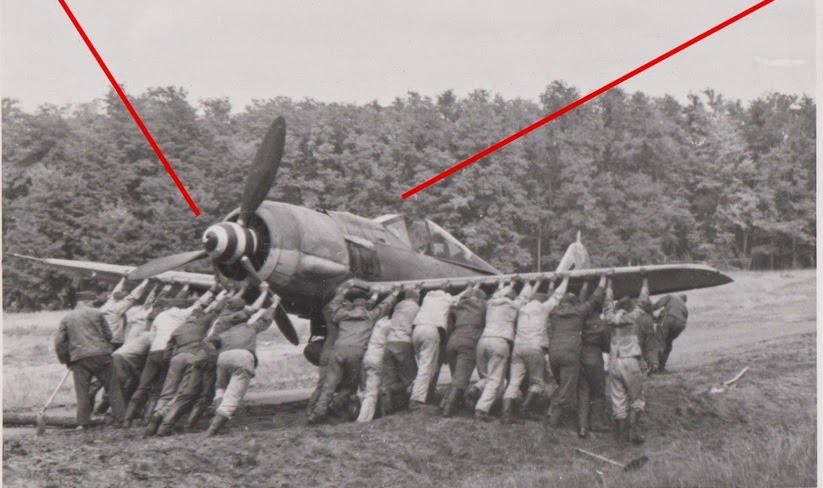 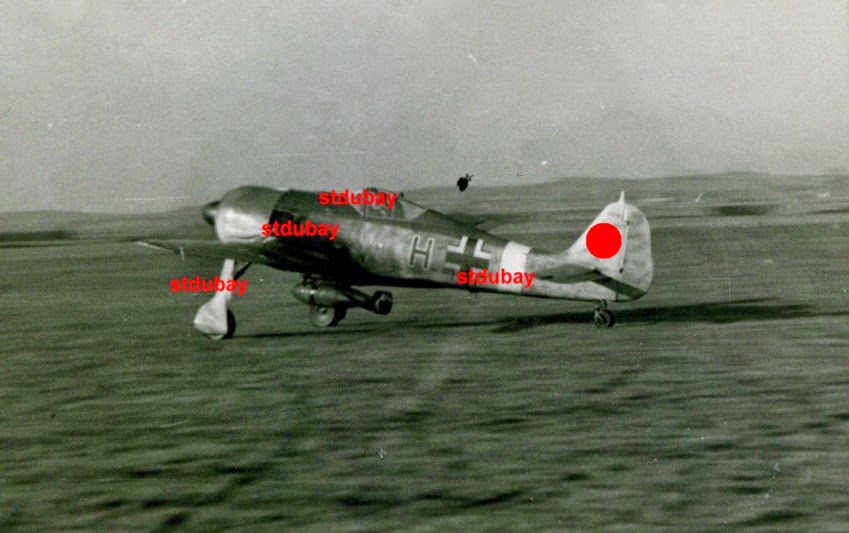 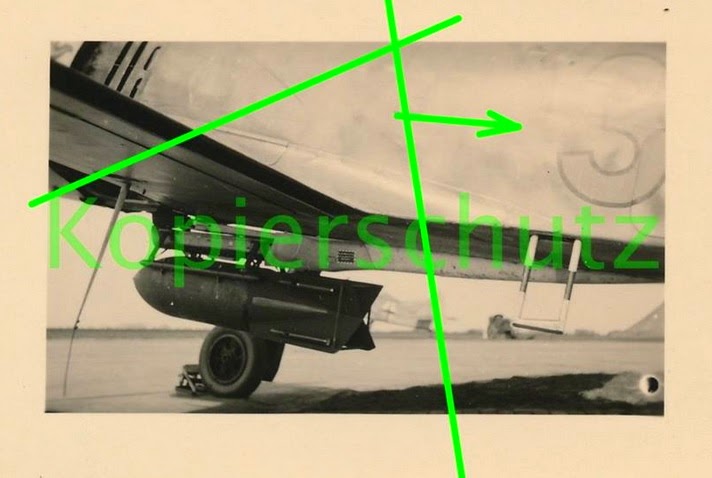 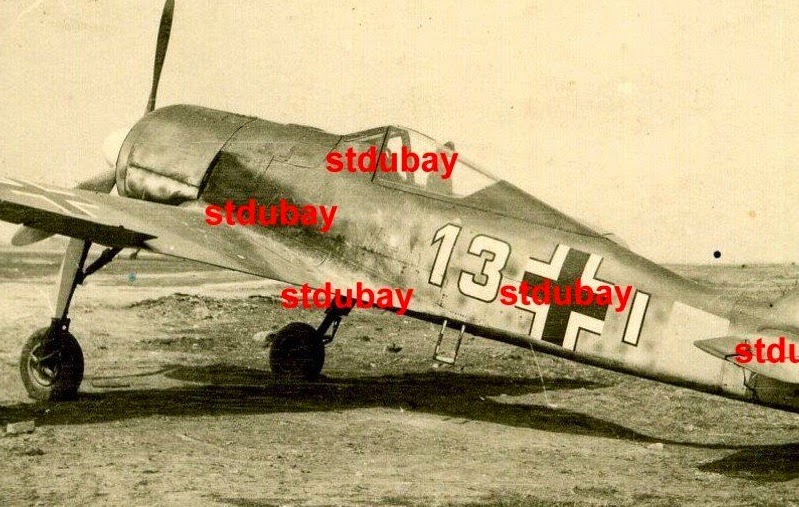 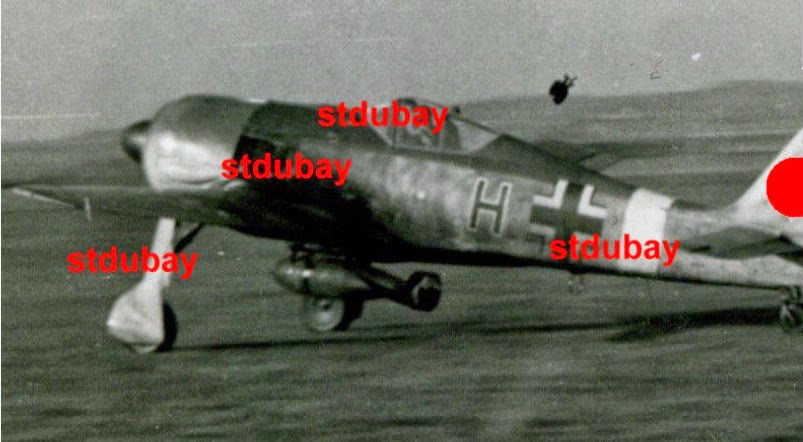 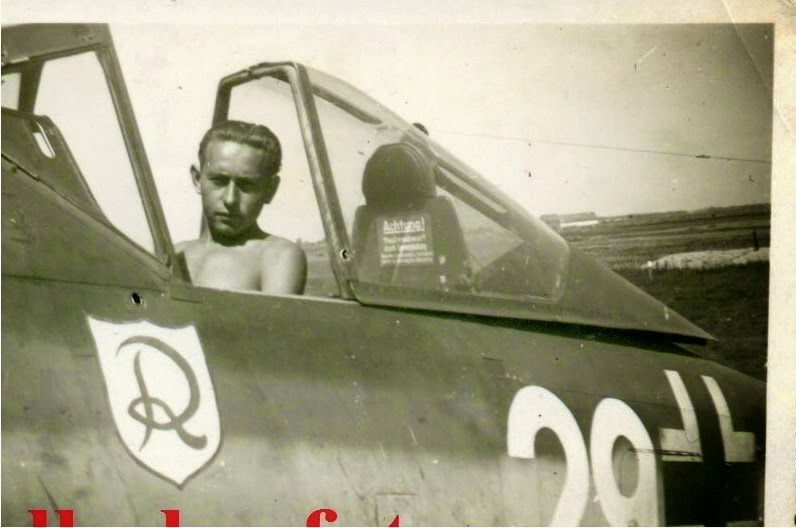 
Do 217 J equipped with FuG 212 Lichtenstein BC antenna array deployed in the Nachtjagd role (possibly II./ NJG 1) with Englandblitz Wappen 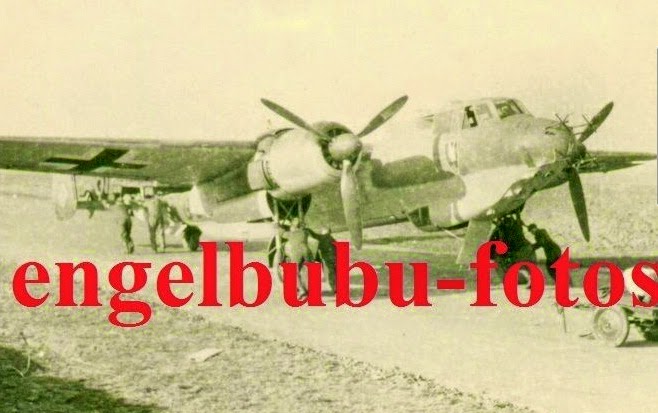 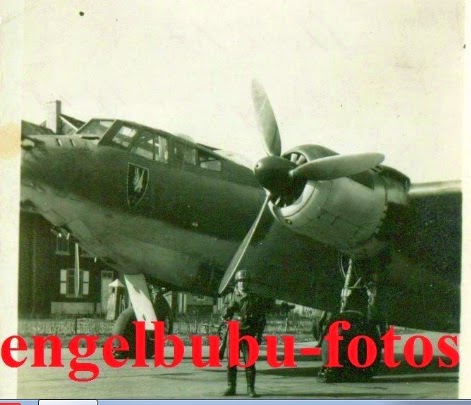 More Do 217 pictures on this blog