I expect you are all familiar with the work of master Swiss modeller Franck Oudin, especially as Franck's work is regularly published in Tamiya Model Magazine and elsewhere. Here is his recently completed Zoukei Moura Ta 152 covered elsewhere on this blog. 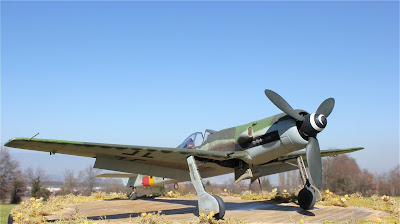 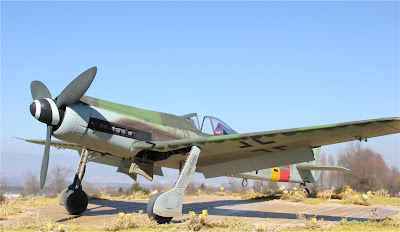 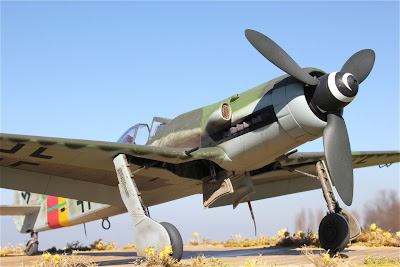 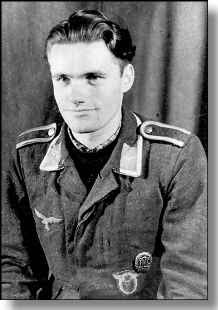 Here's something I prepared for one of the Kagero Fw 190 monographs  - an account by Uffz. Karl-Heinz Kabus who recorded his reminiscences of sorties on the Eastern Front, spring 1945, while based at Strausberg near Berlin. Only a brief paragraph or two was retained in the book.

Kabus was a young FW 190 pilot serving with 3. Staffel of Jagdgeschwader 11. With the war long since lost, his report paints a vivid picture of the hopeless final months for the defenders of Berlin and details some of the senseless sorties ordered as the Russians drew ever closer. (Translation copyright Neil Page, 2007)


".. On 3 February 1945 we moved once again, this time from Finow to Strausberg. Here our accomodation was good and the purpose-built barracks were still largely undamaged. We were able able to settle in for what would be a comparatively lengthy stay. Our proximity to Berlin gave rise to expectations of being able to renew contact with my parents and possibly even see them again after a long period away from home. The only way of getting to Berlin officially was through the ‘Läusetrick’ - the lice ploy - an official movement order only available to those who were sent to Berlin for 'de-lousing'. The small village of Hermersdorf bei Müncheberg also lay en route and it was here that my grand-parents, uncles and aunts lived. I'd spent most of my childhood holidays here......

Back to the events of February 1945. We were in the air on most days. February 8 was no exception. This was the first occasion on which I had flown a Jabo sortie in my FW 190 although this was to become our principal mission over the coming weeks. We chiefly carried 250-kg bombs or occasionally 500-kg cannisters which were jettisoned over enemy troop and vehicle concentrations around Zellin, Mohrin, Soldin as well as Pyritz (to the east of the Oder) and eventually over the Russian bridgehead and pontoon bridges around Göritz south of Küstrin. We fighter pilots would henceforth be employed primarily as Jagdbombenflieger - fighter bombers...


" ...The Russian bridgehead in the vicinity of Göritz was a real headache. Soviet combat engineers had thrown a pontoon bridge across the river. This structure was the only crossing in the area capable of bearing the weight of the Soviet 'Stalin' heavy tank. We were tasked with attacking the bridge with bombs and cannon fire and putting it out of commission. During the first weeks of March we flew time and again against this target - and registered very little in the way of success. We had been trained as fighter pilots after all. We weren't bomber pilots - we must have hit everything in proximity to the bridge except for the bridge itself. Dive bombers based in Fürstenwalde were eventually charged with taking care of it. The day following an attack - or the day after at the latest - any damage would have been made good. Further up the Oder, the Soviets had stationed so-called 'pontoon groups'. Destroyed sections of a crossing were simply repaired again by floating 'bridge' sections downstream on the current and lashing them onto the remaining pontoon elements. It was enough to make you despair....

Where possible I took advantage of the return flight home from these Oder sorties to overfly Hermersdorf and to check whether everything was okay with my family. Apart from streams of refugees moving through the locality I discovered nothing untoward. We also saw lengthy columns of refugees moving east of the Oder. In many instances Russian tanks and combat vehicles had infiltrated the trains of horse-drawn carts, making it impossible for us to attack them from the air......

Opposite the aerodrome at Strausberg there was a cluster of large farm buildings - barns, stables, cowsheds and other buildings for animals. Many refugees from the eastern areas of the Reich were living here. Where possible we had struck up conversations with these people - what we heard of their terrible experiences as they fled the headlong Soviet advance gave us more than enough reasons to climb back up into our 'crates' day after day despite the hopelessness of the situation. The only thought at that time was to hold up the Russians at the Oder for as long as possible - the longer we could do this the further westwards the refugees could go....

In military terms our sorties were of less and less value by the day. The skies were initially relatively empty of aircraft but gradually we encountered more and more aeroplanes bearing the Soviet red star and our losses mounted accordingly. Many pilots only made it back to Strausberg with difficulty and then ended up crashing on the approach. One such was my Staffel comrade Leutnant Kalich, who smashed into the ground at the controls of his machine on 4 February 1945.


On 27 March I flew one of the more noteworthy sorties of this period. By now Küstrin had been cut off and had to be supplied from the air. A large formation was tasked with crossing the Oder at 2,000 to 3,000 metres altitude before letting down over the Warthe and flying back up to Küstrin at very low altitude to jettison the supply cannisters that were being transported. It would be our job to escort this formation as far as the Oder. Once there we were to swing onto a heading that would take us as far as Küstrin. Arriving over the town we were instructed to fire off rockets and signal flares in a gigantic display of fireworks and deliberately attempt to draw the attention of the Russian flak batteries, allowing the low flying re-supply ships to come in unmolested. I don't recall that the mission was a great success. The transport planes flew too low which meant that the cannisters shattered when they hit the ground or else they flew too high and the containers came down outside of the area still held by our comrades and fell into Russian hands. The sortie I flew on 27 March 1945 very nearly ended in disaster. As I threw my machine into a high speed dive one of my engine cowling panels flew off in the slipstream. I attempted to pull out of the dive - yanking hard on the stick- but to no avail. It was as if the control column had suddenly been encased in concrete and it resisted all attempts to budge it. It was only in the nick of time that I remembered that there was a small switch that would enable me to re-trim the tailplane - I quickly selected 'schwanzlastig' - tail heavy. Moments later - as the little electric motor whirred into action - the stick started to move back of its own accord. I don't recall what happened next as I had 'blacked-out'. When I came too the nose of my 190 was pointing skywards. That was enough for one day I thought and headed home - my crate was subsequently declared unserviceable.

Attacks on the bridges at Göritz continued without respite - we were no longer hauling bombs at this stage but flying escort cover for the Schlachtflieger. On 14 April 1945 we flew cover for so-called 'Mistel' combination aircraft - explosive-laden Ju88s 'flown' from a Me 109 or Fw 190, radio-guided into a ground target from the smaller 'piggy-back' fighter. After releasing the Ju 88, the Me 109 or Fw 190 returned home alone. Even the deployment of these contraptions was not enough to prevent the Soviets launching their next offensive on 16 April 1945. Early that morning we awoke to the sounds of rumbling coming from the east which were nothing like we had heard before. What in the past was mostly sporadic now increased in intensity and grew ever louder. Russian artillery was laying down a barrage of untold ferocity as a precursor to the final assault on Berlin.

We were soon ordered to go to cockpit readiness and it wasn't long before we were airborne. The first sorties were 'freie Jagd' - free hunt - missions. As the aircraft returned they were quickly replenished with fuel and munitions with their pilots remaining at cockpit readiness until ordered up again. Formation takeoffs differed considerably from our usual practise. The first Staffel - on the northern perimeter of the field close to the barracks - launched into their takeoff runs directly from the dispersal area, on a 170° heading across the field, while 2. Staffel - on the eastern side of the aerodrome - was ordered up on the firing of a signal flare. 1. Staffel were soon roaring over our dispersal on the southern side of the field, while 2. Staffel were kicking up more dust and dirt as they took off towards us. Then it was our turn. Our takeoff runs were made in a north-easterly direction across the field. Visibility was almost nil as a huge cloud of exhaust gases and dust hung over the airfield. The fact there were no incidents getting airborne in this fashion bordered on the miraculous. The Staffeln quickly formed up east of the field and that day I found myself alongside the machines of the Stab, among which was presumably the Gruppenkommandeur. It wasn't long before large enemy formations - twin-engine Boston bombers - loomed up out of the haze. The Stab flight headed towards them. The Bostons salvoed their pay loads and swung onto an easterly heading. We curved around onto their heading and closed in from astern. At a height of 2,500 metres and somewhere north of Letschin, targets were selected and we prepared to attack - there were no orders. I opened up from close range and quickly accounted for one of the enemy machines while more firing passes were flown against the other machines. With our magazines empty we had to break off and turn for home. That evening we were again airborne in Schwarm- and Rotte size formations heading east. Once again we came across Russian machines - IL-2 bombers - in the vicinity of Letschin.

Once again I was able to shoot down another Russian and return home safely. It was the same story on 18 April. On the return flight I took a quick detour via Hermersdorf. From afar I could see the church and some of the farmsteads burning. Russian tanks were positioned on the roads that led into the village from the east - there were large numbers of them on the road that led to Wulkow. I was forced to turn back by heavy ground fire.. On the evening of 18 April we moved from Strausberg to Berlin-Gatow..."