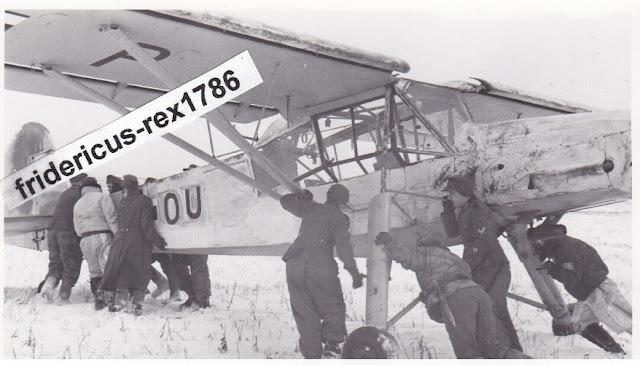 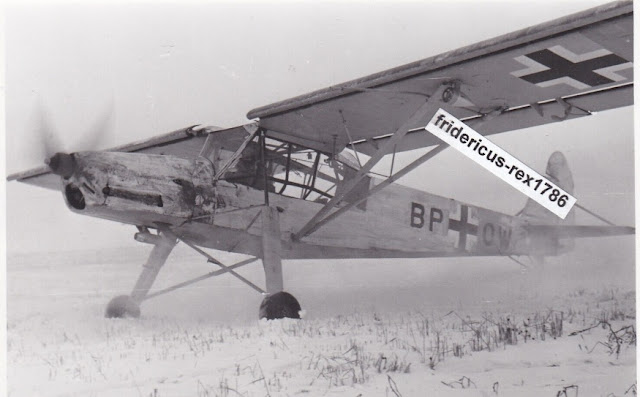 on offer here
Posted by FalkeEins at 11:19 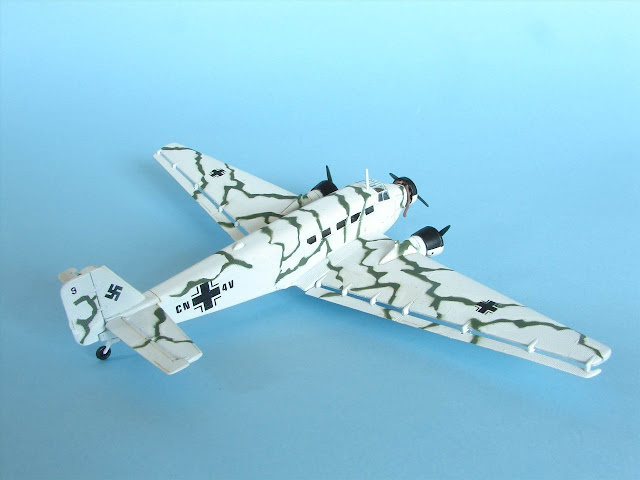 Model and model photos and custom-made decals via Jasonb13

" ..I have wanted to do this scheme for a while and picked up the Eduard Ju 52 'Airliner' kit in 1:144 scale in December 2017 and finally started it late last year. I got the decals custom made but they got lost in the Christmas post so had to be re-sent, so I only got it finished a couple of days ago.

It's a decent kit, but I had some fit issues, especially with the windows section, as the two strips for the windows are clear (both the windows themselves and the surrounding area) so it's hard to get them flush with the plastic fuselage sides. I also had some issues with the method I tried to use to do the camo, so all in all this isn't as 'smooth' a build as I would have liked! As to the camo scheme (see diagram of camo finish below) I'm pretty sure that it is finished overall white from what I can see from freezing the DVD and also pics online of the Swiss aircraft used. I think it looks like the movie aircraft - and I'm happy enough to have a model of such an iconic aircraft on the shelf - and from such an iconic film!...." 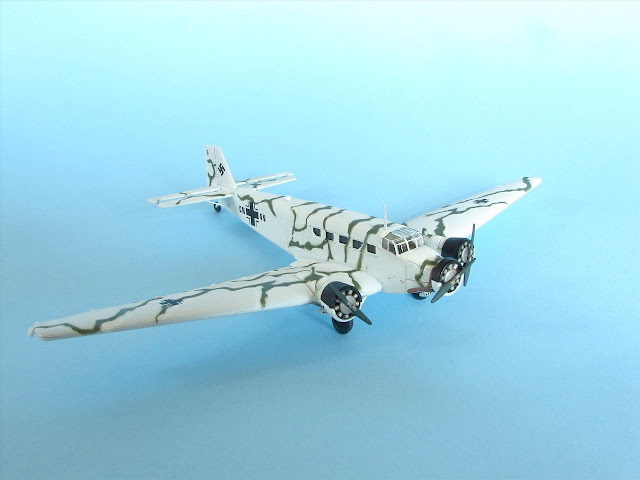 ".. the decals were done by Bedlam Creations (https://www.bedlamcreations.com/custom-waterslide-decals/) and the option I went with was the 'Thermal Resin ALPS' 2" x 3" which cost $10 + Shipping. Obviously, depending on the size of the decal sheets you want, it could cost more. I found them very helpful, and even though the original sheet was lost in the post, they reprinted and re-shipped free of charge..."

Below - a single click to view here. The final chase scene from the film "Where Eagles Dare" featuring the all-white Swiss Air Force Junkers Ju 52 rented for the filming. This machine is better known as Ju Air HB-HOT which sadly crashed on 4 August 2018 in Switzerland with the loss of all onboard. The Ju 52 was still in Swiss AF service at the time of filming "Where Eagles Dare" - note the over-painted Swiss AF roundels on the lower wing surfaces! Note too the ex-Swiss AF T-6s masquerading as Messerschmitts in the clip. Starring Richard Burton and Clint Eastwood of course. Filmed on location at Aigen i. Ennstal (military) airfield, Austria. 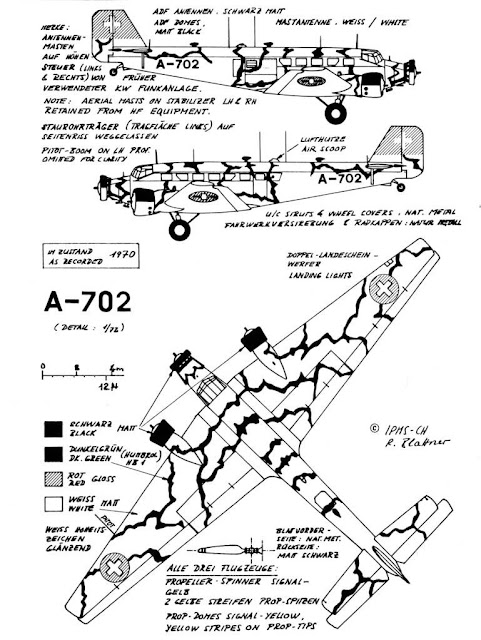 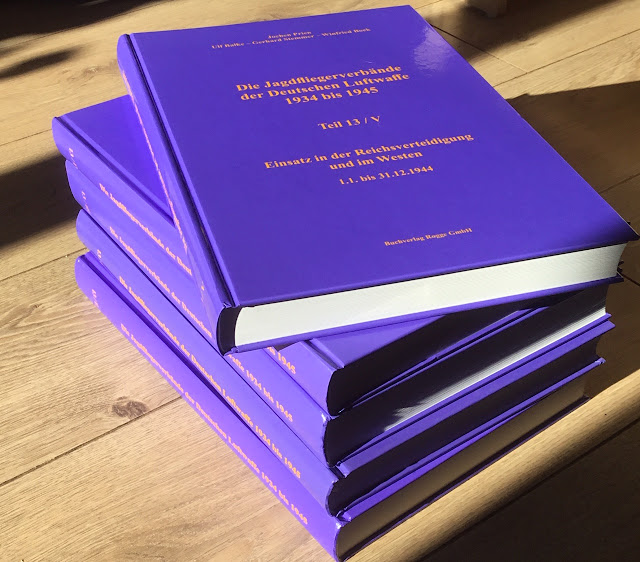 "... JFV Vol. 13/VI is also finished and will go to the printer before the end of the month. It will have appr. 300 pages and 150 + photos, covering JGs 76, 77, 300, 301, 302 as well as the parts of JG 5 fighting against the western allies from Norway. The miscellaneous units - Ergänzungs- and training units etc. - will be dealt with in an extra volume after the main series has been completed. Next will be Vol. 14, service in the MTO in 1944, which is almost finished. As of now it will be a single volume comprising some 500 pages and 300 + photos. The team has found a very important and effective addition - beginning with Vol. 13/V Ulf Balke will be an official member of the JFV team. He has accompanied the series from the very beginning and his input has been essential in many ways so far. We are very happy to have Ulf on board..."

Note these volumes can be purchased from jagdgeschwader.net or from publisher Buchverlag Rogge's ebay site here 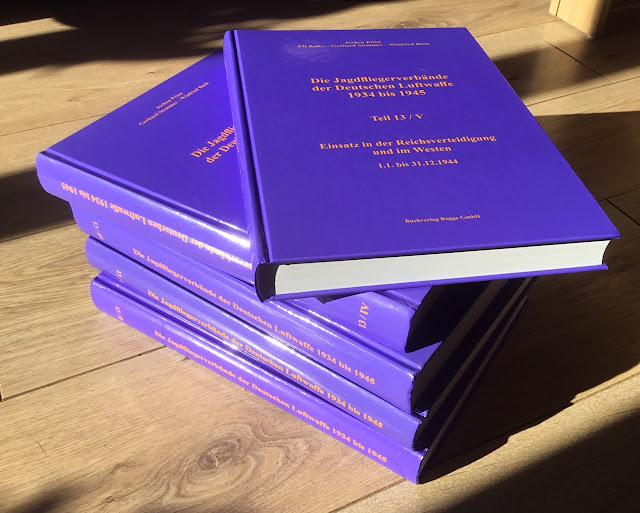 " The story behind the Luftwaffe books ";  author interview with Dr. Jochen Prien
Posted by FalkeEins at 12:32 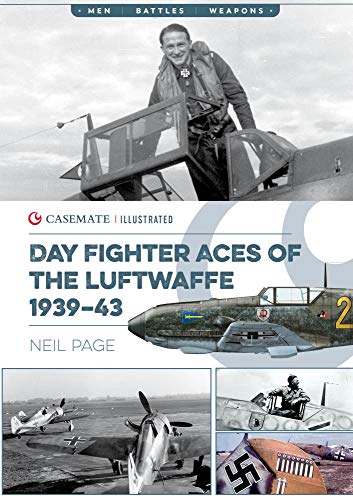 Due soon. Two new titles in the Casemate Illustrated series trace the story of the Tagjagd from 1939 through to the final days of the war in the form of a chronological account of the Luftwaffe's campaigns, interwoven with brief biographical details and the key moments in the careers of a host of lesser-known Luftwaffe aces. The two volumes will appeal to modellers and aircraft enthusiasts seeking a comprehensive and new account of German fighter pilots in action.

Features newly translated first-hand accounts and around 150 photos per volume on 128 thick glossy pages with quality artworks by Vincent Dhorne. Text/photos deliberately focus - especially in Book 2 - on those units not covered by Osprey - JG 4, JG 11, JG 77 and JG 300...

Military and aviation history enthusiasts have always been interested in the fighter pilots of Hitler's Luftwaffe. Some of their stories are extraordinary. Fighting from the Arctic Circle to the North African deserts, from the Caucasus in the East to Normandy in the West, the German fighter pilot flew and fought until he was shot down, "flown out," wounded or killed in action. A handful survived from "first to last." Around 500 Luftwaffe fighter pilots were awarded the Knight's Cross, accumulating huge numbers of missions flown. A similar number achieved more than 40 victories - more than the two leading USAF and RAF fighter pilots. 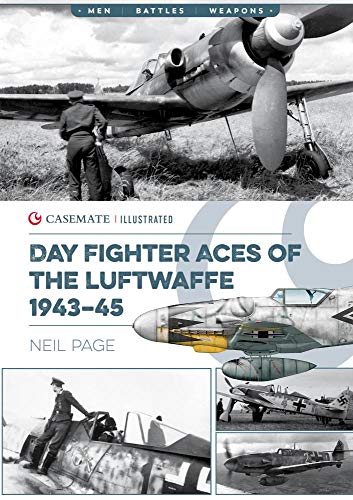 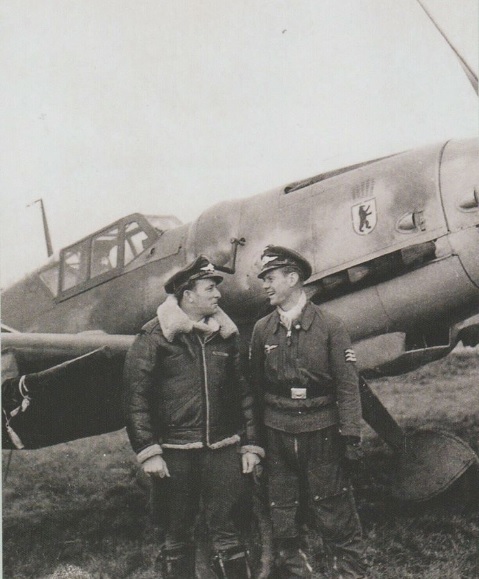 Standing in front of this machine are Ofw. Müller and Fw. Blume. Source: Collection Hans Eberhard Blume via Boiten and Bowman 2001, p. 91. Thanks to Sinisa and Marc for heads-up and caption. Also published in the Prien/Rodeike/Stemmer history of II./ JG 27, page 396. A cheap 'repro' currently on offer here

Perhaps not Keller's machine though, or even the Gkr's as only part of a single chevron is visible. Maj. Werner Schroer was Gkr. II./JG 27 until mid-March 1944 when he left the unit for III./JG 54. He was of course a 100 victory ace and Eichenlaub holder at the time (awarded after his 84th), so his pilots were very likely to want to be photographed in front of his machine - even more so if he was leaving the unit.  See the photo series in Prien II./JG 27 (p424), dated March 3, 1944, depicting Schroer with a celebratory garland marked '100'. However some sources indicate that March 3 was the date Schroer filed his 99th claim and victories 99-102 were not returned until May with III./JG 54. (a P-51 and two B-17s on May 24)

Fritz Keller himself had been away from the front for nearly two years - from April 42 to late Jan 44 - following a so-called Führeranlass after the deaths of his two brothers in Russia. (Prien, II./JG 27 quoting from Keller in 97).  Keller had six victory claims up to April 1942. He volunteered to return to active service and pestered Galland to get back to JG 27. (Prien, p362) He flew his first (training) sortie in II. Gruppe on March 15, 1944. He subsequently claimed a number of Viermots but was shot down on December 17, 1944 and hospitalised for several months before returning to head up II. Gruppe from the ground.

Below; another view in Wiesbaden-Erbenheim of Ofw. Alfred Müller, seen here wearing what may have been a 'liberated' USAF flight jacket and Fw. Hans-Eberhard Blume in front of II./JG 27 G-6 Gustavs 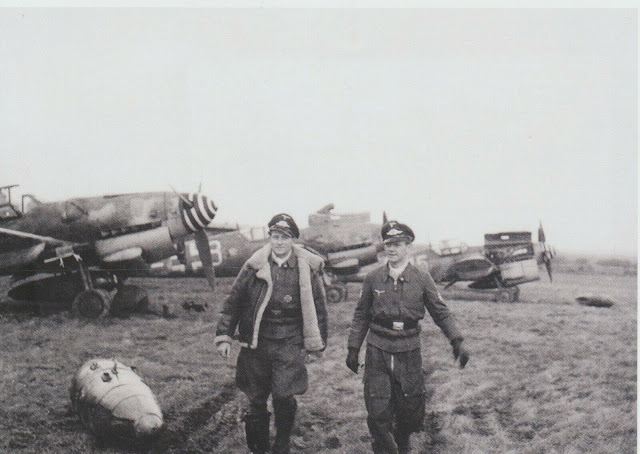 .." some vintage photos may suffer due to quality of originals. Copyright may apply..." says this Ebay seller who has multiple copies (!) of this rather pixelated image for sale here
Posted by FalkeEins at 00:13


The Militärhistorisches Museum Flugplatz Berlin-Gatow have what is billed as a Focke-Wulf Fw 190 A-8/R-2 "Uncoded" on display. "Bismarck" from the Military Aviation history channel has just posted a three-minute walkaround of Gatow's Fw 190 A-8 on youtube which is well worth watching. I've embedded the video at the bottom of this post and it can be viewed here with a single click. 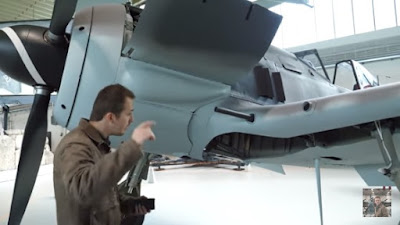 IV./JG 3 operated from Gütersloh late in the war. On December 17, 1944 IV. Gruppe were launched on a ground attack mission in support of the Ardennes Offensive. Lahne was airborne with his Rottenflieger Unteroffizier Werner Talkenberg at 10:50 and the two machines took up a south-westerly heading. Lahne was flying Fw 190 A-8/R2 WNr. 682 060. However he never arrived in the target area. In the vicinity of Cologne (Köln) the Fw 190s ran into a force of P-47s from the 373rd Fighter Group. A wild dogfight developed. Uffz. Talkenberg pursued a P-47 and lost sight of his comrade. He managed to shoot down one American for his first victory, before catching sight of Lahne's "red 5" pursued by Thunderbolts north of Cologne. Shortly afterwards he observed hits on the Fw 190 and saw it burst into flames. It went down vertically - there was no parachute. The Americans reported two Fw 190s shot down in this combat. The pilot who had been able to get clear of his Fw 190 was Lt. Hecker of 15./JG 3. Hecker's Kaczmarek was Uffz. Karl Kapteina and in his account (Prien, p265) Hecker bailed out after his engine started running very roughly. A single P-47 fighter was reported missing by the 373rd FG. An American pilot bailed out in this combat area injured and later succumbed to his injuries. As Talkenberg was attacked again, he did not see Lahne's machine impact the ground and had also moved some distance away from the air combat, so that he could not remember the exact crash site. No German aircraft from the area was reported as having crashed that could match the "red 5". Lt. Rolf Lahne remained missing until road construction work in 2003 in Pulheim north of Cologne turned up his Erkennungsmarke 'dog-tag' and steel helmet along with parts of his Fw 190. Lahne had flown Ju 88s with KG 3 and had been awarded the Frontflugspange (combat clasp) in silver. He had subsequently been posted to ZG 76 and flew the Me 410 the defence of the Reich before retraining on Fw 190s and being posted to JG 3. He had shot down a B-24 bomber on December 2, now he himself had met this fate. One of the many unexplained and missing airmen over the territory of the Reich. 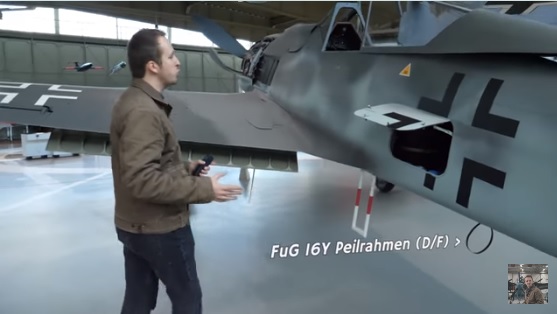 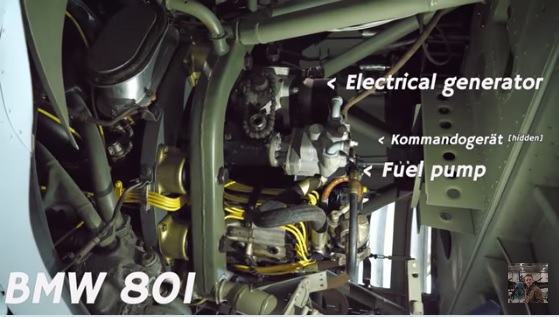 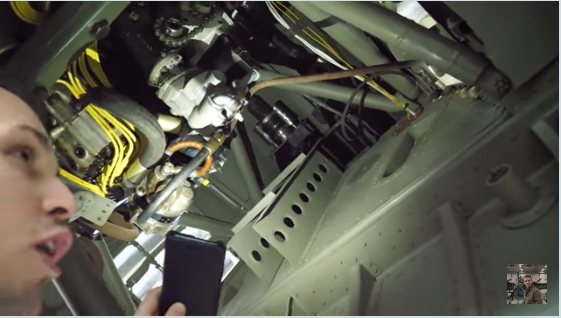 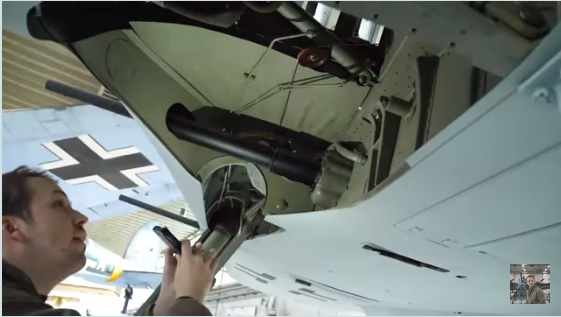 The Kommandeur III./JG 3 in the cockpit of a Stab JG 3 Bf 109 preparing for a sortie during the first few months of 1943. The aircraft is WNr. 14 859, Kennung is "schwarzer Doppelwinkel Strich"- a Gondelwaffen-toting G-4 'gunboat' written off after a crash-landing on April 1, 1943. It is not known if Maj. Ewald was the pilot on this occasion. The Stab, II. and III./JG 3 bore the brunt of the fighting against 8 VA and 17 VA during this period, making some 342 claims for 24 losses. 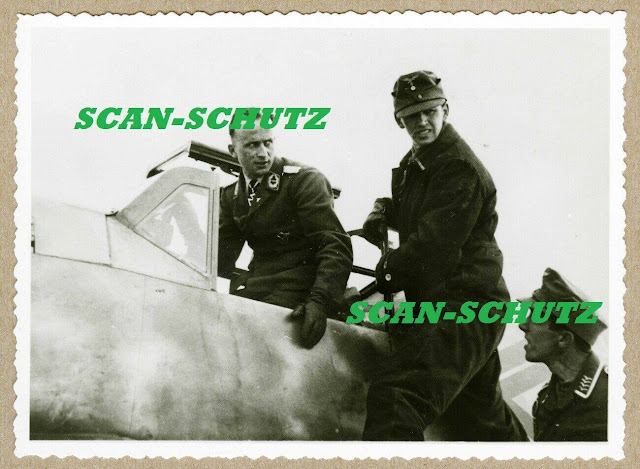