Another area of Luftwaffe colours that seems to have become a real can of worms is the issue of JG 1 Fw 190 checker board cowls. These 'Sonderkennungen' or 'special markings' were among the first attempts to come up with a colour scheme that would facilitate aerial re-formation of  JG 1 fighters after a pass through the bomber Pulks. The first 1./JG1 machines to be painted with this Schachbrettmuster (lit. chess board scheme) were photographed with plain white cowls and from around mid-1943 1. Staffel added black checks to the white cowling. The scheme didn't last long on the aircraft as reported by 1./JG 1 mechanic August Michalski;

" one day our airfield at Deelen was raided by P-47s - their cowlings were also finished in the chequer board scheme. Because of this the airfield flak failed to open up on them - they thought they were our own aircraft- and the P-47s were able to strafe the field entirely unhampered...following this debacle our Fw 190s quickly had their checker cowls over-painted .."

It is therefore difficult to see how these cowl colours could be anything other than black/white - after all why should they be?  Fw 190 Experte (NB 'Experten' is the PLURAL form) Peter Rodeike who covered this subject in an article in German magazine Jet & Prop (issue 4/03) is of the same opinion. In his piece Rodeike quoted ground crew testimony from Michalski (above) and states that " no former JG 1 personnel could recall any colour combination other than white/black as ever being used on JG 1 Focke-Wulfs ". Pretty categoric. He further states that information on yellow and red coloured chequers stem solely from 'interpretations' of archive film images held by certain US 'experts' and authors (if I'm being unkind he could have perhaps added 'with decals and books to sell'). In Rodeike's article one can trace two possible sources of the claims of yellow and red used.

Thomas A. Tullis has on the other hand published an article in "Defenders of the Reich Vol 2", by Erik Mombeeck arguing why 1./JG 1 used yellow/black chequers. He suggests the black checkers/chequers had been painted on an already yellow nosed a/c or even that the "power egg (entire cowl/engine unit) could have been borrowed from a third Staffel aircraft due to engine problems". Both explanations seem quite unrealistic to me and seem only to serve the purpose of defending a preconceived idea. Note though that sister Geschwader JG 11 did have solid yellow cowls on some of their Fw 190s.

There are some stills taken from a film also published in b/w in "Defenders of the Reich Jagdgeschwader 1 Vol 2", by Mombeek. The colour version of the pictures are published in the Jet & Prop article and clearly show some undoubtedly white checkers, while others have a brown/red tone to them. Studying the photographs closely though you can see that areas of the grass and trees in the background are tainted brown, so for me this is pretty unreliable evidence..as you can see from this still shot I've added from the article... 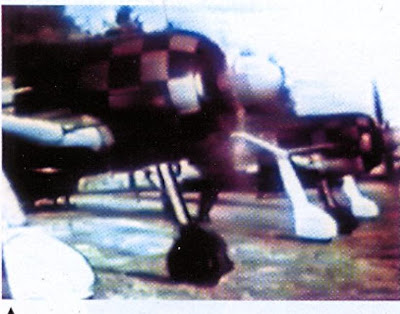 Commentary from Bernhard Kunze's nephew on the JG 1 checker cowl colour issue on this blog
http://falkeeins.blogspot.co.uk/2013/03/one-million-page-views-since-september.html
Posted by FalkeEins at 05:24 3 comments:

He 115 brought down over the UK - Luftwaffe Seaplanes (4) 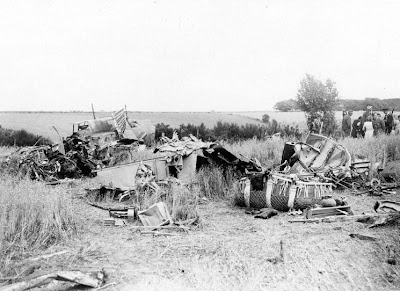 The wreckage of Heinkel He 115C, W.Nr. 3251, coded S4+BH from the 1. or 3./Küstenfliegergruppe 506 (Coastal Flying Group 506). The seaplane was lost during an operational sortie to the east Scottish coast when the pilot, blinded by searchlights, flew the aircraft into high ground on Faldiehill Farm near Arbirlot, Angus at 0404 hrs on the morning of 15 August 1940. The crew were Feldwebel Schroers (killed), Leutnant zur See Hans Tonne (survivor) and Oberfeldwebel Rudy Holfert (killed)

The wreckage was discovered by a farm worker walking to work and although both Ofw.Holfert and Fw.Schroers were dead, Lt.z.S. Tonne was still alive although severely injured . Along with his dead comrades, Tonne was transported to hospital in Arbroath where he died shortly after. All three were subsequently buried at Arbroath East cemetery.

(with thanks to Dave Wadman at britmodeller.com)
Posted by FalkeEins at 05:10 No comments:

Me 262 in the REIMAHG plant

One of the most astounding German armament industry projects of World War II was the construction of a jet fighter manufacturing plant in the heart of the Walpersberg mountains at Kahla, Thuringia, Eastern Germany. The plant was operated by the REIMAHG works or Reichsmarschall Hermann Göring Werke using forced labour in the most harrowing of conditions. Completed airframes were carried by elevator to the top of the mountain where a 900 metre runway had been constructed. Completed Me 262s were ferried off this relatively short strip with the aid of RATO jet packs - there was no second attempt possible! These images were taken by Life photographers following the discovery of the factory by the Allies and are two of the best from Kahla. 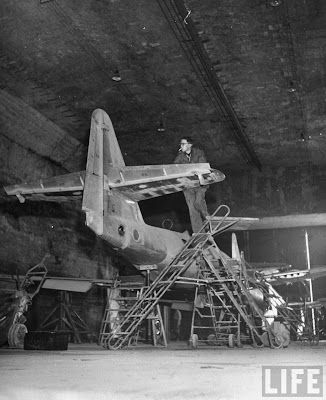 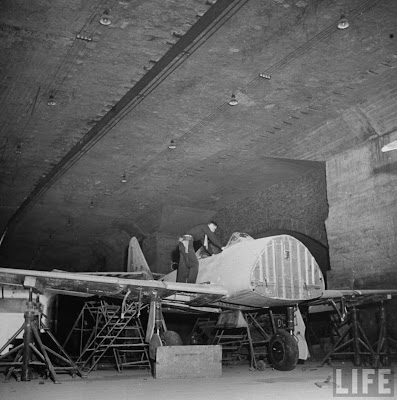 Posted by FalkeEins at 02:38 No comments:

Labels: Defence of the Reich, Luftwaffe rocket and jet fighters, Me 262

French publishers Lela Presse bring out Volume II of their Luftwaffe Seaplanes series on 25 February 2010 - this is likely to be another sumptuous A-4 hardback production of some 350 pages and 600 photos, covering a number of Luftwaffe seaplane types with Werknummern, Stammkennzeichnen and loss listings. The books build into easily the most comprehensive reference works on Luftwaffe seaplanes in any language. In addition to English language photo captions volume II has a number of first-person accounts translated into English from German memoirs by the author of this blog. As an idea of what to expect here are a couple of page views from Vol I covering such types as the Arado Ar 196 (over 120 pages), the Heinkel He 59 and Dornier Do 18. You can order direct from the Lela Presse website at http://www.avions-bateaux.com/. Also stocked by the Aviation Bookshop, Tunbridge Wells, Kent. 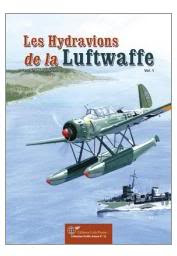 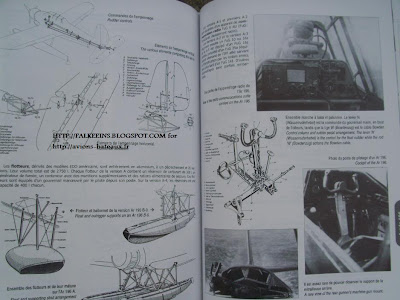 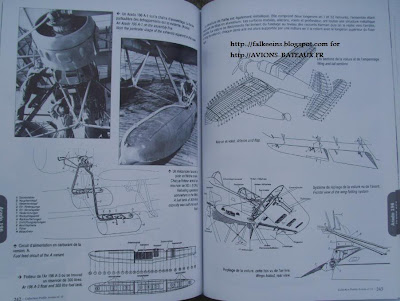 rare view of the rear gunner's position in the Arado Ar 196 taken from a wartime magazine photo feature entitled " Flieger über See " published for Arado during 1940  - see Pages 256-260 of the Lela Presse title. Click on the images for a closer view.. 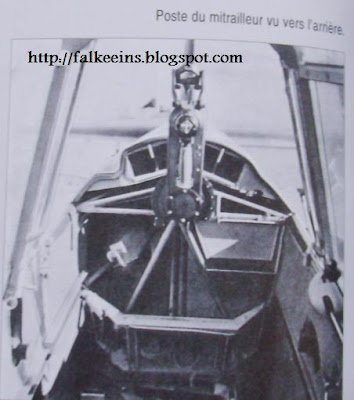 Posted by FalkeEins at 08:26 No comments: 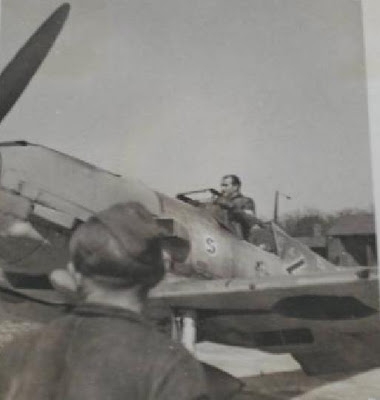 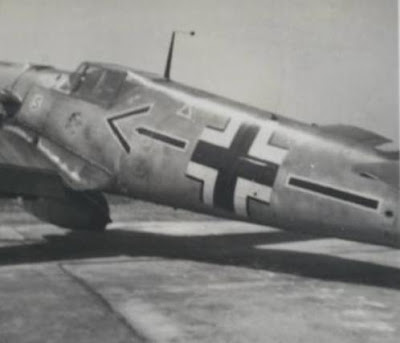 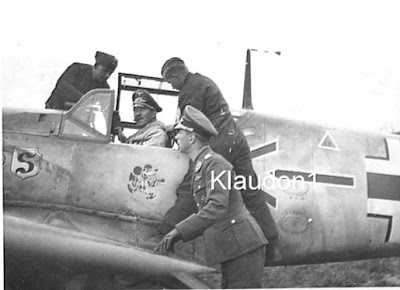 Posted by FalkeEins at 06:58 No comments:


While no fighter units were based at Wünstorf when the airbase was occupied by Allied forces there did exist on the airfield a repair shop (or a scrap yard) maintained by the Leichtmetallwerke Hannover during 1944/45. Therefore a variety of different machines from different units can be found in the associated Allied intelligence report.

The Ju87D with the burnt-out engine compartment was V8+JB of 1./NSG 1. The Savoia-Marchetti 82 in the hangar is probably the machine of TGR. 110 (ital.) that was depicted in a "Jet & Prop Foto Album" (it had a small Italian tricolore flag under the cockpit). JuW34 NG+DN and the Si204D-1 WNr.321492 CW+KX were operated by Fliegerzielstaffel 3 before the unit was disbanded at the end of March 1945. The Siebel had a white 19 painted on the fin, this feature as well as the barely visible emblem are all that remains to indicate its use with FFS B 21 until mid 1944. 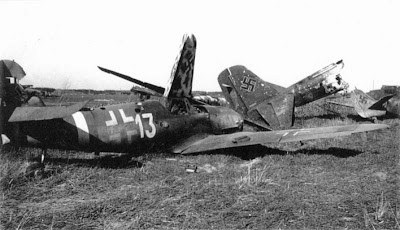