I wonder how many modellers have built Fw 190 models in the garish Schlangenschwarm colours of 3./JGr.10?  These are great schemes - very 'pseudo-glamorous' - if you're into that sort of thing. I even saw one poster on the 'Flypast' forum asking if they were 'authentic'! It occurred to me though that we haven't been well served by our favourite publishers and decal sheet manufacturers with regard to these machines - with the result that my latest model appears to have more errors and omissions than you can count. Of course if you have built a 'Snake' Schwarm 190 then you've probably used EagleCals decal sheet 35 or the Kagero Fw 190 (Vol I) decals - that's right, the ones with the red Staffel numbers!   When Flugzeug Classic magazine published Alexander Steenbeek's article back in 2005/6 (?) Peter Rodeike (IIRC) built a similar looking model that accompanied the feature (see below).  I contacted author Steenbeek with queries about this unit and their aircraft after his feature appeared, but he declined to answer any questions, stating that the pictures had been "reserved" by another publisher. 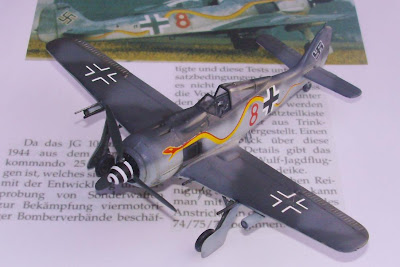 Of course it turned out that the codes worn by 3./JGr.10 machines were black with a thin red outline, as revealed in a recent Luftwaffe im Focus article. Eagle Editions even added a small chapter to their Fw 190 Dora tome (Vol II), reproducing some of those original Flugzeug Classic article photos!  Of course on-going research and new photo discoveries are always liable to modify our knowledge  - but information of the unit's codes first surfaced way back in the late 1990's when the diary/flightlog of Uffz. Günther Pape was first retrieved from the wreck of his crashed aircraft. Is it now too much to expect that EagleCals reissue sheet 35 -still on sale- with the correct markings? I put my old sheet on Ebay a while ago, but still had the same decals ('red 8')  to use from the Kagero monograph on the Fw 190 (Vol I)- Kagero in this instance appearing to have simply 'copied' the Eagle Editions decal sheet. It would of course be fairly straight forward to mask and paint 'black 11'  but that is not the point. Even if Kagero's decal sheet is a free 'extra' with the book, an EagleCals decal sheet costs the best part of 10 quid in the UK.  At least the 'snake' marking will be useful I guess, although I've read reviews that suggest that this isn't always the case  in the larger scales. Incidentally the LiF piece had a nice image of a presumably only partially painted 'yellow' snake - a much better subject to model perhaps than another EagleCals subject, a JG300 machine supposedly decorated with a snake (not to mention some aristic license) and featuring blue/white/blue fuselage bands. However it wasn't until I was taking a picture of my Revell 1/72nd scale model using the Kagero book as a backdrop that I realised that both Kagero and EagleCals were also suggesting that red/black 8 should have its outer wing MGs deleted. I have no idea why  -  the only known photo of red/black 8 doesn't show any evidence of the removal of the outer wing weapons and was taken at the wrong angle to reveal whether or not this would have been the case. The outer wing breech covers are still there, but they presumably were part of the wing structure.  Ordinarily the MG 151s could not be removed without exceptional authorisation as the Sturmgruppen pilots discovered during November 1944 when many of them requested to do so. Perhaps they may well have been removed by an operational 'test' unit although as mentioned elsewhere, the underwing rocket launchers, if not the 'Crab device, were hardly innovations by September 1944. To be fair there is at least one picture of a 3./JGr.10 machine clearly showing the outer wing MGs removed - no Staffel number visible - although the machine in question was equipped with the rearward-firing Krebs rocket launcher.  Also reproduced in both publications mentioned above was a photo of  the young pilot  Uffz. Günther Pape, in front of his Fw 190 'black 6'. The photo clearly shows no ETC 501 carrier under the fuselage - possibly removed for the installation of a rocket launcher? However the published LiF and EE profile artworks (Sundin/Tullis) depict this machine with a standard belly tank. One thing is certain - the rocket-equipped Fw 190s of 3./JGr.10 achieved little or nothing in combat and tactically a belly tank full of fuel would have been far more useful for their pilots. And while these gaudy paint jobs look great on a book cover and probably sell hundreds of decal sheets - accurate or not - spare a thought for their pilots. They were not flamboyant dare-devil aces but young kids barely able to fly their aircraft in loose formation -let alone combat. I find myself wondering whether these garish schemes had a more sinister purpose - designed to 'encourage' or incite fledgling pilots to sacrifice themselves against the bomber fleets. Ultimately they were little more than cannon fodder.... 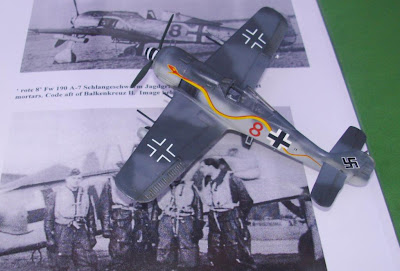