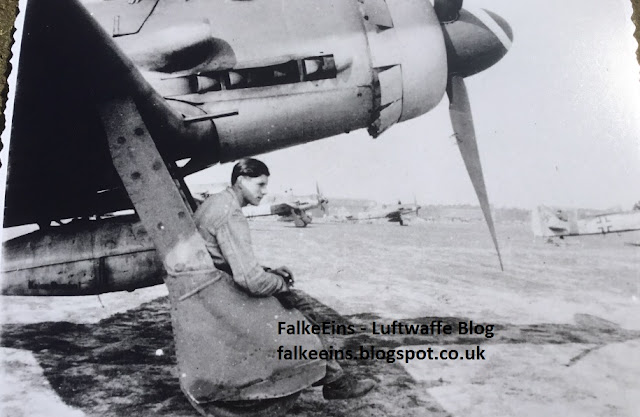 From a photo print in my collection prepared from the original negative by J-Y Lorant. Dora 9s of II./JG 301 pictured at readiness during spring 1945 in Stendal. Note the yellow-red fuselage bands of the machines in the background. A II. Gruppe bar is just visible on the aircraft on the right, which appears to be 'red 3' or possibly 'red 5' of 8. Staffel - click on the image below to see a much larger view.. The auxiliary tank on the aircraft closest to the camera is slung on the refined ETC 504 rack.

On 2 March 1945 the 8th AF launched a full-strength raid against synthetic fuel plants - JGs 300 and 301 both managed to commit all four Gruppen for what would prove to be the last time for a total of  nearly 200 machines airborne. The II./JG 301 Doras suffered devastating losses running into P-51s north of Magdeburg and for just one B-17 claim no fewer than eight II. Gruppe pilots were KIA (Caldwell p423) including Lt. Walter Kropp of 8. Staffel at the controls of  'red 1'..