As a Schlachtflugzeug the Fw 190 brought an increased level of firepower to the Eastern Front, especially the F-8 version which appeared during the spring of 1944. Erprobungskommando 26 under specialist anti-tank pilot Maj. Hubert Eggers had been established at Udetfeld (near Gleiwitz in Upper Silesia) to test suitable armament and quickly set about adapting the German Army's successful  'Panzerschreck' for airborne carriage and launch. Similar to the US 'bazooka' the 'Panzer Granate 4322' was a larger 88 mm calibre hollow-charge anti-tank rocket. Testing with rockets mounted on underwing ETC carriers started in August 1944 and trials against tanks during September took place at distances from 100 metres, the weapon being launched in salvos of six. The rockets were regarded as a big improvement in comparison to the Mk 103-equipped Hs 129 or the Ju 87 Kanonenvogel  with Flak 18. Fw 190 F-8s of 5./ SG 77 under Oblt. Stephan Schmitt were among the first to deploy 'Panzerschreck' in action being fitted out at Udetfeld in late September 1944 and flying their first missions from Sarospatak in Hungary in early October. Attacking Soviet tanks close to the Hungarian–Rumanian border on October 7, the Staffelkapitän was hit by anti-aircraft fire and killed. He was subsequently awarded the Knight’s Cross posthumously on 29 October. Other units understood to have taken delivery of the rocket in late 1944 included III./SG 3 at Frauenberg in Latvia, II./SG 2 and 8./SG 1, with further elements of SG 10 following in 1945. Around 90 Fw 190s had been equipped to launch Panzerschreck by December 1944.

'Panzerblitz' was not a development of the 'Panzerschreck' but a slightly more 'sophisticated' second anti-tank unguided rocket developed from the R4M Orkan air-to-air rocket used by the Messerschmitt Me 262. It was fitted with either an 80 mm (3.1 in)-diameter standard warhead, in Panzerblitz I, or a 210 mm (8.3 in)-diameter hollow charge warhead, in the Panzerblitz II. Special launch or discharge rails were designed for Panzerblitz by Curt Heber of Osterode, the firm also constructing launch racks for the R4M air to air rocket ; the Einzelschussgerät Panzerblitz (EG Pb) were 'single shot' rails which could be combined together in a launch ‘system’, the Abschussschienegerät Pb (AG Pb) of six or eight rails bolted together. Capable of 410 m/s, the higher velocity of the 'Panzerblitz'  enabled tanks to be destroyed at greater ranges of up to 200 m distance with rockets being fired in salvo or in pairs. The only limitation was a maximum speed of 490 km/h, not to be exceeded during missile firing. Up to February 1945 the Luftwaffe received 115 Fw 190 F-8/Pb 1 machines. The Fw190 F-8/Pb2 - Panzerblitz 2 (Pb 2) unit differed in the replacement of the M8 warhead by a hollow-charge warhead able to penetrate up to 180 mm armour. Also developed was the new missile system Panzerblitz 3 (Pb 3) with a 210 mm hollow-charge warhead, but it was not operational by the end of the war.

III./SG 4 was one of the first Gruppen to deploy 'Panzerblitz' in action,  certainly in the West, flying their first operational sorties with the missiles during December 1944, having trained at Udetfeld during November. Extracts from the III./ SG 4 KTB;

III./ SG 4's first operational sortie with eight Panzerblitz-toting Fw 190s ('Beladung Panzerblitz') took place on December 7, 1944...Mission order - attack on road columns in the sector Zabern -Strasbourg -Schledtstatt....both the Kette led by the Kommandeur (south of Strasburg) and the Schwarm led by Oblt. Eissele  (south-west of Hagenau) were met with such intense anti-aircraft fire, that the attacks, carried out at low-level because of the weather, were not effective....six trucks and two anti-aircraft batteries were knocked out.  One total loss due to anti-aircraft fire, two a/c returned to manufacturer, two a/c require three-day and two further a/c one-day interventions in the repair shop. Obfhr. Rüttgers failed to return..

Twelve machines of the Gruppe also took part in the Luftwaffe’s  Bodenplatte New Year’s Day attacks - at least five Fw 190s launched their missiles to report 'successful' sorties.  9. Staffel pilot Fw. Rudolf Fye was shot down by USAAF P‑47s and his Fw 190 F‑8 crashed near to the road that ran between Asch and Mechelen, Allied air and technical intelligence recovering a number of 'live' Panzerblitz rockets.

In the period 21 January–20 February 1945, the Fw 190 F‑8s and F‑9s of III./SG 4 accounted for the destruction of 23 Allied tanks and inflicted serious damage to 11 more, as well as causing the destruction of two armoured vehicles. This tally was achieved over  the course of 115 sorties flown in 16 operational missions in which the Panzerblitz was deployed.

In the East Lt. Irmfried Zipser's III./ SG 1 gave up their Ju 87 Stukas during May 1944 and converted on to the Fw 190 F;
"Since we Stuka pilots had no idea about flying fighters, we also received a short course of fighter instruction, during which we were at least taught how to get out of trouble if necessary..."
Within two months  Zipser's Gruppe was back at the front and had flown their first combat sorties in the Fw 190 from Radzyn. Less than four weeks later, the Red Army launched its major summer offensive, completely destroying the German Heeresgruppe Mitte.
"At first we were deployed in the central section, in the Warsaw area, then we moved north to Insterburg, and finally to Courland and on the Memel. Everywhere it was burning like a torch." 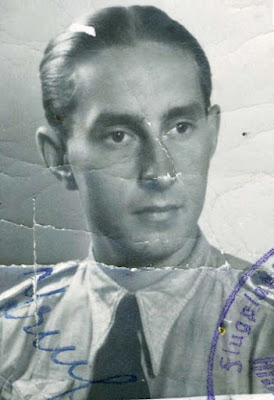 Zipser's Leistungsbuch (performance book) bears witness to the devastating effect of the attacks mounted by the rocket-equipped Fw 190s and to the heavy fighting in which III./SG 1 was involved and gives daily details. Numerous "dive" ('Sturz') and 'Schrägangriffe' "slanting or oblique" attacks, often followed by ‘Schießanflüge’, or “firing approaches" or strafing passes against "deployments, troop concentrations, columns, vehicles of all kinds, artillery and flak positions, convoys and tanks". With often disastrous consequences: "Very good hits! - High enemy losses! - Flak or Ari positions very well covered! Numerous vehicles destroyed! Tanks set on fire, then exploded! Direct hits in ammunition transports! 'Volltreffer in Munitionstransporter! Heavy fires observed!" Zipser remembered;
" ..the 'Panzerblitz' missile was much more effective than the 'Panzerschreck' and with it we achieved considerable success. We carried twelve of them under the wings, six on each side. The firing sequence was programmed in advance in the control box. They could not be fired individually, at least three at a time, but most of the time all twelve were salvoed simultaneously. Such a salvo was then one hundred percent deadly. Even for the most heavily armoured tanks. The first 'Panzerblitz' missions were a shock to the Russians – ‘die ersten Panzerblitz- Einsätze wirkten auf die Russen wie ein Schock’. But within a few days they came to terms with it. We shot up an unbelievable number of tanks, but for what? I hit one tank. And maybe another. But 100 others were behind it, that was our reality. The mass of attackers can't even be imagined. The Russians didn't care about camouflage either any more. They marched and crushed us with their mass. Especially since our losses could no longer be made good, while the Russians had a seemingly inexhaustible arsenal. I saw masses of tanks, rows upon rows, and when those at the front had been shot-up the next in the line would move forward and just drove over the ones that were left behind. I can still see these images in my mind's eye today. Just the battles at the Oderbruch near Berlin claimed tens of thousands of lives in a single day! Just imagine it! Mountains of corpses! In the Oderbruch, too, numerous pontoon bridges were destroyed by "Panzerblitz". Just as quickly as the Germans destroyed them, the Red Army soldiers rebuilt them again.."
Force-landed F-8 displaying a III.Gruppe vertical bar aft of the fuselage cross. The Panzerblitz installation underneath the port wing is visible.

Irmfried Zipser told his story to Peter Cronauer in Flugzeug Classic (2016). A good source for more on German air-to-ground weapons is Robert Forsyth's "Luftwaffe Special Weapons" published by Osprey.
Also on this blog;
Fw 190 with Panzerschreck, rare images of Fw 190s of 5./ SG 77
Posted by FalkeEins at 10:09