" ....I completed my pilot training in Châteauroux, France during the summer of 1943. But following a crash I was hospitalised for a year. I was making a turn in the circuit when I hit two telephone masts running along a road. My aircraft went straight down, chopping through seven trees along the way. Both my wings were torn off and my engine ended up some eighty metres away. I was catapulted out of the cockpit still strapped to my seat and hit the ground in a field. I suffered many fractures. Two Frenchmen carried me to a farm. I woke up with a farm girl lifting my head and giving me sips of brandy.

In the East we lived in tents. Food supplies were always adequate and our aircraft were excellent. The only disaster for us was the meagre supply of fuel. It meant that we could not support our ground troops sufficiently and only took off to counter the opposing bombers. And that was usually with only one Rotte. From sunrise to sunset, one Rotte was on alert, its two pilots being relieved every two hours. During an alert, we had to be in the air within sixty seconds.
On  February 16, 1945, we took off in Schwarm formation to conduct a free hunt over the Dschukste sector. In bad weather we started a low-level fight with twenty-three Il-2s escorted by fighters. My Rottenführer was Oblt Kittel. Shortly before the fight, Kittel's aircraft went off at an angle of 30 to 35 degrees and hit the ground. I suspect he must have been hit fatally by flak.
During my short flying career I made seven belly landings and bailed out twice. On one occasion, during a landing, my aircraft caught fire due to a broken fuel line. I was travelling at 160 km/h and chose to jump. It was a mad decision - more of a reflex action: jump or burn. As luck would have it, I was lucky to escape with a simple leg injury.
When I reflect back I can only say that I was very lucky in my life. In fact, I should never have been a fighter pilot at all. My reaction times were pretty slow and I had difficulties with orientation and my sense of direction. In flying school, I was only passed out with a grade 5. I was known in the unit for rarely being able to locate the airfield. Luckily, whenever I was late back, signal flares would be fired off which would guide me back home......"
Karl Bytomski
Karl Bytomski's Rottenführer Otto Kittel (at head of table) and the men of his Staffel enjoy the traditional, classic 'Kaffee und Kuchen' in the field.. 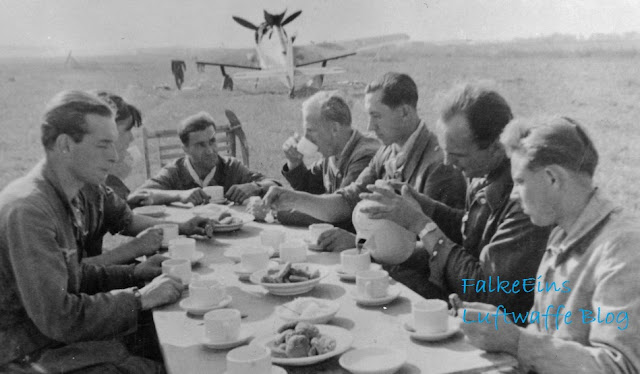 correspondence from Karl Bytomski courtesy J-L Roba/Philippe Saintes. The superb photo-laden two-volume history of JG 54 authored by Philippe is still available from the Lela Presse website in their 'unit history' series. PDF extracts can be downloaded.
also on this blog;
Last flight of the Luftwaffe -  JG 54's evacuation from Courland here
Posted by FalkeEins at 01:39