Part I of a new two-volume work 'The Luftwaffe in Belgium' authored by Jean-Louis Roba and Peter Taghon is currently at the printers and due on September 30 from Lela Presse. Pre-order from the publisher now, free postage on orders up to publication date. (link below)

From the publisher's blurb;

From September 1939 and throughout the 'Phoney War', the airspace of neutral Belgium was criss-crossed by the aircraft of the combatants taking advantage of the weakness of the Belgian Aéronautique Militaire. German reconnaissance aircraft were able to identify future invasion routes and on May 10, 1940, the Wehrmacht invaded. Up to the end of that month,air combats raged in this major strategic aerial battleground. With the withdrawal of the British Expeditionary Force trapped in the Dunkirk/La Panne pocket, aerial engagements became less frequent and the Luftwaffe quickly established itself in the country, rebuilding airfields and military installations.

After the armistice with the French, Belgian skies saw little daylight combat, either during the 'Battle of Britain' or the 'Non-Stop Offensive' in 1941, being 'protected' by the distance from RAF fighter bases. At most, shipping and ports became targets for British aircraft. On the other hand, Belgium was (like the Netherlands) on one of the direct routes used by Bomber Command on their night-time raids on the Ruhr factories. Hence the rapid establishment in the country of night fighter units (Nachtjagd) that were to acquire a name for themselves - such as the 'infamous' 'Ghosts of Saint-Trond', feared by RAF crews.

The period 1939-1942 in Belgian skies was one of contrasts - bloody combat during the offensive in the West followed by a relative calm only disturbed by the growing strength of Bomber Command. The few intrusions of the American 'heavies' in 1942 remained relatively insignificant although they heralded a growing threat.

However, 1943, the key year of the Second World War, was marked by increasing incursions into Belgian airspace by US 8th AF 'Viermots'. On April 6, 1943, the population discovered the murderous power of the 'Flying Fortresses' during the bloody bombing of Mortsel. On that occasion, the local weakness of the Tagjagd (day fighters) was exposed. In spite of regular calls for fighters to be based in the vicinity or temporary transfers of parts of the Jagdeschwader, the German fighters (supported by the Flak) could only with difficulty contain the assaults of the USAAF. During the first quarter of 1944, with US escorts capable of overflying the territory of the Reich, the day fighter defences of the Belgian defensive line all but collapsed and the aerial combats in the Belgian skies turned more often than not into bloody reverses for a still present but numerically dominated Tagjagd.

Go to a pdf extract on the publisher's website here 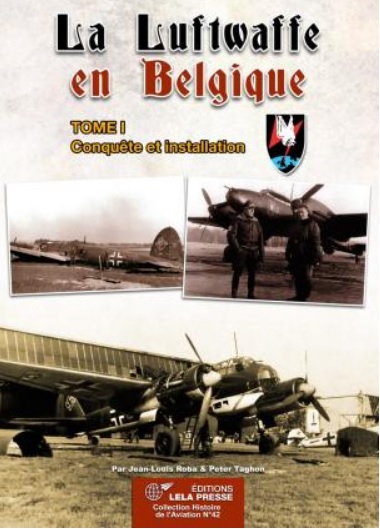