Another 'unknown' ace of JG 2 was Gerhard Querengässer who perhaps typified the 'Nachwuchs' of young pilots facing the Allied onslaught in the West leading up to D-Day. He was born 28 September 1921 in Weissen, a small locality near the town of Rudolstadt in Thuringia and his 80th birthday was marked by Jägerblatt in their issue of 5/2001. Having interrupted higher education to enlist in 1940 he arrived in late 1942 at Beaumont-le-roger via the Ergänzungsgruppe in Mont-de-Marsan. He flew as wingman to Eder, then later to Stratmann and Kabbe when 12. Staffel was re-designated 8.Staffel.

Querengässer twice sustained injuries during 1944. On 23 April 1944 his Gustav collided with the G-6 flown by Oberfähnrich  Gert Pudnowski over Creil (north of Paris) as II. Gruppe was scrambled. With his wing torn off in the collision Querengässer was able to bail out with head injuries while his East Prussian comrade Pudnowski was killed. On 26 June over the Normandy Invasionsfront Querengässer was brought down by German anti-aircraft fire in the vicinity of  Goussainville/Chantilly but pulled off a  gear-up Notlandung. Just a month later he claimed his third victory shooting down an Auster spotter on 26 July in the vicinity of Caen.

With five victories to his credit, Fahnenjunker Feldwebel Querengässer was very much an 'old hare' by the time of the 1945 New Year's Day Bodenplatte raids on Allied airfields. Leading a Schwarm of 8./JG 2 from Nidda in an attack against St. Trond in eastern Belgium Querengässer flew firing passes against P-47s of the 404th FG  being refuelled on the southern side of the airfield but was forced to break off after being chased by Mustangs, escaping at low level.
Fhj.-Fw Gerd Querengässer of III./JG 2 with comrades seen (left) on the wing of his G-6 ‘Kanonenboot’ in late 1944. Pilot seated right is Uffz. Reinhold. 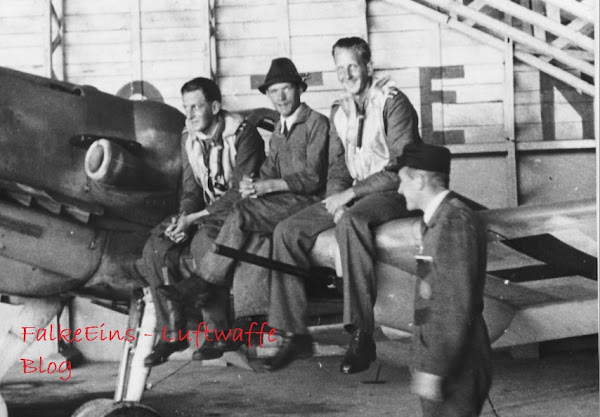 Querengässer survived the war and returned to Rudolstadt 'behind the curtain' in the new post-war DDR.
also on this blog;
More images from the JG 2 archive
More aces and pilots of III./JG 2
Posted by FalkeEins at 12:42