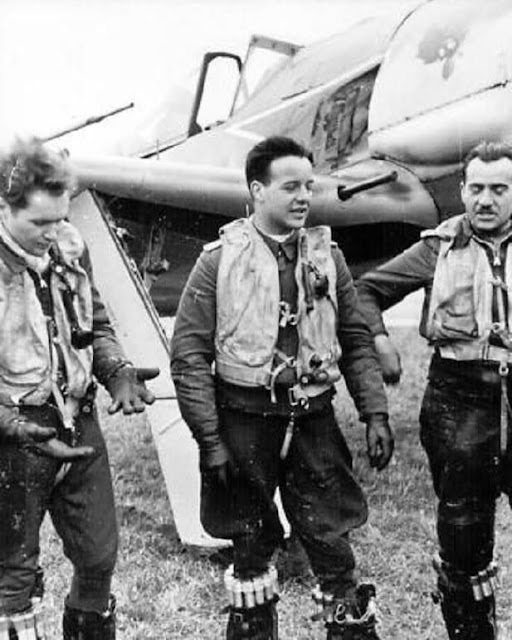 Above; Lt. Benno Eder, Oblt. Ferdinand Müller and Ofw. Fritz Hartmann of 9./JG 2 seen in February 1943 probably at Vannes, north of Nantes in Brittany..Eder would achieve his 5th victory on 30 July 1943 claiming a B-17 from an 8th AF force en route to Kassel. Hartmann was already an ace - his regular aircraft were marked "gelbe 11", one of which was photographed below during 1942. This A-2/3 (probably WNr. 2187) features the stylised eagle wing with an Adlerkopf (eagle's head) marking on the cowling which would be later over-painted and replaced with the cockerel. The rudder featured a row of at least eight Abschussbalken .. 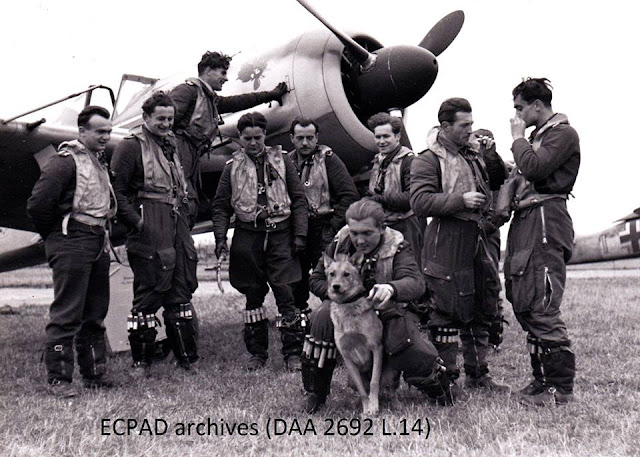 Above; Müller and Hartman (alongside the engine cowl) seen with their comrades in 9./JG 2 are  assembling by their aircraft for a transfer to Calais/Marck on the Channel coast in February 1943 where they were subordinated to the Stab JG 26 following the move of I./JG 26 to the Eastern Front. An Austrian, Müller was appointed Staffelkapitän 1./JG 2 in May 1943. Attacking B-17s raiding Le Bourget just north of Paris on 16 August 1943, he would be shot down and killed by the P-47 escort. Perched on the wheel (leaning against the cowl) is Fw. Willi Kopp who claimed a B-17 shot down south of Jersey on the afternoon of 29 May 1943 for his second victory. His 5th  -also a B-17- was returned on 3 September. He was shot down and killed over northern France on 9 September 1943 in Fw 190 A-6 WNr. 550548 attacking B-17s. Playing with the dog is Rudolf Gehrhardt also seen below on his 'yellow 6'.

Below;  posted on FB by Christophe Blanluet -where I was able to provide the pilot identification. This is Rudolf Gehrhardt of 9./JG 2 on his A-5 (157319) 'yellow 6'. Gehrhardt was seriously injured in a crash landing on 17 May 1943 at Vannes after a sortie against B-17s and probably for this reason alone managed to survive the war, one of the few 9./JG 2 pilots to do so.. 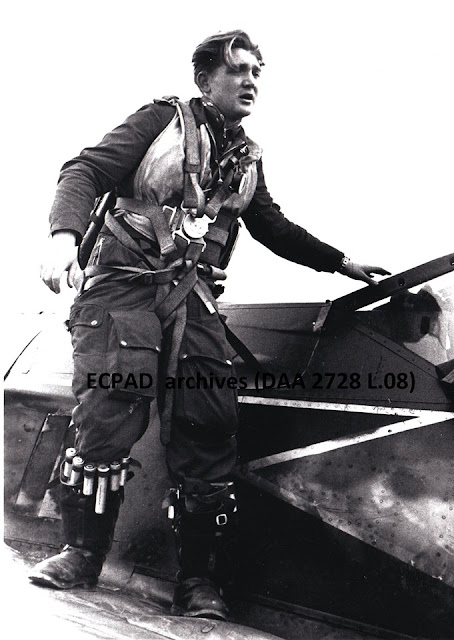 I am grateful to Erik Mombeeck for assistance in compiling these captions. The fact that so few of these men survived indicates how difficult it must have been for Erik to research his multi-volume history of this Geschwader. The latest tome in the series covers 1944 and the increasingly ferocious large-scale combats against USAF B-17s over France as the defenders were overwhelmed ahead of the Allied Normandy D-Day landings..

More on this blog here 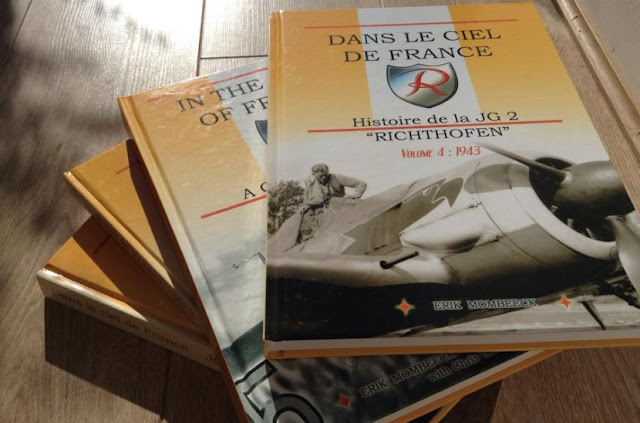