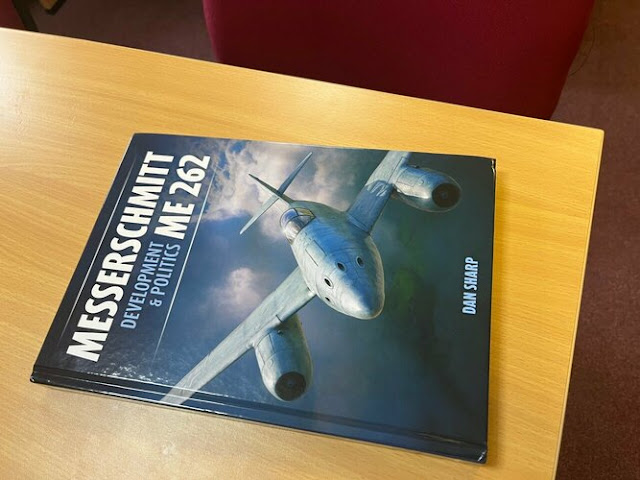 Available now from UK publisher Mortons is this significant new work on the Me 262 by Dan Sharp. This is not the previously announced "Secret Projects of the Luftwaffe Vol. 3: Messerschmitt Me 262" which was planned to focus squarely on the 'secret projects' and sub-variants of the type.  Nor is it a book about combat ops or even a book where every page looks familiar because the reader has already seen the images a dozen times elsewhere. In fact, this is really a book for people who've read the Me 262 story elsewhere - probably different, conflicting versions of that story - and wondered which was the definitive version. As Dan points out, up to this point there probably hasn't been a 'definitive' version. So the small-ish and small format soft-back of the 'Secret Projects..' series has become a new and much larger work as the author explained;

" ..the further I went into the primary source material the more apparent it became that the truth about what happened to the Me 262 throughout its development diverged somewhat from all existing written accounts. As a result, I expanded the book to encompass all aspects of the aircraft's development - the projects, the sub-variants, the prototypes and the full production variants - as well as the discussions that went on about them. The book went from 30,000 words to 160,000 words, from 248x185mm to 297x210mm, from 150 images to 300, and from 150 pages to 328. The original title and cover art no longer reflected the book's contents and as such I persuaded the publisher to change both. This has indeed created some confusion, for which I am sorry, but I believe that the book as it stands now is a great deal better than it would have been in its original form...".

There is very little about combat operations in Dan's new book. The content is focused on exactly what it says in the title -  'Messerschmitt Me 262 Development and Politics'. As usual with his books, the text is grounded in cited primary source documents throughout.  As the author explains, older references about units operating the Me 262 etc. are still as valid as ever they were but all previous references concerning the type's developmental history are somewhat out-of-date.

" if I make a point about something in the book you can see what evidence there is underpinning it, should you wish to. Taking surviving German wartime documents as a whole, a very significant proportion of them - I would hazard a guess at something like 10% - either concern the Me 262 directly or contain information which informs the Me 262's story. This amounts to literally thousands of documents and I have, consequently, collected and processed most of these, distilling the information they contain into the book.."
Many of the images in the book are drawings from Messerschmitt reports - and many of them are, I believe, previously unpublished. Some have appeared in 'cleaned up' form in the works of, for example, Smith and Creek, but anyone who has read any of Dan's previous works will know that you get the original drawing - as scruffy as it might be. The images, like the text, are presented in chronological order - with any given image on the page having been produced at around the same time as the events being described in the text on that page. Where relevant, the author has noted where those images actually come from too - so for example the famous side view of the Me 262 V1, as well as detail shots of the same aircraft, all appear together in a single original report, the written content of which Willy Messerschmitt personally described as 'nonsensical'. Author Sharp again;
" ..I hope to provide additional context and richness to the Me 262 development story where previous works have simply used those photos and others without offering any insight on their background and origin. I read other people's books as widely as possible both before and during the writing process, so I'm well aware of what has previously been written about the Me 262; I was able to test assertions made in those books against the primary sources to see whether they had any validity..."

So to repeat, there are, for example, no biographies of the key players involved in the Me 262 story, no technical explanations of how a turbojet works, no lengthy back-story about the Messerschmitt company and its founding etc. The author's 160,000 words are concerned exclusively with the design, development, discussion and decision-making - with a side order of production. Dan Sharp again;

" my principal aim with this book was to find out what actually happened to the Me 262 all the way through from 1938 to 1945 by using the historical sources rather than whatever appears in other people's books. What emerges, I think, is a rather more complex and nuanced story than anyone, including me, would have expected..."
Also on this blog;
Dan Sharp - Heinkel He 162 -'Secret Projects of The Luftwaffe'
Morton's editor and author Dan Sharp on his new " Secret Projects of the Luftwaffe -Jet Fighters "
Posted by FalkeEins at 11:40