Willy Messerschmitt, Stellungsnahme zum Projekt ‘Volksjäger’ - was the He 162 vs. the Me 262 a bad idea ? Production and engines compared.

In late 1944 Willy Messerschmitt issued a statement from Oberammergau that argued against the development and production of the planned Heinkel He 162 'Volksjäger'. The two companies, Heinkel and Messerschmitt were commercial rivals, although the war situation had gone far beyond that point. In his latest video Kris from the 'Military Aviation History' channel on youtube (see link below) looks at Messerschmitt's warnings that the development of a 'cheap', 'mass-produced' and untested 'disposable' new jet at this late stage of the war would disrupt existing types - while competing for the allocation of scarce resources - even though - as a recent publication argues - a cheap, easy to construct single-engine jet fighter was exactly what the German war effort required.  It is doubtful though whether Messerschmitt could have anticipated such rapid development of the single-jet Heinkel fighter that first flew on 6 December 1944. 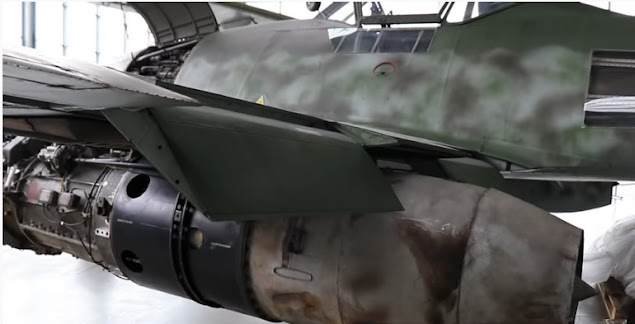 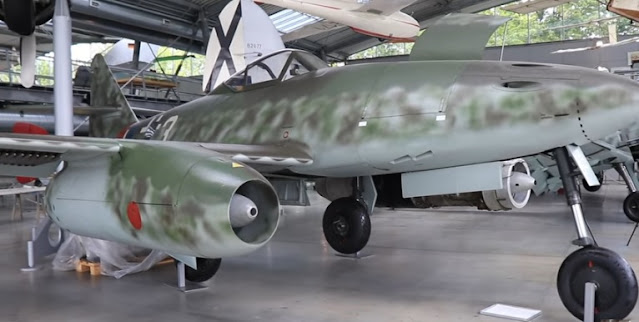 The video compares the two machines from a production standpoint.  Why was it that of a total of 1,433 Me 262 airframes constructed, only 358 machines became operational, given that Allied air attacks accounted for the loss of only roughly one third of these. In other words only one quarter to one third of total Me 262 output was of any benefit to the German war effort - and produced at tremendous cost. This was despite the widespread introduction of slave and concentration camp labour in the type's production. The main advantage of the He 162 lay in its comparatively low production costs - 1,500 man hours per machine as opposed to the 9,000 man hours required to build each Me 262 at a unit cost of 150,000 Reichsmark, twice that of the He 162. Despite these advantages - and as predicted by Messerschmitt - the new type  inevitably encountered developmental difficulties, so that by the end of the war only around 275 He 162s had been constructed with another 800 nearing completion or under production. However, a large proportion of these never received engines. The video looks at the two jet engines and their construction. The Jumo 004 in the Me 262 and the BMW 003 in the He 162 both required considerably fewer man-hours to build that the Jumo 213, DB 603 and BMW 801 piston engines in service and " were less resource-intensive.." In a six month period the single Nordwerk plant produced - underground - some 1,955 Jumo 004 jet engines from a total Jumo production run of between 4-6,000 depending on the sources.  These were required for the both the Me 262 and Ar 234 types. BMW produced only some 560 jet engines during the war, despite the BMW 003 being even less resource intensive than the Jumo engine (no more than 0.6 kg of nickel per unit) and construction being broken down into easily made and assembled components. Being cheaper it was ideal for the He 162. The main reason for production delays were the modifications required to adapt the engine for installation above -rather than under - the wing on the He 162.
But did the He 162 have the impact on Me 262 production  that Messerschmitt claimed it would have ?  On paper, production capacity had become available with the abandonment of bomber types and even piston-engined fighter production was restricted to only a handful of types from 1945..
A single click to view here..
Posted by FalkeEins at 03:33