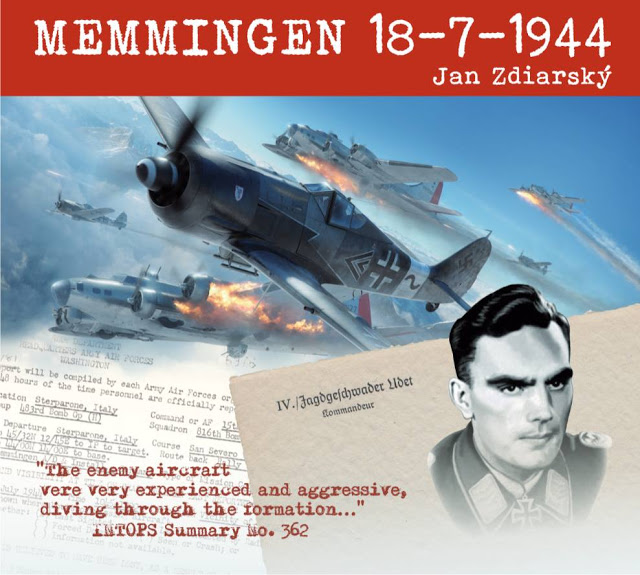 Published in the latest issue of Eduard's Info pdf magazine (no. 83) is Jan Zdiarsky's thorough account of the Memmingen air battle of 18 July 1944 which introduces Eduard's new Fw 190 A-8/R2 Profipack kit. The box-art is striking to say the least. Meticulously researched it is based on the facts as presented by Jan. The artist is in this case Piotr Forkasziewicz.

from the 483rd BG unit citation;

"..As part of the strategic effort of the 15th Air Force against industrial and counter air targets in south-western Germany, a force of 167 B-17s of the 5th Wing was dispatched on 18 July 1944 to attack and destroy the Memmingen airdrome and installations at Memmingen, Germany. The importance of this target is emphasized by its description in the Intelligence Annex to the Operations Order, "Memmingen Airdrome activity has increased, with recent cover showing 70 to 73 ME-110's and 410's not too well dispersed. The installations are used for repair and assembly. This makes this airdrome one of the highest priority counter-air targets.."

At that stage the Americans were almost certainly unaware that following the Oschersleben air battle of 7 July the Sturmjäger of IV./JG 3 had moved to a new and larger field just south of Munich equipped with a concrete runway coincidentally home to the Zerstörer training Gruppe I./ZG 101 - Memmingen!

Due to adverse weather encountered en route the US bombers found themselves devoid of fighter cover. In the absence of a properly authenticated recall signal, the 483rd BG decided to attack the primary target as ordered and continued on alone and unescorted over the northern edge of Italy, over Austria and into the target area in south-west Germany. Kommodore JG 300 Walther Dahl recalled events in his sometimes exaggerated memoir  "Rammjäger "..

"....I have been feeling unwell for several days. The flight surgeon reckons I’ve got a touch of angina and has confined me to my bed. I’m off the flight roster of course. It is a beautiful bright morning....my Ia comes in to tell me a call has come in from Division. A force of about one hundred bombers with strong fighter escort is headed towards Munich. Such a relatively small force heading towards a large city like Munich is unusual and it is difficult to track the exact course of the bombers with radar given the proximity of the Alps. Our Einsatzleiter (Mission Co-ordinator) Hptm Kraus has put the pilots on readiness. The first sightings come in from the ground observation post at Kempten. The bombers target must be Memmingen! My gut feeling was right! The bombers will arrive over the field in minutes !..."

Some 45 Fw 190 A-8/R2 Sturmböcke of IV.(Sturm)/JG 3 led by Hptm Wilhelm Moritz were scrambled. The Sturmgruppe climbed to meet the bombers now flying over Innsbruck in a north westerly direction. As they manoeuvred into their attack formation taking up station in line abreast individual Staffelführer selected their targets behind the bombers and calmly ordered their pilots to hold their fire until they had approached to close range....


For a full account of what happened on 18 July 1944, read Jan's article - certainly one of the most complete accounts of this battle. Free download at this link
https://www.eduard.com/store/out/media/InfoEduard/archive/2017/info-eduard-2017-05EN.pdf


Also on this blog;