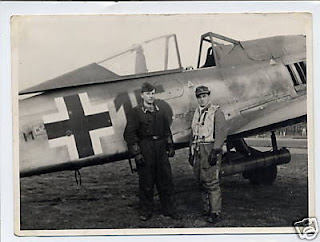 Pilot and mechanic in front of 'black 15' of 3./JGr10 fitted with the 'Crab' device. Note the unit code 'IL'  aft of the Balkenkreuz. 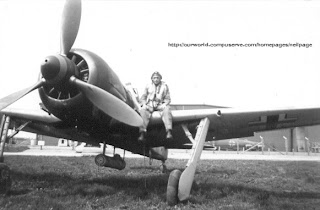 The Chris Stopsack article in  " Luftwaffe im Focus 16 " was an excellent acount of the activities of a little known unit and I was sorry to see that part II of his feature was not included in LiF 17. 3./JGr10 was an operational trials Staffel involved in the testing of heavy weapons against the bomber Pulks and flew alongside II./(Sturm) JG300 from Erfurt-Bindersleben during September 1944 equipped with the rearward facing (or firing) WGr. 21 rocket launcher dubbed the Krebsgerät or 'crab device' which was mounted under the fuselage centre section. Losses were severe - as indeed they were for II.(Sturm)/JG300 that month. However this wasn't the first occasion that II./JG300 had been in action alongside Krebs machines as Stopsack seems to suggest in his piece. Some five months prior to 3./JGr10's operational deployment back in May 1944 12. Staffel of IV.(Sturm)/JG3 had already flown Krebs-equipped Fw 190s (see Willi Unger photo above) and Ernst Schröder reports that he regularly saw their black-cowled  Krebs 190s then.  That trials with the weapon continued well into the autumn of 1944 points to the increasing desperation evident in the Reichs air defence hierarchy. Krebs pilots were little more than cannon fodder. Schröder is scathing about the usefulness or otherwise of the weapon  - the Krebsgerät he writes was " a completely senseless notion. A fighter pilot could neither see nor aim to the rear. Of course its additional weight impacted heavily on the manouevrability of the lumbering Sturmbock Fw 190. Tactically a drop tank of fuel would have been a far better idea !"
Posted by FalkeEins at 13:20