The crew of the Staffelkapitän of 7./KG 30,  Oblt. Helmut Weinreich, assemble for a commemorative photo series following Weinreich's RK award presentation  (with RK), in front of a KG 30 Ju 88 A-4, possibly the machine flown by the Kommodore "4D+AA" in early 1943. Weinreich flew many sorties against Crete, Malta, Tobruk and Tunisia where this photo sequence was apparently shot according to the BA listing. More likely is Comiso, Sicily. 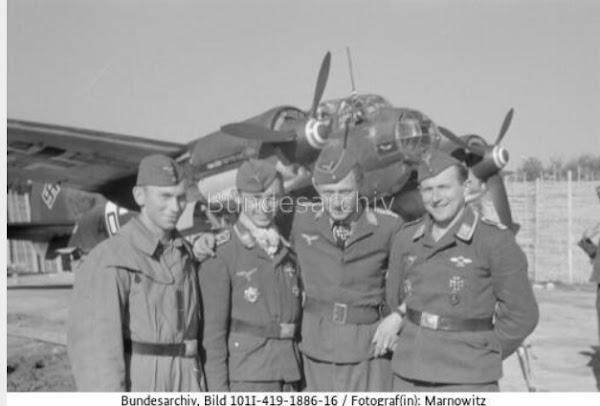 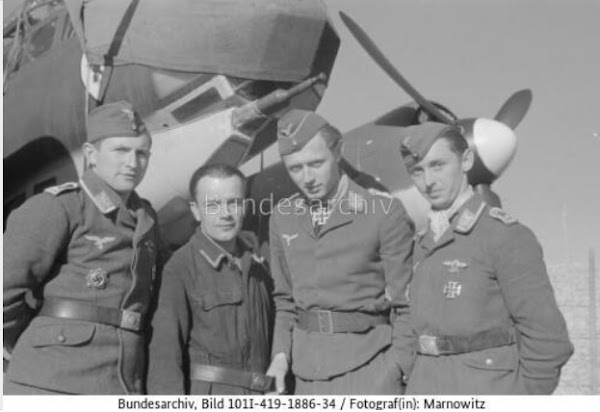 Above, seen from the left, Bordfunker (radio operator) Johann Grünsteudel, presumably the 1st Wart, Oblt. Weinreich and Fw. Andres? Note the canopy covered with a tarpaulin under which the unit emblem is partially visible. The barrel of the MG/FF 20 mm protrudes from the front of the bola, this weapon had proved its worth in combating shipping targets.
Following the award of the Knight's Cross on 22 January, 1943, Weinreich was appointed Kommandeur of I./KG 30 - with the rank of Hptm - based in the Far North at the beginning of February 1943 until August 1943. The main task of the Gruppe was anti-shipping against the Allied Murmansk convoys. Apparently due to take up a staff function, he then volunteered for the single-engine night fighter "Wilde Sau" and on 1 October 1943, with simultaneous promotion to Major, became Kommodore of JG 301, then being established. On 18 November 1943 he was able to shoot down a Viermot bomber over Mannheim, but took hits from defensive fire in his FW 190 A-5 WNr.151482. Attempting an emergency landing in Frankfurt am Main, his aircraft crashed and exploded, killing him. Posthumously he was promoted to Obstlt. He had taken his long-time radio operator Johann Grünsteudel with him to JG 301, where Grünsteudel remained until the end of the war.
This Bundesarchiv photo report depicted Weinreich's RK award. Thanks to Michael Meyer for caption assistance. Michael's latest book compiled in collaboration with Paul Stipdonk entitled "German fighters in the West " is published by JaPo this month. 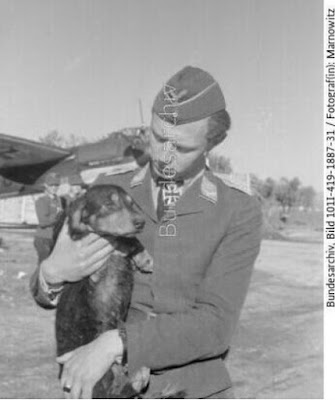 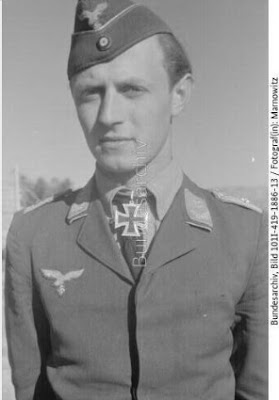 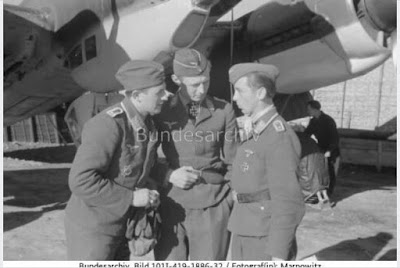