I recently posted a quick over-view of a very nice hardback published by Mortons - ‘Secret Projects of the Luftwaffe - Jet Fighters 39-45' which rather failed to do justice to what is a very nice and impressive publication. As the blurb puts it, author and researcher Dan Sharp has written ' the most complete and detailed account [..]..of German WWII jet fighter development' ever compiled. In comparison my review came across as a little lacklustre no doubt. I spoke to Dan subsequently to discuss his new work. With Dan's permission  here are some of his insights into German jet fighter development. His 'five-star' book is recommended reading for all Luftwaffe enthusiasts. 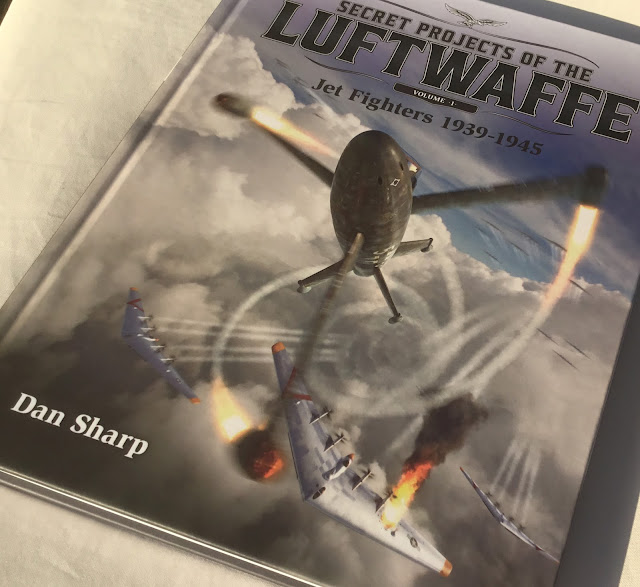 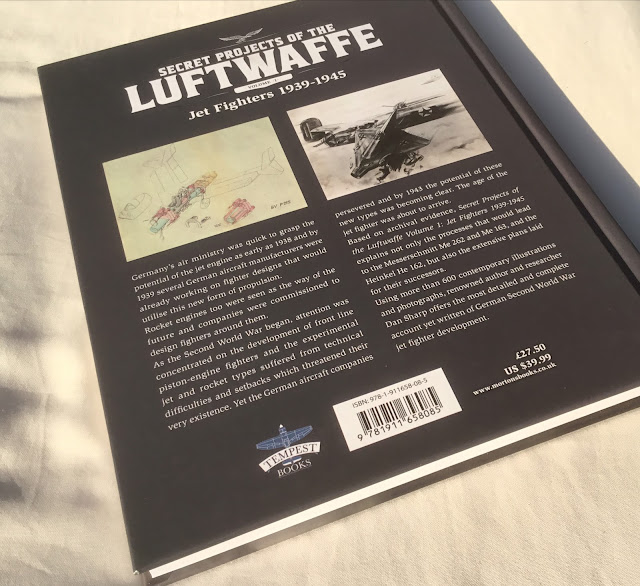 ".. Hello Neil! I saw your review of my Secret Projects of the Luftwaffe Vol. 1: Jet Fighters 1939-1945 and was glad that you were sufficiently interested in the book to review it. I wouldn't normally respond to a review in this fashion but I really wanted to clarify one or two points you raised.."
"...You said in your review that you thought this was a 're-published' title. It is in fact a totally new work. A vast amount of effort in researching primary source documents went into it and it is, I believe, the most comprehensive account of jet airframe development programmes in WW2 Germany ever written. The cover artwork did appear on a 'bookazine' which sold out of its very limited print run five years ago. While my book does of course describe some of the better known jet projects that were under development it goes much further. In fact I'd say I've included every single known jet design ever worked on in Germany during WW2 (and several that were unknown prior to the publication of this book). Each one is set in context, the dates given are backed up by period sources, the details of every known jet fighter requirement, specification and design competition are given. This is something no previous book has ever done..."
"...You said that some designs featured are based on only the sketchiest detail or the odd drawing. This is true and I point this out clearly and indicate the archival sources for every design where they exist, complete with full references. Again, this is something no previous book on German WW2 aircraft development has ever done before. Using my book, anyone could go to, say, NASM, or IWM, and see the original source material for themselves. Previously it was impossible to say whether a cited source was genuine or not. And if it was genuine, to check whether the author's translation/interpretation was accurate. I can tell you that certain sources cited (without giving a location for the document) by certain other authors have been misleadingly interpreted and embellished to say the least. I can provide concrete examples of this..."

"..The section on the Me 163's early development supersedes that written in Ransom's Me 163 Volume 1 and indeed I'm currently helping him to update his book for a reprint, based on the new archival information that I have recovered..."

"..Similarly, my fully referenced account of the single jet fighter competition(s) supersedes those of both Forsyth and Koos, since I found all the original material they had based their versions on plus a great deal more, which altered the timeline and enabled me to provide a more accurate account of what happened and when. I believe also that I have added previously unknown details to the development history of the Me 262 as well..."
"...One of the problems with writing about 'secret projects' (in fact every aircraft ever made started out as a 'secret project' - the term should really be 'early aircraft development') is that the reality is actually rather mundane. There's really nothing 'Wunderwaffen' about any of it. The Germans were methodical in calculating the likely performance of their aircraft designs and the competitive process was fairly rigorous. Outlandish designs were usually proposed for a good reason and rejected for equally good reasons. There's very little in the way of big personalities backstabbing one another, bribery and corruption or Nazi propaganda distorting the procurement process or any of that stuff. It's simply the case that this was, for better or worse, a golden age for aeronautical science, with lots of new ideas (backed up by wind tunnel testing and hard maths) coming through which, it was believed, might provide an edge against likely future enemy aircraft developments..."

"..Taking into account the above I do feel your review of my book is selling it short somewhat. Of course I realise that wartime aircraft development is not your primary area of interest.  That said if anyone feels  that I have the wrong end of the stick anywhere, or if there is any area where I have clearly 'dropped a star' I would be happy to accept and acknowledge it. I would much rather know about any possible misinterpretations so that I can amend them when the opportunity arises. I know some authors will deny anything is ever wrong with their work and will defend demonstrably flawed histories to the bitter end - but I'm not that way inclined. There's always more to discover and more to learn and if you think someone else has done any of it better than me, please tell me!.."
"..I have tried to get this across in my book, with maximum use of contemporary documents to dispel any suggestion of inaccuracy or fantasy (again, certain authors in this field do not seem to be above simply making things up). If anyone can demonstrate that anything is wrong with my account - I would love to know about it so I can better understand what really happened!.."

"..Incidentally, I note from your blog that you are still reading Ron Ferguson's "He 219 An Illustrated History".. You may be aware that, in parallel, Rich Carrick and a team of authors have been working on another He 219 book which will follow Martin Pegg's revised Hs 129 book and the Forsyth/Creek Ar 234 book under the Chandos banner. .."
"..Documents on the aircraft types featured in my book are relatively few and far between, so during the course of my research I happened to scoop up vast quantities of irrelevant material to find bits and pieces on 'projects'. As part of this process, I've dredged up most of the same documents Ron Ferguson has used to build his book - and a whole lot more. I have located some 62 period documents on the He 219 (accounts of meetings on it, test centre reports, comparisons with competing designs, reports on engines for it, armament for it, proposed developments of it etc. etc.). Through the use of these documents, some of the questions Ron Ferguson leaves unanswered in his book can in fact be answered - such as the precise date of its cancellation - and some blanks can be filled in, as well as providing the colour of verbatim accounts of meetings on the He 219..."
"..My point is that even if something doesn't seem immediately relevant to the aircraft developments I might be writing about at the time, I aim to collect and absorb absolutely everything to do with every aspect of German WW2 aircraft development. It is the only way, I believe, to get a complete picture of what was happening!.."

"..I have also been helping Francis L. Marshall with updates for his Bf 109 T book - such as providing the original specification for a carrier fighter from 1935 (making the overall development programme several years longer than originally thought).It's amazing how much is still out there to be found and how uncovering this material about 'projects' can literally rewrite the history of famous in-service types!.."
With excellent production values  "Secret Projects of the Luftwaffe  -Jet Fighters " is  a large book of over 300 pages and some 600 photos, drawings, diagrams and conference translation transcripts printed on glossy paper which describes the convoluted genesis of the jets and jet projects that were under development or attained operational status during the period 39-45. To quote another reviewer writing on Twitter, " ..a fascinating analysis of original German sources that haven‘t been tapped before, doing away with old myths and providing new insights. Highly recommended! .."
Posted by FalkeEins at 20:39