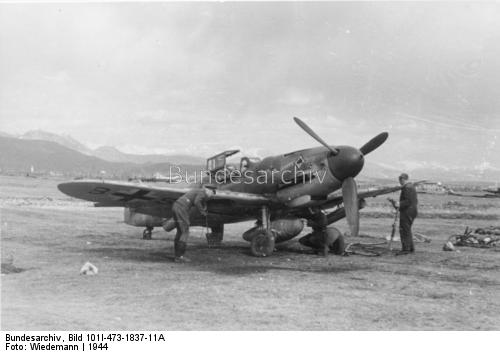 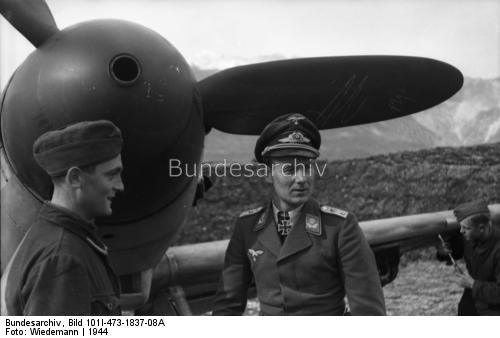 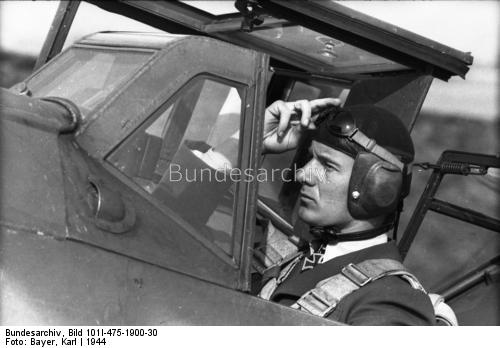 In 2006 REVI magazine published a feature in three parts devoted to Kommandeur Jürgen Harder of I./ JG 53. Part 1 is posted here on The Luftwaffe Blog courtesy of Jan Bobek. REVI is the leading Czech aviation magazine. The Harder article and some superb artworks courtesy of Anders Hjortsberg featured over issues 62, 63 and 64. Click to view large. 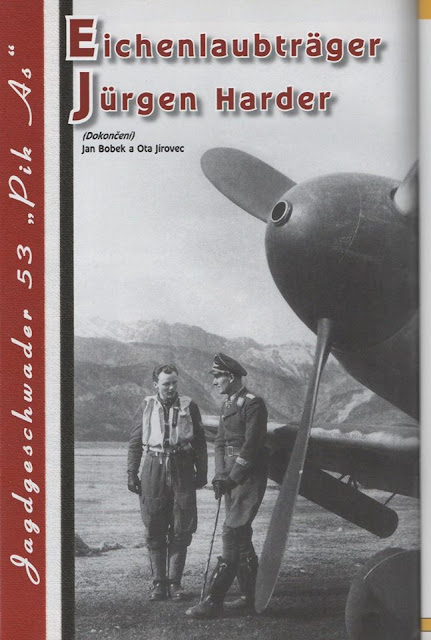 Original caption from REVI 64 article: " Gruppenkommandeur Harder poses with somewhat constrained Oblt. Erich Thomas (above left) in front of one of his 2./JG 53 Bf 109s parked at Maniago, Italy in early 1944. This Staffel was the only unit of Harder´s Gruppe equipped with 21 cm rockets. Thomas was in command of 2. Staffel from February 1944 until the unit´s disbandment in April 1945. He scored his final (15th) victory in May 1944 when he shot down a four-engined bomber. Afterwards, in flights against VVS, his score remained unchanged. In final days of war he served with II./JG 52. 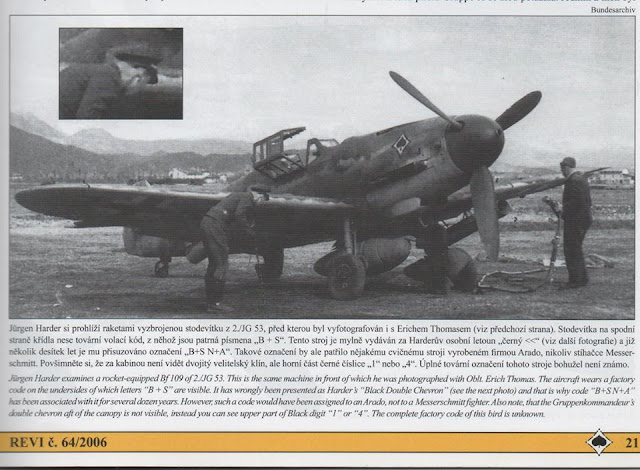 The Bundesarchiv photo series depicts two aircraft at Maniago, Italy photographed on the same day in two different parts of the airbase. There are two photo series, one by photographer Wiedemann and another one done a little later by photographer Bayer. Of the two aircraft depicted, one is a ship belonging to 2./JG 53 equipped with W.Gr. 21, commanded by Oblt. Erich Thomas. In the image above Gkr Harder is pictured inspecting Thomas' machine - the rocket equipped Bf 109. The rocket equipped machine carries the Stammkennzeichen marking BS+... The often quoted BS+NA code should belong to a Arado trainer, not to a Bf 109 G-6. The second ship, below, is Harder´s Kanonenboot "chevron triangle" equipped with MG 151s. The Stammkenzeichen marking is not clear, visible is only +WA, often mistakenly described as +NA, due tothe fact that  the 'W' is partly obscured by the MG 151 gondola 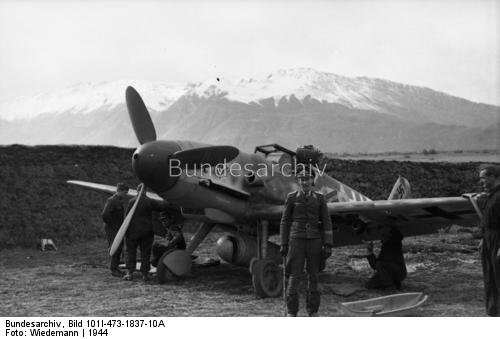 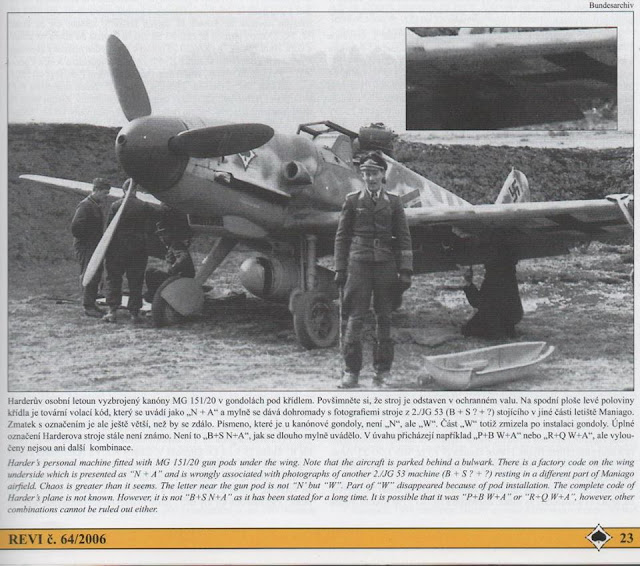 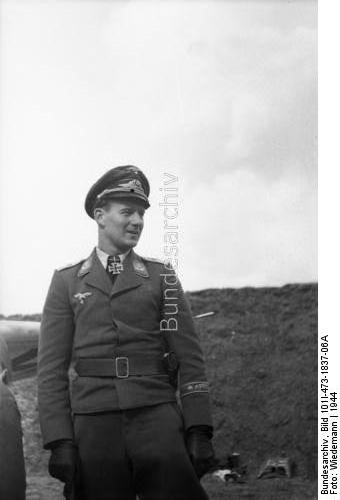 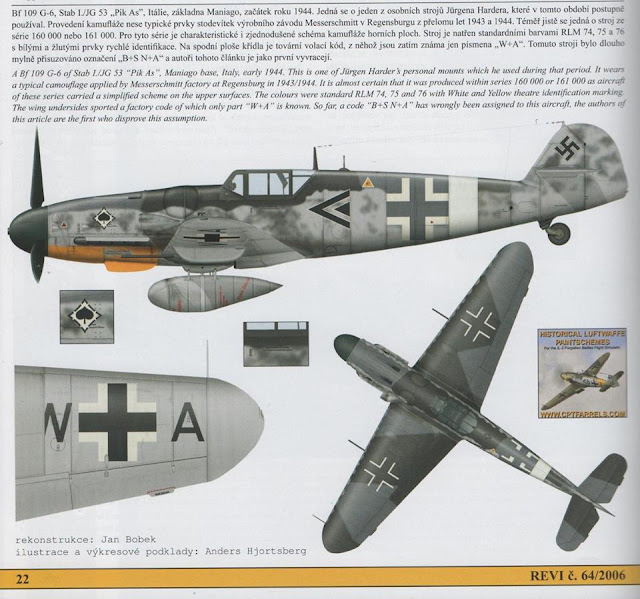 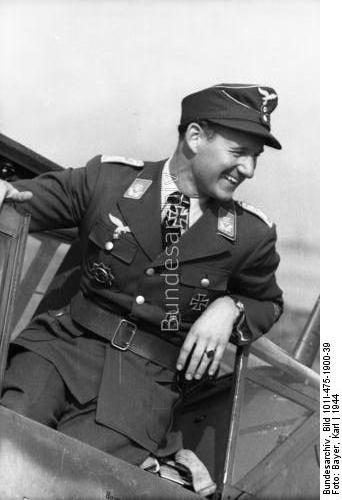 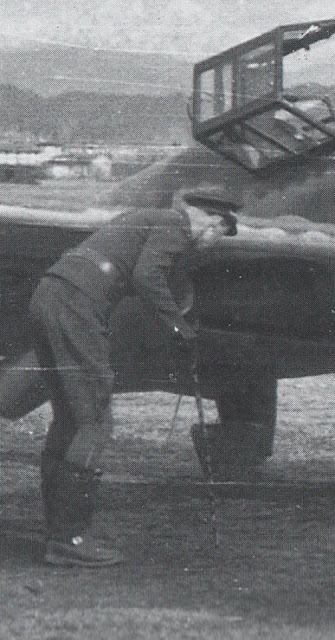