A commentary on  Hundsdörfer's “Red 10” by author/illustrator Richard Goyat;

".. there are three pictures of Hundsdörfer's “Red 10”, all partial. This is the reason why the authors of the JG 300 history did not request a profile artwork of this machine in their JG 300 history "Bataille dans le ciel d'Allemagne" published by Larivière. Too many uncertainties... However, until a photograph of the rear of this aircraft surfaces, I think this Messerschmitt may be rendered as follows:

a) Aircraft type. Certainly not a G-10, but most probably a G-14/AS, as mentioned elsewhere re Gzik's “Red 2” (another 2./JG 300 pilot). Elsewhere in our book Fw. Hajo Riedel can be seen seated on the cowling of “Red 10”. Since Riedel was KIA on September 27, 1944, the series of photographs showing “Red 10” could not have been taken after this date. And according to the Luftwaffe's monthly strength reports and the nominative loss reports, the first G-10s didn't reach I./JG 300 before November 1944.

b) Camouflage. Judging by the visible camouflage, this aircraft was most probably produced by MTT Regensburg. No great surprise here, since in September and October 1944, the bulk of known serial numbers worn by I./JG 300 aircraft was in the 780800-784000 range (MTT Regensburg). Knowing that it was most probably a MTT Regensburg aircraft, you can deduce the style of the unseen camouflage and national markings. In my opinion, “Red 10” must have been painted in a very similar manner as “Yellow 15” WNr. 783891 and “Yellow 12” illustrated on pages 6, 17, 18, 19 and 185 of Eagle Editions' JG 300 volume 2. The only big difference with these latter aircraft is that on Hundsdörfer aircraft, there are signs of heavy overpainting under and ahead of the red number 10.

c) Markings. They are easily discernible on the three photographs from the spinner to the red “10”. The only other possible marking on such an aircraft was the fuselage band, which, if applied, was necessarily red in September 1944...." 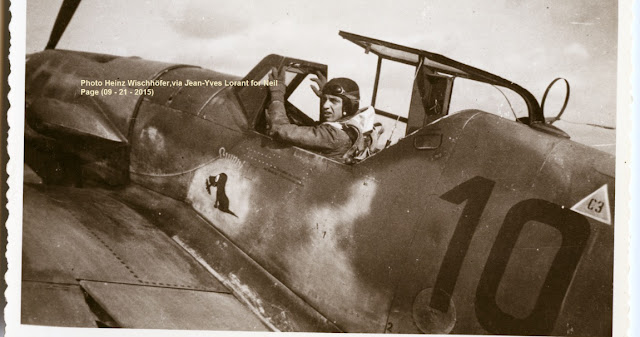