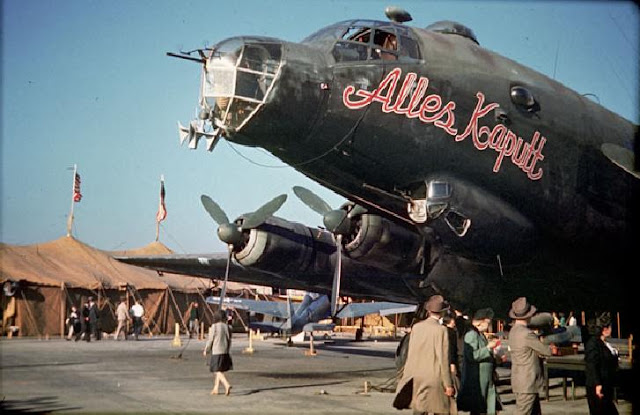 It is perhaps not generally realised that the Luftwaffe did actually put into service a number of four-engine bomber types. One of these of course was the Junkers Ju 290, one of the Luftwaffe’s largest and most formidable aircraft.  However the Ju 290 served primarily in the reconnaissance and transport roles, peforming most of its combat service flying long-range reconnaissance missions with FAGR 5. Formed at Achmer during May 1943, FAGR 5 was established by the Fliegerführer Atlantik on behalf of the Befehlshaber der U-boote as a long range maritime recon group to scout out and locate Allied Atlantic convoys and then shadow them until U-boats could be assembled and close in for the kill. It was intended that the unit would have a complement of some forty Ju 290's - which it never attained. Ju 290s of the unit were equipped with FuG 200 Hohentwiel radar and the Neptun 216, (later 217) rear warning radar to defend against approaching Allied fighters.These Ju 290s were potentially capable of reaching the US - but whether Luftwaffe aircraft did carry out such flights during WWII is doubtful. Nonetheless there was at least one well documented transatlantic flight flown by a Luftwaffe four-engine bomber- albeit post-war. This was the transatlantic ferry performed by ‘Alles Kaputt’, a Junkers Ju 290, which set a transatlantic speed record in the process.

Above; Ju 290 Stammkennzeichnen PI+PS after the addition of US insignia in München Riem, July 1945

Ju 290 A-4 (V7) Werk-Nr. 0165 - displaying its KG 200 Verbandskennzeichen A3+HB and equipped with mounting points for ETC 2000 racks for the carriage of FX 1400, Hs 293, and Hs 294 guided missiles - was surrendered to USAAF personnel by 1./ KG 200 Staffelkapitän Hptm. Heinz Braun on 8 May 1945 when he flew the aircraft into München-Riem from Königgrätz in Czechoslovakia with several dozen female Luftwaffe auxiliaries on board. As the only airworthy example of this giant Luftwaffe bomber secured by Colonel Harold E. Watson’s ATI team (Air Technical Intelligence or “Watson’s Whizzers”) it was decided to fly the aircraft back to ATI HQ at Wright Field Ohio. Hptm. Braun, who had flown both a captured B-17 and B-24 with KG 200, agreed to serve as pilot-instructor to the American team and also provided insight into the aircraft’s capabilities and performance and servicing requirements. He would co-pilot the aircraft to Roth near Nuremburg, then on to Belgium and then France where it was prepared for the transatlantic flight. Prior to its first flight under new ownership -and at the request of the Americans- Braun had sought out BMW mechanics from holding camps of German POWs to replace two of the machines’s BMW engines after metal filings had been found in the oil systems – probably the result of wear rather than sabotage. American radio equipment and a radio compass and other instruments were fitted. 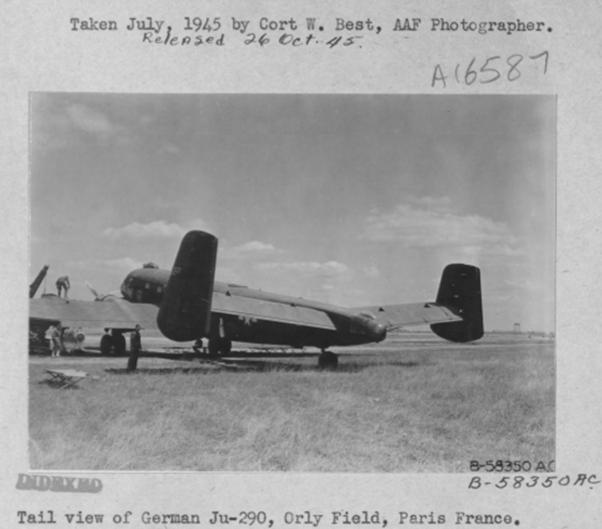 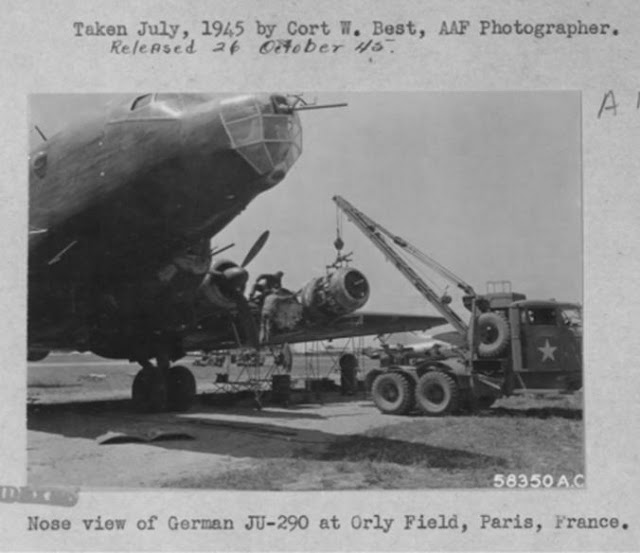 During testing prior to the transatlantic flight another engine change proved necessary and resulted in a flight back to Munich in a C-47 to retrieve a recently manufactured example! However the new BMW engine was too bulky to be loaded onto the American transport and in the end had to be sent to France by road, a journey that took several days, although the engine change itself required barely two hours. By this stage the aircraft was under round-the-clock guard to prevent sabotage. This was not enough to prevent the pilfering of the autopilot control panel. And despite the close attentions of its new crew it was not until the aircraft had arrived in Ohio that a so-called ‘Selbstzerstöranlage’ was located in the wing near a fuel tank – a small explosive device for destroying the aircraft to prevent it falling into the wrong hands! 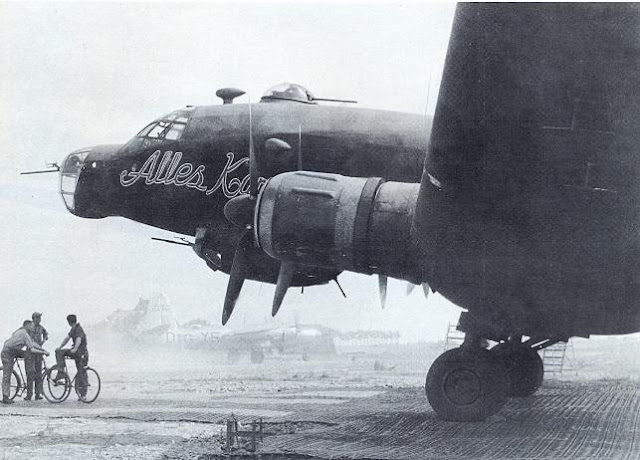 Above;  seen at Paris -Orly in July prior to the US flight. The fairing above the cockpit housed an American radio compass antenna.

The Ju 290 took off for the US from Orly, Paris on 28 July 1945 with Watson at the controls, heading out on the ‘southern’ route for the Azores. In the end the German crew, including pilot Braun, was left behind and did not go to America as some sources claim. According to American calculations at an average speed of 300 km/h and an altitude of 3,000 metres, the Ju 290 possessed an endurance of some 16 to 18 hours and a range of around 4,800 kilometres! This performance was made possible by a 3,800 litre supplementary fuel tank in the fuselage, installed for long-range sorties. Watson’s co-pilot Captain Fred McIntosh wrote an account of the flight published in Sweeting's 'Hitler's Squadron'. The first leg of the journey –some 3,700 km - took nine hours and 10 minutes and due to cloud cover over the island of Santa Maria, required an instrument approach on arriving in the Azores. USAAF Gen. Arnold who was also on the island on his way home from the Potsdam conference was given a tour of the aeroplane. On 30 July the Ju 290 was airborne for the next leg of the journey to Bermuda at its heaviest ever flight weight– but although taking off behind Arnold’s C-54, the Ju 290 arrived in the US some 30 mins ahead of Arnold’s aircraft such was its impressive performance. The final leg of the journey took place on 31 July 1945;

" ..The weather out of Bermuda was fine but the closer we got to Dayton, Ohio the lower the ceilings and visibility was close to VFR minimums. Watson was the only crew member having experience with low frequency beacons and Adcock ranges, and, happily, in the Dayton area. We eventually touched down on Wright Field on our first approach after a flight of only six hours and thirty minutes. The plane was assigned Foreign Evaluation no. 3400 and German markings were reapplied because of upcoming air shows.." (McIntosh) 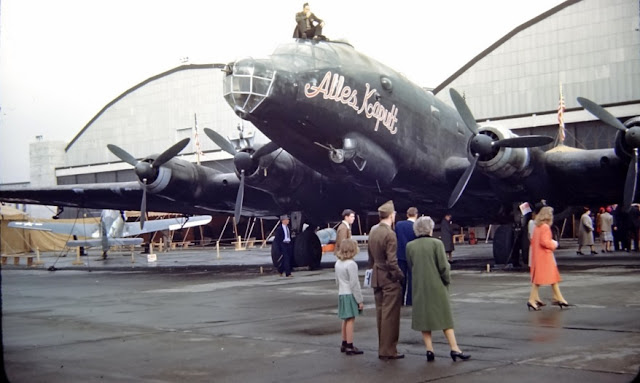 above; one of an amazing set of colour slides -including German aircraft displayed at Wright Patterson AF Base, Dayton, Ohio, 13-21 October 1945. Source is here 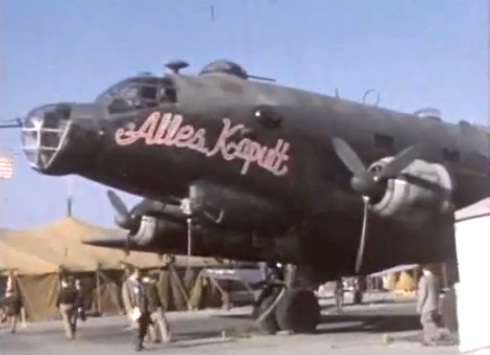 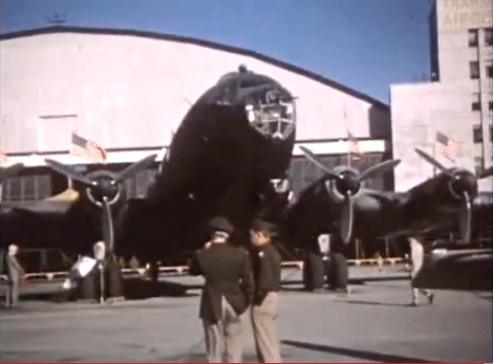 The captured aircraft, with its Hakenkreuze reapplied and displaying the inscription ‘Alles Kaputt’ which had been added in Europe. The Stammkennzeichen PI+PS is over-painted. The aircraft was a frequent performer at air shows at Freeman Field and Wright Field prior to being scrapped in December 1946. The Revell 1/72nd scale Junkers Ju 290 A-7 'Spy version' kit features the 'Alles Kaputt' inscription as a decal.