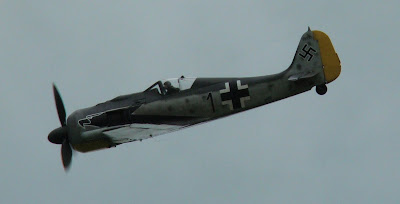 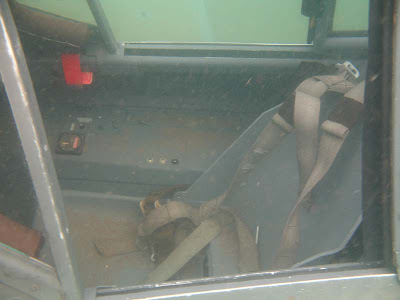 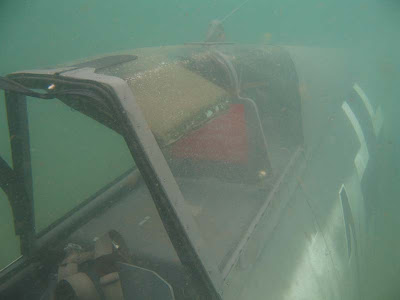 After thrilling the crowds at last years 'Legends' the French Flugwerk Fw 190 now lies at the bottom of the Med ! The aircraft was rehearsing for the '100 years of the Aéronavale' airshow at Hyères (Toulon) on 12 June 2010 when the engine seized in a slow roll. The pilot ditched safely and was picked out of the water by the jet ski club on the beach. The replica Fw 190 now lies 3 metres down with a fair bit of structural damage sustained after hitting the water at over 200 km/h according to the 63 year old pilot - whose 12th crash-landing this was !
Ironically the airport at Hyères was closed barely 24 hours later by torrential rain which has seen mud slides in some towns in the Var region and 8 deaths reported ! (pics via master194.com)

"..  Marc Mathis is an aerobatic ace. Fortunately. His experience enabled him to escape unscathed from what could potentially have a been a fatal accident last Saturday as he was practising for the Hyères airshow in the Var region. .. it was around 14h00 that this 62 year old from Mennecy encountered a technical problem whilst rehearsing in Christian Jacquard's Fw 190, a WW II fighter that he was very familiar with having tested it extensively last year. He was planning to display it at several airshows throughout Europe this year. This unique aircraft - the only one of its type in the world - had already encountered several problems after its rebuild. Saturday was different. The engine - with just thirty five hours on the clock - began to vibrate strongly.   " I lost all revs.." said  Marc.  The pilot, with over 1,600 aerobatic hours in his logbook was at that moment over a built-up area some distance from the runway. He elected to put down on the only open area available - the sea. In just twelve seconds the aircraft came down, hitting the waves at 250 km/h Ditching the aircraft  some 100 metres from the shore, the pilot said, " thanks to my experience I was able to take the right decision and carry it out very rapidly..." But Mathis was trapped by his parachute in the cockpit, unable to extricate himself. Fortunately some jet-skiers were on hand to cut the straps, freeing Marc from a watery end. This was not though the first near miss for the former Air Liberté airline pilot - it was the 12th time he has had to carry out an emergency landing..."