Aficionados of the Messerschmitt Bf 109 have so far this year enjoyed some great new kits - Eduard, Zvezda and Trumpeter have all produced fantastic 109s in various scales in 2010. Airfix eases into the frame just in time for the 70th anniversary of the Battle of Britain and the airshow season with this new quarter-scale kit of the iconic Emil. Now given recent Airfix releases, the hard-bitten Luftwaffe enthusiast might be forgiven for thinking that a new Airfix Emil is unlikely to be worth investigating. One thing is sure, Airfix will have to come up with something special to make any sort of impression. 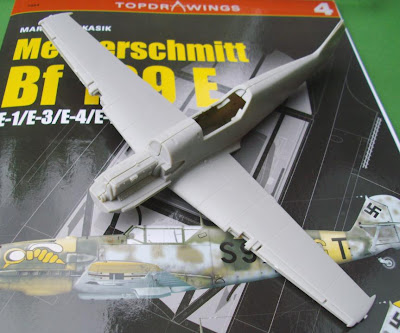 And I think they have. While some of Airfix's recent offerings have attracted the brickbats for their heavy panel lines and somewhat coarse detail, this latest release shows some real finesse among its 107 parts, notwithstanding some of the trade-mark 'clunkiness' here and there. I was keen to start this kit as soon as I got it home as you can see here. Using the Kagero plans published in the excellent 'Top Drawings' series the accuracy of this new Airfix Emil certainly stands up to close scrutiny and shows exceptional promise right out of the box.

Consider whats on offer - separate slats, flaps, rudder and control surfaces, one-piece upper and lower cowl, a neatly moulded engine, a choice of different canopies, separate gun bulges and leading edge inserts, optional bombs and racks, a drop tank, alternative spinners, bulged wheels ... in fact everything you'd need in one box to make any Me 109 E variant from an E-1 right the way through to an E-7. The E-1 carried two 7.92 mm MG 17s above the engine and two more in the wings. The E-1B became the first operational Bf 109 fighter bomber. These were fitted with either one central bomb rack, carrying one 250 kg bomb, or the larger racks carrying four 50 kg bombs. All included. The E-3 was armed with the two MG 17s above the engine and one MG FF cannon in each wing. The E-3 was replaced by the E-4 (with many airframes being upgraded to E-4 standards starting at the beginning of the Battle of Britain) which was different in some small details, most notably by using the modified 20 mm MG-FF/M wing cannon and having improved head armour for the pilot. All these options are possible out of the box. And no special boxings required here if planning a Tropical version - the filter intake is in the box - although there are no 'Trop' options on the decal sheet! Airfix also include an "engine" with some decent detail as part of the fuselage halves. While some will turn their noses up, it has to be said that if that block of plastic wasn't there the fuselage halves would be weak and flexible and very hard to build with the separate top and bottom cowlings. And any representation of an engine looks a lot better than an empty space behind the vents in the upper engine cover. It is very difficult to find anything to get too seriously hot under the collar about in this box - by which I mean the rivet-counters will have meagre pickings. At a push you might comment on the cowl gun troughs which look slightly too pronounced - nothing that can't be sorted with some wet-and-dry. The cockpit detail is a little soft perhaps, the oxygen regulator undersized and the belts moulded on the seat are not particularly convincing. But the throttle quadrant is a separate part as are the rudder pedals and bar. Just about everything else appears spot on. The bulged wheels with their separate hubs will look excellent when painted as will the fabric effect on the control surfaces. Very subtle. All too often that sort of thing is overdone. There are no less than four different windscreens. I haven't worked out yet what they are all for, but one of them is the modified windscreen for Adolf Galland's machine. There is one small problem with the E4/7 canopy - the mid-section has the heavy framing and the 'side' frame associated with the later 'G' variants. Not a problem if doing the earlier E1-3. The ordnance racks come complete with the attachment lugs as separate parts. The weakest parts of the Tamiya kit - the engine exhaust ejector stubs, the prop and the undernourished tailwheel - are much more convincing here.

The small decal sheet enables three subjects to be completed and includes full stencil detail, but while the decals themselves are well printed, they have a matte finish which doesn't bode well and I imagine most Luftwaffe modellers will want to replace them with something else.

The acid test will be in the build of course, but I don't envisage any problems here. The only potential issue I can see is the location of some ejector pin marks on the cockpit walls and one pin mark in the roof of each undercarriage well which will be pretty hard to fill (see photo) Parts break-down almost exactly replicates the Tamiya Emils and those kits virtually build themselves as we know. In fact the fuselage/wing assembly holds together very securely with no tape or glue - or gaps ! (see photo) The more I look at these new Airfix sprues the more I'm inclined to think that this potentially rates up there with the Tamiya Emil E-3 boxing I'm currently finishing off. However Airfix go further and are to be commended for putting literally everything in the box for a bit less ..hopefully I'll get to finish my first one this week.

The build - or at least the final part of it - is here on my modelling blog.
new Airfix 48th scale Emil build
Navigate backwards from this page for the rest 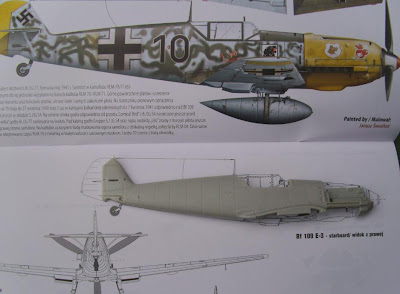 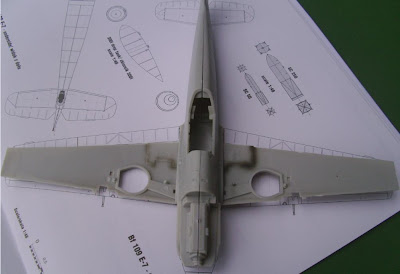 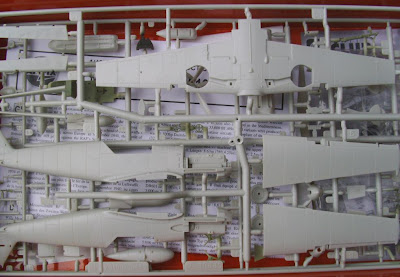 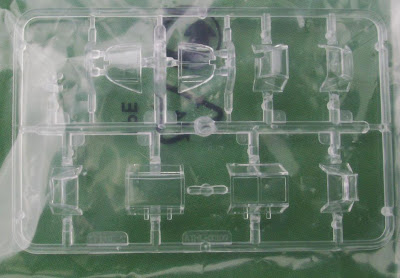