A few years ago Theo Boiten asked me if I wouldn't mind helping out on his Nachtjagd War Diaries project published by Red Kite in 2008. In the end I translated about 65 pages worth of vets accounts including Peter Spoden's moving and eloquent Foreword.

Here is one of the lengthy personal accounts that I translated for the book.

Written by Karl Johanssen, he describes his most memorable sortie, flown on the night of 14/15 March 1945, when his 'Kutscher' or 'driver', leading nightfighter ace Martin 'Tino' Becker, claimed nine Lancaster bombers shot down (victories 49-57) a Nachtjagd record. Three of Becker's victims were in fact shot down by his crewman Karl Johanssen with his MG 131 rearward facing armament.

When I was finally able to peruse the books I was hugely impressed with the sheer size of the two tomes (total of 750+ pages!) and the evident deep research therein. If pushed I'd say the four or five different font sizes make some of the pages look a little untidy at first glance, but only in places (claims info, text, pic captions, personal account side bars) while I guess Vol II is a touch short on pics (a few too many generic images from ww2images.com) but very text heavy. These are really pretty minor league criticisms though. The list of sources, contributors, bibliography and explanation of methodology are eye-opening. Considering there is little or no info out there for 1945 Vol II especially is a superb achievement. The special collectors edition is currently available from publisher Red Kite books with a reprint of the two titles planned for late 2010. 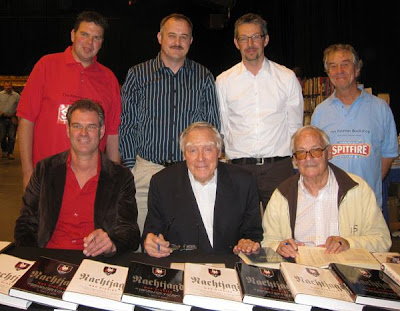 Peter Spoden and Rolf Ebhardt sitting with author Theo Boiten at the launch of the Nachtjagd War Diaries. Standing behind are Rod Mackenzie and Mark Postlethwaite, flanked by the team from The Aviation Bookshop who organised the launch. (Hi Simon!)