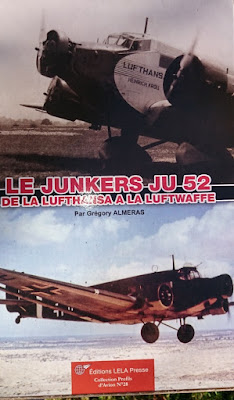 Grégory Almeras is a 39-year old WW II aviation enthusiast based near Montpellier in the south of France. He has spent the past ten years assembling a collection of photos of the Junkers Ju 52 and writing detailed captions retracing the story of this iconic aircraft. This new book is the result of all those hours spent poring over his photo albums. At 176 A-4 pages in hardback and featuring over 350 photos, the book is essentially a photo compilation organised into 23 chapters with one, two or three photos per page and captions of a corresponding length (some at least one half page) - in French. The images are mostly excellent, previously unpublished and cover the type's early career as a civilian airliner and transport, with one chapter given over to the French AAC 1 Toucan. The bulk of the work features the type in service with the Luftwaffe prior to and during WWII with much detail of the many resupply operations mounted by the Germans on the Eastern Front. The campaign in the West and other theatres such as Crete, Scandinavia and North Africa also feature. Each chapter has a short introductory text. Some twenty large scale artworks by Thierry Dekker are distributed throughout, while one chapter covers the restoration of a French Ju 52 detailing internal and cockpit views. There is also a small modelling chapter. The author explains that none of the period photos are enhanced or cropped or otherwise manipulated to enable the full context to be appreciated. For the most part they were taken by the crews themselves in the heat of the action. So while a few are less than perfect, many are absolutely first-rate and, reproduced large, take us right into the daily lives of the men that flew or maintained the aircraft through some of the most dramatic moments of WWII and post-war history. A very nice addition to the literature in my view. Below 'sample' photos, captions and general page views courtesy of author Grég Almeras. 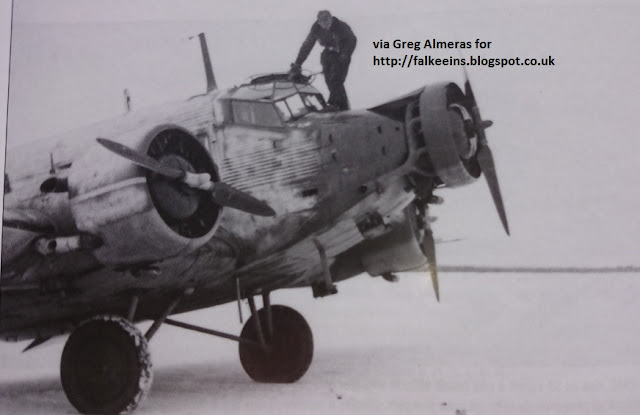 Above; Junkers Ju 52 KC+RV (WNr. 7198) seen somewhere seen in the Soukhinitchi sector in the East during January 1942. A crew member is checking the forward defensive MG turret. Prior to being assigned to a Front unit, this machine was serving with FFS C8 at Wiener-Neustadt, a multi-engine training school. During December 1941 Soviet pressure on the central sector had firmed and was increasing, leading to the establishment and dispatch to the front of new transport units, KGr zbv 700, 800, 900 and 999 assembled utilising school machines such as this one. Typically this aircraft is still displaying its factory codes, there being no time to replace them with unit tactical codes. These new Transporter units were quickly sent north to participate in the airlift into Demyansk. During moments of crisis such as Demyansk ad-hoc transport units were hastily assembled and sent to the front often for only a matter of a month or two which meant there was little or no time for codes or emblems - one such unit was KGrzbv 7 which existed for two months during February and March 1942. Note the wing de-icing system common to several Ju 52 variants - the lower engine exhausts feeding directly into the wing leading edge. The thin yellow horizontal band on the cowling was an ID feature. Note also the steel plate cover over the nose engine to the fuselage designed to prevent the oil thrown from obscuring the windscreen and cockpit glazing.

Below; taken on  taken on 5 June 1942 this snapshot depicts a moment of respite for this crew based at Flugplatz Nikolajew, a rear area base in the Ukraine north-west of the Crimean peninsula. Things weren't always this quiet. Barely three months previously this field was the scene of a very successful partisan action. During March 1942 a Russian worker managed to place dynamite among a large stock of bombs and blew several hangars and some twenty aircraft of JG 77 and StG 77 sky high. Captured by 16. Panzer division on 13 August 1941, Nikolajew had quickly become an important Luftwaffe platform as the front moved further eastwards. Additional hangars and concrete runways were constructed. Note the open cockpit access door on this Ju 52 g7e, the variant confirmed by the absence of a generator on the starboard fuselage side. Note also the small mirror on the inner cowl face of the port engine which helped the pilot to synchronise the propellers by enabling him to set up a 'strobe' effect with the nose engine prop by adjusting the engine revolutions accordingly.  The most experienced pilots simply relied on their feel for the aircraft to perform this type of adjustment. 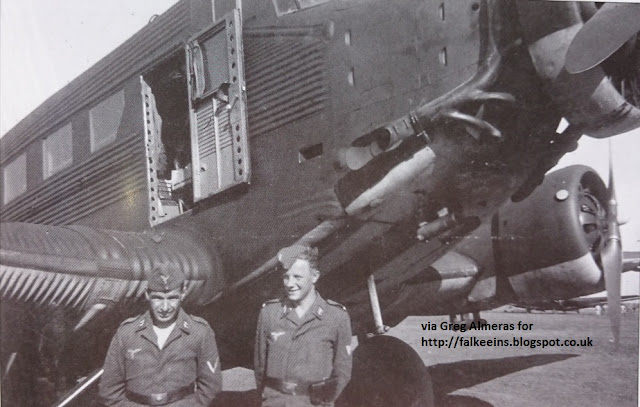 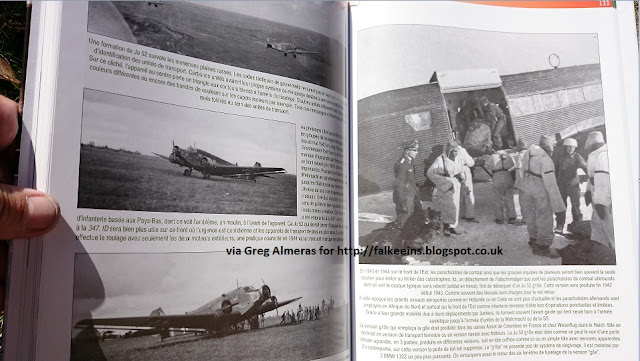 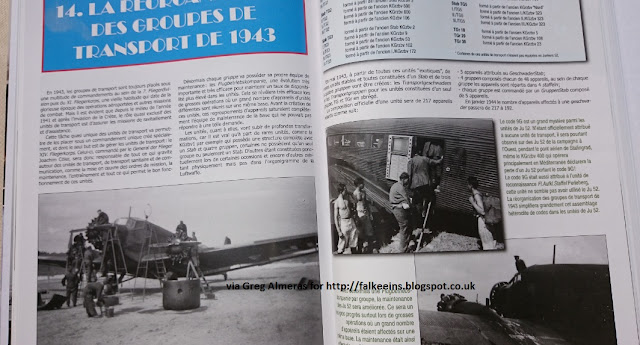 Ten-page PDF extract on the publisher's web site here
Posted by FalkeEins at 13:16