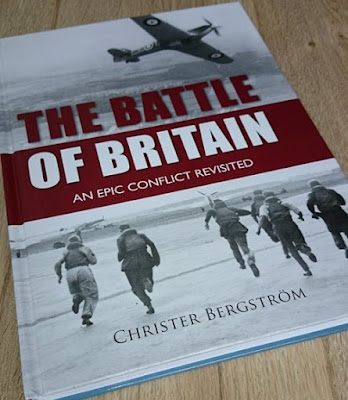 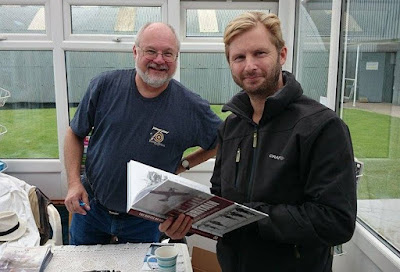 ..after watching the 75th anniversary Battle of Britain flypast on the cliffs at Capel (between Folkestone and Dover and site of the Battle of Britain Memorial) we moved on to Hawkinge for the launch of Christer Bergstrom's new book, ' The Battle of Britain -an epic conflict revisited' (Casemate) at the Kent Battle of Britain museum. The book certainly looks impressive and the paper quality is reasonably good - the artworks are very nice and there is a good selection of interesting pics. The text is very readable (not cluttered with details such as WNr. etc..) and the presentation is in a diary format. There are over 500 'notes' at the rear of the book.
A couple of points that struck me while dipping in and out of the contents;
- the contribution that Bomber Command made to the RAF's success in the Battle of Britain - RAF bombers operated throughout the summer over Germany and the occupied countries, kept the pressure on psychologically, directly contributing to the 'indecision' in the Luftwaffe leadership ...(London vs. the airfields).
- the 're-appraisal' of combat losses on both sides - the RAF's being much higher for the four months July to October
- the re-evaluation of the performance of the Bf 110 units, which enjoyed better 'kill' ratios than the 109 units; " the Bf 109's alleged superiority over the Bf 110 finds no support in these statistics.."

More on the book from publishers Casemate here

I was impressed with Christer - a very engaging and genial character- and his new book looks to be excellent. Here Morten (Jessen) and I are clutching our copies while I struggle to hold onto Lady (my Pomeranian) who has just spotted 'Scramble' the museum cat - nearly had a 'dogfight' on our hands! 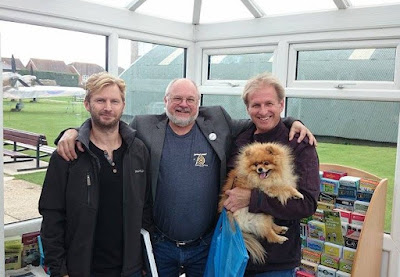