Rare images of 1./ JG 300 wilde Sau Bf 109s at Bonn Hangelar, late 1943 or early 1944.  Unlike other sites that have these images on display having 'doctored' them we at the Luftwaffe blog have preferred to leave them as first shown on Ebay.

Below; "White 4" and "White 1", are G-6s, of 1. Staffel in light-blue-grey finish, probably deployed at some stage on high-altitude Moskito chasing sorties. Note the whistle on the exhaust stack. These machines are not G-5s as other sites would have you believe. Needless to say this particular photo is an important image in the history of JG 300. Some never-before illustrated aspects of this machine for JG 300 have been identified by the new owner - mission role, equipment etc. The pilot in the picture - probably posing for the camera alongside his rudder scoreboard - is the ace Hermann Wischnewski. It was thought at one point that the object under the fuselage may have a been a Naxos but it is now clear that it is simply the deployed flap of the starboard wing! The actual images show the Werknummmer and the details that the ace pilot is looking at on his rudder.  Not that you would get any of this information on other sites. To the modellers and profile artists who might attempt a rendition of this one, I'd have to respectfully advise against it ..not only are the WNr. and victory markings not visible but you'll miss one, if not two crucial details! 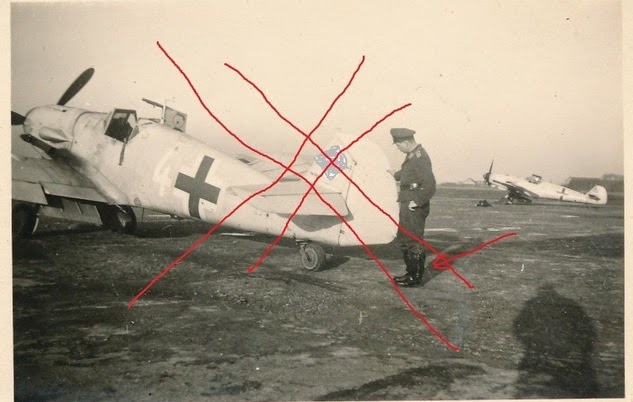 Hermann Wischnewski was born on 9 February 1917 at Tensefeld in the Eutin region of Holstein. Wischnewski was posted to I./KGr. zbV 700 as a transport pilot on 17 December 1941. He flew many difficult supply missions over the Eastern front, including missions in the Demjansk battles of spring 1942. In October 1942, Wischnewski transferred to KGr. zbV Frankfurt based in the Mediterranean theatre. In July 1943, Wischnewski underwent conversion training on to single-engine night fighters. He was posted to JG Herrmann performing Wilde Sau missions intercepting Allied bombing raids by night. Feldwebel Wischnewski was assigned to 3./JG Herrmann. On the night of 30/31 July, Wischnewski recorded his first victory when he shot down a RAF Stirling four-engine bomber near Remscheid. In late August, 3./JG Herrmann was redesignated 3./JG 300. By the end of September, Wischnewski had four victories to his credit. By November 1943, Oberfeldwebel Wischnewski was serving with 1./JG 300. On the night of 18/19 November, Wischnewski claimed two RAF four-engine bombers shot down from a force of 300 raiding Mannheim to record his fifth and sixth victories. By the end of the year, he had seven victories to his credit. Wischnewski recorded five victories in January 1944, including doubles on each of the nights of 2/3 January (9-10) and 28/29 January (11-12). Wischnewski would also record many day victories when JG 300 was switched to the day fighter role. Serving with 2./JG 300, he recorded his first day victory on 21 June 1944, when he claimed a USAAF B-24 Herauschuß. On 29 July 1944, Fahnenjunker-Oberfeldwebel Wischnewski shot down two USAAF B-17 four-engine bombers and a USAAF P-51 fighter but he was then shot down himself. Wounded in the left leg and foot, he baled out of his stricken Bf 109 G-6/U2 “Red 2” near Gelbstadt at low level. The force of his parachute opening wrenched his arms out of their sockets. Because of the low-level bale-out, Wischnewski’s landing was heavy resulting in further injuries. He was hospitalised at Apolda for six months. Wischnewski’s injuries precluded a return to combat. Hermann Wischnewski was credited with at least 24 victories in over 500 missions. The preponderance of his missions were flown as a transport pilot. He recorded 18 victories by night. Of his 6 day victories, four were four-engine bombers.

(pilot biography compiled with the help of the Lorant/Goyat JG 300 history, both volumes translated by this blog author....if you think you've read any of the above on one of Dan Case's FB pages then you very probably have since he lifts just about everything I write and research on this blog and posts it elsewhere without acknowledgement of course...just check the dates of posting ) 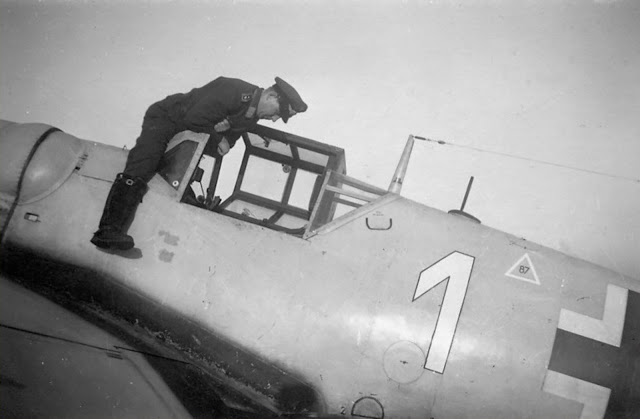 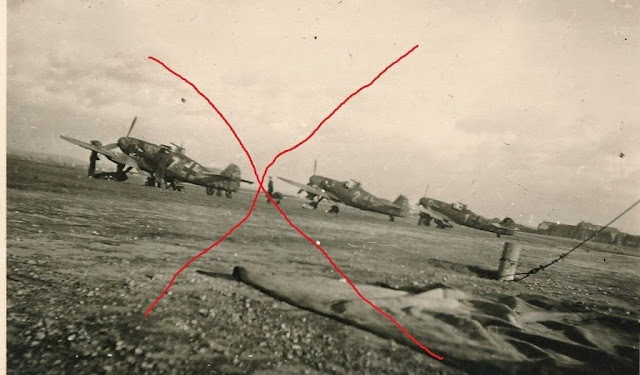 This close-up of the main image depicts  another "White 1", the aircraft assigned to the Staffelkapitan of 1./JG 300 Olt Gerhard Pilz. Note what appears to be the wilde Sau boar's head emblem on the nose of this machine. A photo of the other side of this line-up has been previously published in the Lorant/Goyat history of JG 300 and originates from former JG 300 fitter Erwin Dill's album. However this veteran stated that these pictures were taken at Herzogenaurach near Nürnberg. This new view clearly shows the Saint-Augustin convent in the background, which situates the image firmly at Bonn-Hangelar during the spring of 1944. 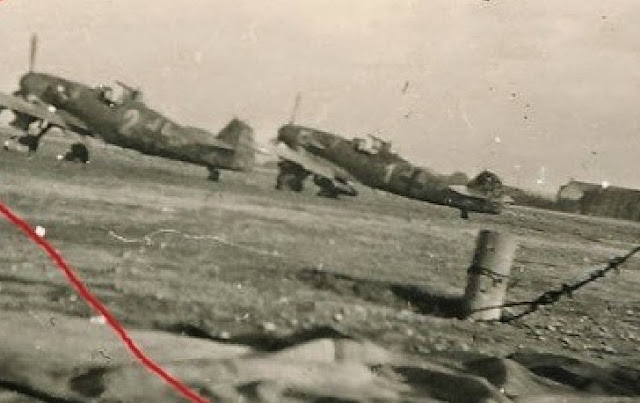 This brings me to a point raised by Don Caldwell in the Foreword to his "Day Fighters in Defence of the Reich" ;

".. photos and document, once freely shared in the 1980s and 1990s now appear on ebay to be sold to wealthy collectors, frequently never to be seen again by the general public. The small band of serious air war historians and enthusiasts has fought this pernicious trend by freely sharing this material..."

Only in this instance it is one of those 'serious air war historians' that has managed to secure these images at great personal expense. He elected to acquire them, precisely because he was able to identify exactly how 'key' these images are in the history of JG 300 - the 'enthusiasts' however continue to post them in 'their' on-line 'collections', tamper with what are pretty poor quality scans under the pretext of 'cleaning them up' and present them to the world while unable to provide any context or story. To have them loosely and inaccurately labelled as most on-line image collections do, serves in my view to depreciate their value somewhat and leads to misinformation and myth. And before anyone bothers to say, yes, I'm aware that I am no better, but in this instance, a vague caption will have to suffice, at the request of the images' new owner. After all what will make the REAL difference is the details that their new owner will be able to develop around these images, setting their context, sense and perspective. Because these images will re-appear in a revised edition of their unit's history. They are first grade testimonies, the full impact of which will only become apparent over time, when their secrets are revealed....

And a comment on our forum spat regarding the posting of these images. As far as I am concerned I think its reasonable enough to re-post pictures of this quality during an Ebay auction (most sellers who I have contacted are happy to let me do this..), but I would expect to take them down at the end of the auction when/if the new owner requests this. After all, most enthusiasts - and certainly not David Weiss - wouldn't dream of spending 1,000 euros on a set of images, would they? In my view the new owner is perfectly entitled to 'protect' his investment. I, for one, am happy these images have been bought by a 'serious enthusiast/historian'.. .

Below; a new image of "White 7" 1./ JG 300. Note the wavy camouflage finish taken over the spinner on the lower images and the absence of red fuselage band. 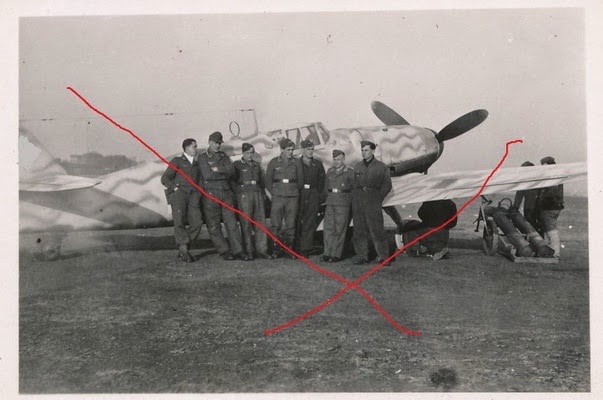 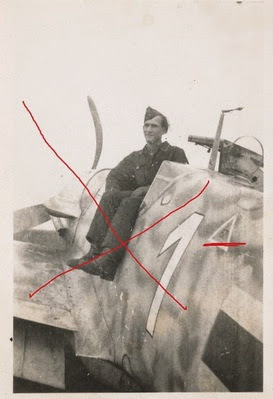 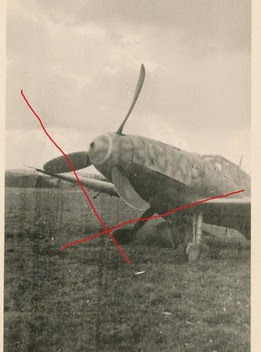