" I always thought the German claims system was very robust during WW2 .."

We've touched on this subject and the over-claiming of Luftwaffe fighter aces elsewhere on this blog, most notably with regard to Erich Hartmann and his 352 victory total repeated ad nauseam in the literature...

The usual comeback is that all sides over-claimed in the heat of combat and that the claims somehow reflect "the intensity of the fighting". Which may or may not be the case, but the fact is that the Luftwaffe's leading fighter Geschwader JG 2 made something of an art of it as a reading of Erik Mombeeck's history of JG 2 covering the year 1941 makes clear. From the Kommodoren to the Kommandeure down to the Staffelkapitäne over-claiming appears to have been endemic in this unit. For example, the Kommandeur III./JG 2 Hans "Assi" Hahn is generally credited with 108 victories, 66 of which were scored on the Western Front. This total - to no-one's apparent disbelief - includes 53 Spitfires! And then transferred to the Eastern Front he scored a further 42 victories against the Soviets..in just three months!

During 1941 the RAF started its 'lean into Europe'. "Circuses" flown by the RAF against targets in France were initially met with little opposition and in fact regarded as no more than mere 'prin-pricks'. However the lack of success during the early weeks of 1941 prompted a 'dressing-down' from the Luftwaffe's High Command as Oblt. Siegfried Bethke, Staffelkapitän 2./JG 2, noted in his diary;

" 28 January 1941.  The sky is clear. Fine weather. The Kommodoren of the fighter Geschwader - including our own Hptm. Hahn - have been summoned to see the Reichsmarschall. Apparently they have been on the receiving end of an almighty dressing-down. Firstly on account of the poor results against the British fighter escort during the attack (10 January). Secondly on account of the lack of military bearing displayed by the fighter units (apparently noted during the visit of the Führer the previous Christmas). And lastly because of general slovenliness and poor turn out. What is required is a 'spring clean' and the appointment of younger more vigorous Kommodoren and Kommandeure." **

Which may or may not explain what followed.

The RAF mounted a whole series of different types of operations designed to bring the Luftwaffe up to fight. Aerial activity over Brittany was especially intense as the RAF had the German battle cruisers, the Scharnhorst, Prinz Eugen and the Gneisenau effectively trapped in the French Atlantic ports.  During this period 'Assi' Hahn and his colleagues were credited with a whole bunch of Spitfire claims that do not stand close examination.

23 July 1941.  JG 2 claimed no less than 29 Spitfires with another 10 Spitfire claims being awarded to JG 26 for that same day. Actual Spitfire losses for 23 July were just 15. The actions on 23 July 1941 also saw JG 2 awarded their first three B-17 Fortresses shot down - in fact the aircraft attacked were N° 15 Squadron Stirlings raiding the Scharnhorst in dock at La Pallice - one was lost. The following day saw the largest daylight RAF raid of 1941 with over one hundred bombers committed over the German ships and diversionary Circuses flown over northern France.

Early August 1941 saw a plethora of decorations awarded to JG 2 pilots - the Ritterkreuz was awarded on no fewer than five occasions that summer.

- Lt. Egon Mayer  who had raised his victory score from 3 to 18 in little more than two months
- Oblt. Rudolf Pflanz (Geschwaderstab) for 19 victories

12 August 1941, Circus No. 69 targeting St-Omer and No. 70 Gosnay. No more than six Spitfire losses during the day (from Nos. 42, 222, 485 and 602 Squadrons). Yet JG 2 Kommodore Major Walter Oesau was credited with no fewer than five Spitfires in ninety minutes, while Oblt. Erich Leie claimed three Spitfires and Hahn three more.

Hahn's award of the Oakleaves to his Knight's Cross also arrived in August following his 42nd victory  while two more awards of the Ritterkreuz were made;  to Ofw. Josef Wurmheller for 32 victories, 12 achieved since joining the Stab II./JG 2 in July, and Ofw. Kurt Bühligen.

The RAF flew three Circuses on 20 September 1941. Only seven Spitfires were lost, although JG 2 in concert with its subordinated training Staffel 4./JFS 5 claimed some 25 of them (!), with three 'falling' to Hahn. In the case of this latter unit it may be that the acceptance of such large numbers of claims was intended to raise morale of a young and inexperienced unit. Certainly the pilots flying with 4./JFS 5 had little experience at the controls of their Emils and would have little chance against well-trained RAF fighter pilots.

Hahn was credited with his 50th victory following the Circus flown on 13 October 1941 but he was still some way behind Lt. Siegfried Schnell, another JG 2 Oakleaves winner who had claimed his 50th during September.

Although this little piece touches on just four British incursions over France during 1941 I think you can see the point I'm trying to make here. Perhaps the over-claiming touched on was simply  ".. a reflection of the intensity of the fighting.. " but there seems to me to be no evidence for a "robust claims system" here. Rather what drove the Jagdflieger appears to be an almost over-riding concern for the Abschussliste - the system of points and then decorations awarded for a certain number of 'victories'- which was ultimately no more than personal ambition and the need for recognition. There is much more detail on this and other aspects of JG 2 during 1941 including personal accounts in Erik Mombeeck's volume. More from http://luftwaffe.be/ 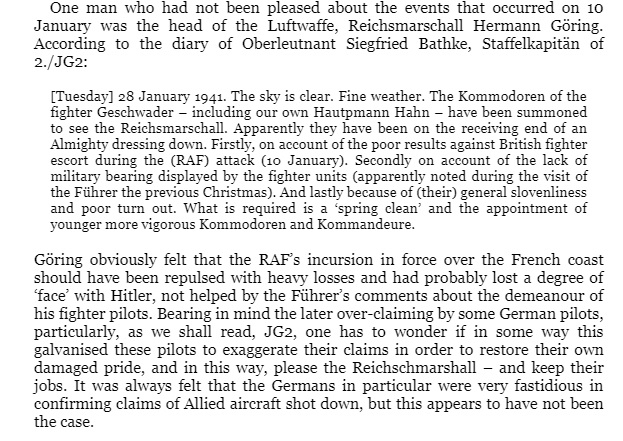