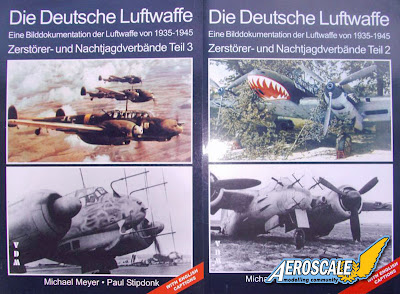 German authors Paul Stipdonk and Michael Meyer have recently published Volume 4 in their "Die Deutsche Luftwaffe - Zerstörer- und Nachtjagdverbände" series through VDM Heinz Nickel, Zweibrücken, Germany. As the title suggests these books are primarily concerned with Luftwaffe Zerstörer (‘destroyer’ or heavy fighters) and Nachtjagd (nightfighting) operations and are essentially photo journals with German and English captions. The authors have released one book per year over the past four years with each volume featuring around 400-500 images over 200 pages in an A4 soft-back format. Most of the photos in each volume are previously unpublished and well printed. They are captioned in German and English except for the latest, Volume 4, which is German-language only. There is also a small section of period colour shots, but the vast majority of shots are in black and white. In general photo quality is good and when not it is generally to illustrate a rarity. For instance, volume 2 includes for the first time anywhere pictures of the Z Staffel of KG30 and a new ZG 1 emblem on a Bf109E. Text throughout is minimal, but listings of unit leaders and changes in unit reporting structures are given.
Volume One covers...
Erg.Zerstörergruppe
Nachtjagdgeschwader 1
Zerstörergeschwader 1
Nachtjagdschule 1
Liaison and HQ Staff for the above units 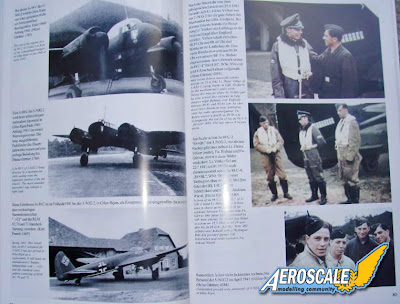 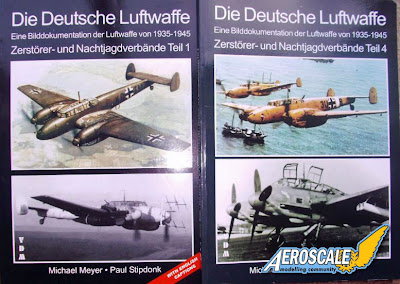 Volume 4 deals with the remaining Gruppen of ZG26

My only gripe with these books is the indifferent quality of the English captions - in fact volume 4 doesn’t include any translations at all due to cost-cutting measures by the publisher. I subsequently contacted the authors to offer English translations for the rest of the series and the new book series devoted to Jagdwaffe fighters. Even without English captions this latest volume is still very good and more than maintains the standards set by this great series. Even better if you can manage the German. Even if you can't, some of the images are worth the purchase price alone - the NJG 4 Ju88 with an enormous Haifischmaul (sharkmouth) or the selection of ‘new’ ZG 26 Me410A-1/U4 images with the crews seen gazing rather dubiously at the BK5 cannon installation. You can almost hear them saying "What the ...!" The cover of next year's Volume 5 is advertised at the back of the book and features a superb Ju88G in flight & a "with English captions" banner. ( edit - May 2011  - just finished translating the captions concerned...) 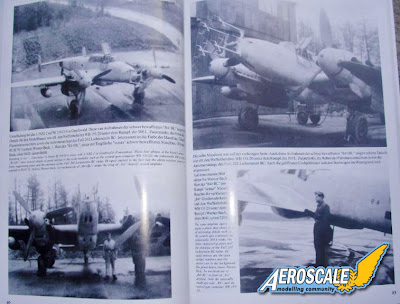 This series of books deserves a place on the bookshelf of every serious Luftwaffe modeller and aficionado. Volume 4 can be ordered direct from co-author Paul Stipdonk. Please Paypal € 37,- per copy inc. postage for the UK (and EU-Europe) and € 43,- for mailing to USA (and non EU-Europe) to Paul's Paypal mail address which is; pstipdonk at hotmail.com (obviously replacing 'at' with @ and leaving no spaces). Any queries also go to this address. Please mention that you saw it here ! Alternatively available at the VDM Verlag Heinz Nickel homepage. My thanks to Paul for permission to reproduce the page views accompanying this review which first appeared on aeroscale.co.uk (hence their watermark) 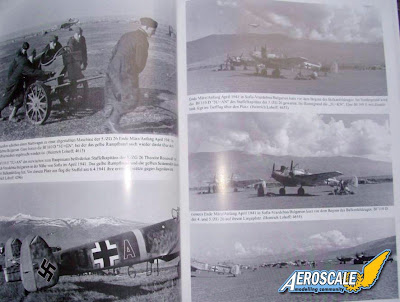