A very interesting article in the latest Jet & Prop (4/10) by Norbert Loy and Matthias Hundt deals with story of the satellite field at Brunnthal built to accomodate Luftwaffe aircraft as an 'Ausweichs' or diversionary field, offering an alternative to the regular fields at München-Neubiberg and München-Riem which were on the end of almost constant Allied air attacks as the Americans pushed further and further into southern Germany during 1945. A so-called 'Schattenplatz' or 'shadow' field was constructed between the town of Brunnthal and the Hofoldinger forest bounded on one side by the Munich-Salzburg Autobahn. There were two takeoff and landing strips constructed, although one of these was the A8 Autobahn itself. Aircraft including Me 262s were hidden along the forest perimeter in specially cut-out boxes and it is reported that animals were used to tow the aircraft into position on the airfield because of fuel shortages - not the usual oxen or horses, but two elephants from the Munich zoo. However the elephants didn't perform that war service for long - they were not susceptible to obeying commands and at least one aircraft lost its wings as the elephant stomped into the forest ! The authors have contacted American veterans and local eyewitnesses in the course of preparing a book manuscript dealing more fully with the story of the Brunnthal airfield


Wars end in Bavaria. Allied troops moving along the Munich-Salzberg Autobahn towards Salzberg pass abandoned Luftwaffe jets including this Me 262 'White F' coded 9K+FH on the strength of KG 51 and probably re-assigned to JV44 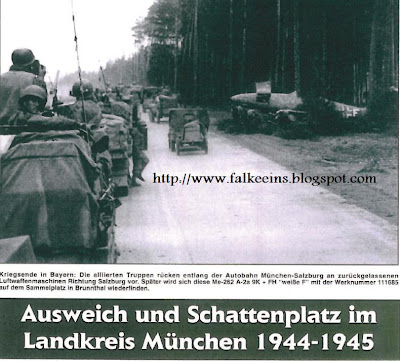 Jet & Prop back issues are available at the VDM Verlag Heinz Nickel homepage. 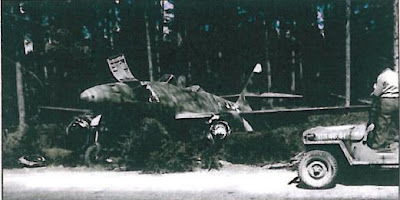