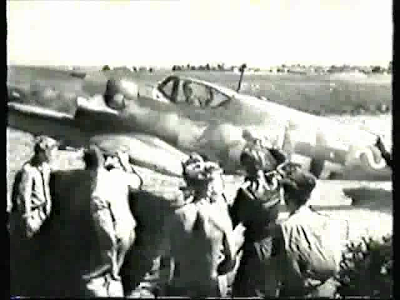 WW II 'Ace of aces' is Erich Hartmann. His victory toal of '352' confirmed kills has assumed legendary status - but is probably some way from the actual number of aerial victories achieved by Hartmann. The figure of '352' was probably first presented as his 'official' victory total in Toliver's 'Blond Knight..', a book that was written at the height of the Cold War.

In the words of one historian 'Blond Knight' "..offered little research, nothing from Russian archives and no bibliography..".***

Most researchers appear to have rather discounted it in any discussion of Hartmann's record. Since the the late 1960s some have attempted to look a little more critically at Hartmann's record and a recent article by Russian researcher Dimitri Khazanov went much further. If Khazanov has an agenda, it is nonetheless the case that certain statements he makes regarding Hartmann's total are valid.

The debate is currently raging yet again on various forums (..and again, on TOCH during May 2016)

Few contributors appear to have read Khazanov's material which was presented first in an article published by French magazine 'Le Fana de l'Aviation'. Khazanov's 'research' as presented in the article mentions several occasions when Hartmann claimed multiple victories and where the VVS suffered few or no losses at all. A number of such cases were detailed by Khazanov;

* 29.05.1944: During the Soviet air strike against the Romanian airbase of Novela, Erich Hartmann claimed three "LaGG-7s" (La-5s) shot down. In fact, the Soviet 5 VA did suffer losses - three Il-2, but the 302 IAD, which provided escort for the attack and was equipped with the La-5FN, did not suffer any losses ..

* 4.06.1944:  on this date during the fourth sortie of the day, Hartmann and his wingman Birkner were jumped by two Airacobras, with Hartmann shooting down both P-39s. Khazanov determined that they would have been the Airacobras flown by Mayor B. B. Gakhaet and Leytenant Nikolay L. Trofimov of the famous 16 GIAP. Both Airacobras returned home "..without a scratch! "

* 4.07.1944: Hartmann claimed three Il-2s north of Yassy, which were attacking German artillery positions. The formation attacked by Hartmann were 12 Il-2s of the 2 ShAK led by Leytenant Frolov, but they lost only one Shturmovik, which made a belly-landing in Soviet-held territory.

* 24.08.1944:  on this day Hartmann claimed his victories Nos.299 to 303 over the Soviet beachhead of Sandomierz across the Vistula river - all four were P-39s. The only unit equipped with Aircobras providing cover to Sandomierz were from the elite 9 GIAD led by Polkovnik Aleksandr Pokryshkin -  they sustained no losses in air combat that day. One Soviet P-39 pilot was reported missing after becoming separated from his comrades, "...who could have been downed by Hartmann. But at most Hartmann could score only one victory that day, never four...."

On 20 August 1943 Hartmann himself was shot down: according to his account (in Toliver), he dispatched two Il-2s before being hit by anti-aircraft fire. He managed to belly-land and was captured for a short period of time (later he evaded). In fact Khazanov was able to determine, that according to  Soviet records, what Hartmann attacked was a group of Shturmoviks of the 232 ShAP. One of the Il-2 pilots, Leytenat Pavel Evdokimov, saw a "Messer" jump his comrade V. Ermakov, who , firing at close range managed to put a 20-mm burst into the Bf.109, which performed a belly-landing - this was Hartmann's Bf.109 G-6. No Il-2 were lost by 232 ShAP that day, although two were damaged. Once again, Hartmann's "kills" were overclaims (even when in this case both were in good faith). And he was not downed by flak, but by Shturmovik pilot Pavel Evdokimov.

Khazanov conceeds that indeed Hartmann was a dangerous opponent, crediting him with at least two victories against Soviet aces: on 16.10.1943 he shot down the La-5 of Starshiy Leytenant Ivan Nikitovich Sytov (30 victories, 5 GIAP), and on 1.03.1945 the Yak-9 of Kapitan Sergey Ivanovich Lazarev (728 IAP, 256 IAD), but not before Lazarev shot down his the Bf.109G-14 of Hartmann's wingman G. Kapito (Lazarev's victory No.26)..."

And so on and so forth. I should also point out that Khazanov gives no indication of how or why he arrives at a final victory total of " 70 to 80 "for Hartmann..his article is simply not detailed enough and he presents evidence from Soviet archives for only a handful of dates. However his research does not appear to be motivated by 'political' considerations -he does after all praise Rall and Barkhorn.

Yet it was these two officers who persuaded Hartmann back into the Federal German Air Force post-war. Hans Ring and Jean-Yves Lorant responded to Khazanov's article in a later issue of 'Air Magazine' - both make the simple point that such 'over-claiming', if that was what Hartmann was doing, would not have been tolerated for long by Hartmann's comrades in JG 52. Nor would he have been welcomed into the Bundesluftwaffe if he was somehow 'tainted' ....

".. The 'Blond Knight of Germany' is a "hallmark of romanization", with its "insidious" title suggesting medieval chivalry that not only fails to characterize the conduct of the German Army in the East, but, indeed, marks its opposite.."


More articles on Erich Hartmann on this blog;