This Me 261 A-1a Jabo is reportedly "gelbe 3" of 3./KG(J) 54 and was found at a small airfield across the river from the town of Moosburg (NE of Munich on the Isar River). Other extant photos reveal that the lighter portions of the Karoband were originally white. They were lightly but deliberately oversprayed with 81 Braunviolet to mute to contrast with the dark blue cheques and not compromise the aircraft's overall camouflage that was also oversprayed with denser Wellen of 81. There is also evidence of the KG 54 "Totenkopfwappen" ahead of the windscreen. It too was overpainted with 81 but in this instance with a brush.

The overpainting of unit markings may well reflect the time when the remnants of Me 262 units operating in the Protectorate (KG(J) 6, KG(J) 54 and JG 7) were combined and folded into the ad hoc unit Gefechtsverband Hogeback in late April 1945.


Brown and Wadman were the first researchers to indicate that the Karobands were linked to the Kampfgeschwader (Jagd) units. This was based on photos of an Me 262 A-1a “Yellow 3+I” displaying a large style blue and white checker fuselage band ( originally interpreted as green/white) and most importantly, the famous KG 54 “Totenkopf” Geschwaderwappen.

An article by Jan Horn on KG(J) 6 indicated via pilot testimony that red and black were the colours for KG(J) 6 and blue and white for KG(J) 54 respectively. Recent photographic and crash report documents has linked an Fw 190 A-9 with KG(J) 27. The colour photo of the Bf 109 G-10 at Kaufbeuren shows it wearing a green/white band.
It is generally supposed that the various KG(J) units adopted fighter-style tactical markings, ie fuselage bands, sometime during March 1945. Since early 1944 and the deployment of Sturmstaffel 1 several units on the Western Front had been wearing colour fuselage bands for recognition purposes and it is thought that similar tail bands were adopted for Me 262 Kampfgeschwader units now operating as fighters. Interestingly - as pointed out by David E. Brown - the colours selected for the KG(J) unit’s bands shared the same dominant colour used by those fighter units that used the similar numerical designations; 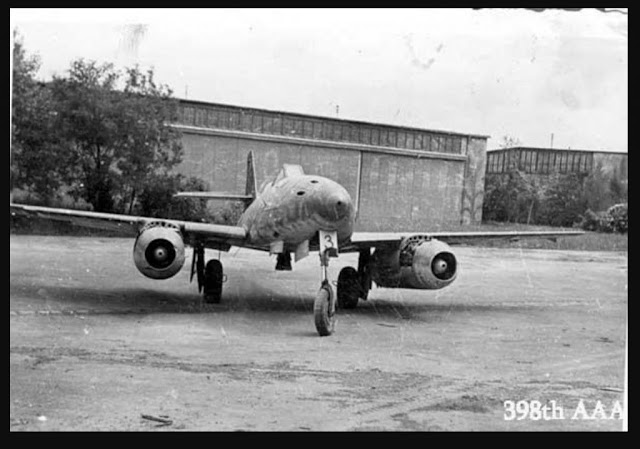 
" Those are great photos and assist with research on this machine that I believe it comes from the late 1105xx to 1106xx(ish) werknummer series.

I base this on its original underlying camouflage of RLM 81/82 uppersurfaces with a light overspray of RLM 76 over the lower half of the fuselage to create a reverse mottle effect. This is characteristic of machines from the 1105xx to 1106xx series. Over this was oversprayed a Wellen pattern of a dark colour, my guess a green shade. These machines also have the faired-in tail light that disappeared after this group to be replaced by the small bulb type. The national markings styles fit with the series too. The blue and white KG(J) 54 small style Karoband is definitive to its I. Gruppe, and is the painted over “Totenkopfwappen” on the nose exhibiting the same dimensions and position visible on other aircraft. Based on the available photographs, it is possible to see how its V-kenn. changed through time:

Who the pilot was is a mystery but definitely someone who did not want to partake in Russian hospitality when they arrived in Prague on 8/9 May.
Posted by FalkeEins at 03:06