Dan Sharp - Heinkel He 162 ('Secret Projects of The Luftwaffe')

" ...The first prototype He 162 was flown on December 6, 1944 and reached a top speed of 522 mph. The aircraft handled well except for some longitudinal stability problems. The flight ended when one of the wooden main gear doors separated from the aircraft, due to defective bonding of the plywood. Four days later, the aircraft crashed after the wooden leading edge of the right wing delaminated, killing Heinkel’s chief test pilot, Flugkapitan Gotthard Peter. The wing failure was a result of defective bonding after the Goldschmitt Tego-Film factory was bombed and an alternative bonding agent was used. As it turned out the new bonding method was too acidic causing the wooden structure to deteriorate.8 Despite the crash, the He 162 program continued. To correct longitudinal stability, Dr. Alexander Lippisch suggested adding small downward turning winglets on the wing tips. This corrected the problem and the winglets became known as Lippisch Ohren or Lippisch Ears..."  (Larry Dwyer, Aviation History Museum on-line)

"...Much has been written about Heinkel's last wartime aircraft yet in studying the wealth of surviving primary source material it became evident that certain misconceptions have become ingrained in these writings. It is my hope that this publication, fully referenced with primary sources, will offer a degree of clarity and transparency that may be relied upon.."
Dan Sharp, November 2020 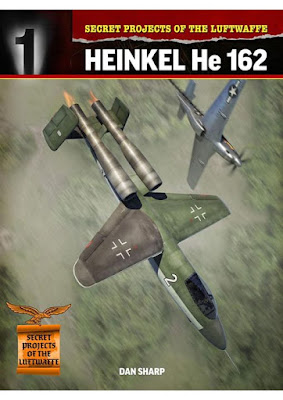 While recently perusing a 'new' compendium of Luftwaffe types that featured no references or notes  I found myself wondering how was it possible to judge what was reliable information and what was not.  A friend of mine has been saying it for a long time -the lack of proper reference listing and noting is a serious shortcoming of most aviation books! Someone who appreciates this is author Dan Sharp. According to his publisher's blurb, Dan Sharp has developed an unhealthy obsession with primary and archival sources. In a previous post on his 'Jet fighter projects' you may recall that Dan wanted to know whether anyone had written on any of the topics covered in his jet fighters book in more detail. Well, they have now - and that some-one is Dan Sharp himself. While some of the projects mentioned  in his previous book amount to a handful of drawings or notes, others are backed up in  the archives by large quantities of paperwork. So while the broad outline of what happened concerning the 'Volksjäger' competition is covered in the 'Jet Fighters' book, Dan's new 172-page He 162 book is very much a 'deep dive' into the type's development, with a new level of detail only possible using the copious primary sources available.
Dan Sharp's latest work is not a complete history of everything to do with the He 162 - it only barely touches on the production side and efforts to get the type into Luftwaffe service. Rather, it looks primarily at the design and development of the type. It is without doubt - over its 172 pages - the most detailed and accurate developmental history to the type to yet appear in print.
I've been buying books on German WW2 aircraft and on other types for a long time. When you buy and read  a lot, you notice a fair number of inconsistencies among sources- one will give one reason for the He 162 V1's crash and another will come up with a different reason. It's a pretty glaring inconsistency and it is very difficult to know what is correct and what isn't, especially when the book in question fails to give any decent references. Obviously some volumes do provide this - for example Uziel's 'Arming the Luftwaffe' is one. Even the gold standard books such as Classic Publications don't usually tell you where the documents are to be found though.
One area of inconsistency that Sharp highlights in relation to the He 162 concerns the 45-degree wing end caps, commonly referred to as 'Lippisch ears'. There is a single flight test report where the pilot refers to them simply as 'ears'. Someone has presumably taken this and spun it into 'Lippisch ears'. That's not to say that Lippisch didn't develop them - he did. According to the new timeline in the He 162 developmental history that Dan Sharp has written, Lippisch wrote to Heinkel technical director Carl Francke offering his sympathies following the crash of the He 162 V1 on Dec 10, 1944, and offering to help, if he could. Francke wrote back to say that he would welcome Lippisch's input and offering to show him the aircraft in person as soon as possible. The earliest (and only known) blueprint drawing of the new 'end cap' is dated January 6, 1945 (and also Jan 9). The 'end cap' is then flight tested later in January - and is found to successfully cancel out the longitudinal instability which caused the V1 to crash. Incidentally, the longitudinal instability was caused by the wings' 3-degrees of dihedral (according to Heinkel). A permanent solution of reducing the dihedral to 1-degree - negating the need for the end caps - was planned but never implemented. The bigger problem was lateral instability, the curing of which required the fuselage fuel tank to be significantly reduced in size (as the fuel drained, it altered the aircraft's centre of gravity mid-flight, causing pitch-up/pitch-down movements that were nearly uncontrollable), the tailplanes to be lengthened, different ballast weights to be tried in the nose etc. etc.
This in a nutshell is very much the motive behind Dan Sharp's research efforts - a return to the source documents. As well as attempting to clarify the timeline, Dan Sharp also provides a more accurate analysis of the He 162 prototypes, what variants of the aircraft were proposed and what decisions were made about them. Richard A. Franks' 'The Heinkel He 162 - A Detailed Guide to the Luftwaffe's Volksjaeger' tries to do a similar job - it is essentially a list of the different prototypes and what their features are supposed to have been. Many of Franks' listings are carefully 'corrected' in this new work, citing the source of the correct information so that, should anyone wish, they can check it themselves.
To this end  I found the seven pages of footnotes slightly more edifying this time than I did the pages of footnotes in Dan Sharp's previous book on the BV 155 - since most of them nicely expand on what is written in the main text rather than just being document references.
Dan Sharp neatly sums up the He 162 project - while it has become axiomatic that the He 162 was symptomatic of the desperation that beset late-war German aeronautical developments, the machine was probably the 'perfect' aircraft from a number of stand-points for the resource-constrained late-war German economy - ease of construction, cheap to build, utilising a single-jet with wooden wings - operating perfectly well on cheap, unrefined fuel - that conferred decent performance not far removed from that of the far more expensive, resource and labour-intensive Me 262.
Recommended! For readers in the UK this publication is available from WH Smiths.