To mark the 80th anniversary of the Battle of Britain, Osprey has just published a voluminous book of some 400 pages on the 'Few'. The work of Doug Dildy (veteran F-15 pilot) and Paul Crickmore (SR-71 specialist), it is a curious mixture of texts. There is evidence of some decent research but also plenty of remarks that seem to come straight out of the 1960s or even earlier. The 'scene-setting' two pages on AH's life and political career are hardly necessary for anyone vaguely informed about WWII. A similar length assessment of the Me 109 as 'short-range front-line interceptor' and the contradictions inherent in the strategic bomber escort role is rather more interesting and on point. In the chapter on the Phoney War, the authors reduce the French Air Force to 'an unequal assortment ranging from the obsolete MS 406 to the modern H-75'. To 'make up for this deficiency', the RAF deployed the optimistically named 'Advanced Air Striking Force' to the Continent.  However, it is questionable whether the Gladiator, Battle and Blenheim were better than the 'old French cuckoo clocks'. The authors add that 'no squadron of modern Spitfires could be diverted to France', and there is thus no discussion of the refusal of the British authorities to commit a fighter reserved for the defence of Great Britain alone. During the campaign in the West anything between 650 and 1,000 Luftwaffe aircraft were lost. Losses on the opening day of the invasion –May 10 – exceeded the biggest daily loss during the fighting over England later that summer. Included in the total losses were around 165 Bf 109s shot down and a further 50 or so lost in accidents. Messerschmitt Regensburg was only producing around 25 new Bf 109s per month during this period. Even today some French authors maintain that the French ‘contribution’ to victory in the Battle of Britain was decisive. Dildy and Crickmore do not. 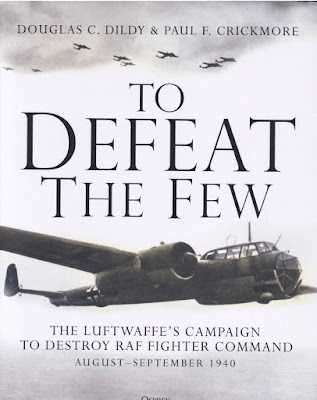 Inconsistencies and contradictions in their text are readily apparent - much like the German 'strategy' (or lack of it) for the assault on England itself.  For a start there was no clear German plan to destroy the RAF - aside from enticing the RAF up to fight, where they would 'naturally' be shot down. Post-war the always overly optimistic Kesselring wrote in his memoirs; "Our difficulty was not to bring down enemy fighters - in Galland, Molders, Oesau, Balthasar etc., we had real aces, while the huge figures of aircraft shot down are further proof - but to get the enemy to fight." Essentially, the German plan was dependent on the British committing large numbers of fighters to large air battles, allowing themselves to be bounced and shot down by the Luftwaffe's aces in their Bf 109s. Unsurprisingly, the RAF did not oblige. And the change in Luftwaffe strategy - large bomber formations requiring close escort - made fighter vs. fighter combat less likely and negated the major advantage -speed- held by the Me 109.

Whereas various 'directives' set out at the start of the Battle sought to cut Britain off from the rest of the world through attacks on shipping and ports, the UK's southern ports were soon excluded from target lists as they would be required for invasion. In Chapter IV (p.85), the authors cite the impossibility of a German landing on English coasts because of the power of the Royal Navy, which a Luftwaffe (barely six years old) could not hope to destroy or even neutralize for lack of resources. At least one commander - JG 51's Theo Osterkamp- calculated that in order to protect the invasion beaches he would need two complete Geschwader (almost 150 aircraft) over the beach head at all times. The total amount of aircraft required for such an operation was more than the Luftwaffe started the Battle with, implying zero net losses.   At a meeting convened by Goering at the Hague on August 1, the different Luftwaffe commands put forward their various and disparate plans. Bungay has described the results of this meeting as 'a confusion of banalities' - there was no 'unified' planning process and all sorts of targets - the ports, the merchant navy, infrastructure, factories - were determined and then dropped or modified.

Once again in a text on the Battle there is no discussion of the role ‘ULTRA’ played in the ‘early warning system’. ULTRA intelligence was used in the form of briefs to relevant commands. Such 'briefs' must have come into their own  in early September with the major Luftwaffe strike operations which evidently required a certain amount of pre-planning coordination and thus communications and which ultimately played right into the hands of the British. While never identified as ULTRA as such - it was 'a reliable source' or some similar wording- it did provide tactically useful intelligence on impending raids and significantly did reveal German intentions. The 'Battle of Britain Then and Now' includes some examples of these briefs. Nor do the authors discuss in any depth the German's lack of knowledge of the Chain Home defence  - not only could CH detect an incoming raid but it could also vector an interception. With their limited resources the Luftwaffe should have been used, to quote Sebastien Cox, " first, to destroy the Chain Home radar towers, a simple task because only nine, all flimsy and highly conspicuous, guarded the coast between Southampton and Dover. The blinded RAF fighter airfields should then have been overwhelmed by round-the-clock bombing..."
. This was indeed attempted to a certain degree - on August 18, Ju 87s attacked RADAR and airfield targets and 15 were lost. That brought Ju 87 losses to 59 lost and 33 damaged. The RADAR station (Poling) attacked was severely damaged and the Chain Home RADAR was out of action until the end of August, but the Chain Home Low system was not and with this redundancy built into the system Luftwaffe losses would reach unmanageable proportions in putting it out of commission.

The authors conclusion is classic 'Mason' -  'by preventing the invasion, the 'Few' enabled Britain to continue the struggle'. Sound the trumpets, bang the drums!  In short, a dense - and often confusing - work, which sometimes gives the impression of any number of texts from the '60s, an era when there was no publicly available information about ULTRA, but where radar was the 'revolutionary invention that saved freedom'. There is little or anything 'new' here. The book is ultimately a hefty compilation of 'old' news into which the authors have thrown just about everything that might seem relevant in order to make an impression.
Posted by FalkeEins at 12:49