A selection of early JG 2 Fw 190s. For the text that follows I've relied heavily on Erik Mombeek's superlative " In the skies of France " Vol 3. (French text only).


III./ JG 2 took delivery of its first Fw 190s during May 1942, a month later than Greisert's II./ JG 2 and following a visit to Beaumont by the C-in-C of Luftflotte 3 GFM Hugo Sperrle. The first three images below show a Fw 190 A-2/3 'gelbe 2'. My first thought was that this could be "Sepp" Wurmheller's although I have to thank George Morrison for a more positive identification - too few Abschussbalken. This 'yellow 2' was most probably the regular machine assigned to Ofw. Karl Nowak and shows some ten rudder victory markings. His Warte would add just two more - his 11th and 12th returned on 3 June 1942- before he was shot down and killed by Spitfires over the Channel on 10 June 1942. The stylised eagle's head design was of course a feature of 9./ JG 2 machines. Wurmheller flew with 5./JG 53, then the Stab JG 2 (still using 109 Fs), then 1./JG 2. He flew several "weisse 3" before choosing "gelbe 2" in 9./JG 2. 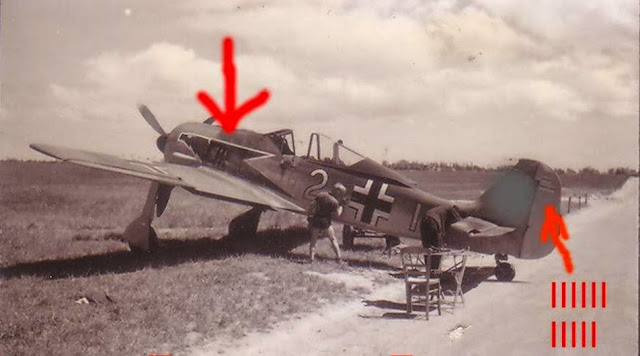 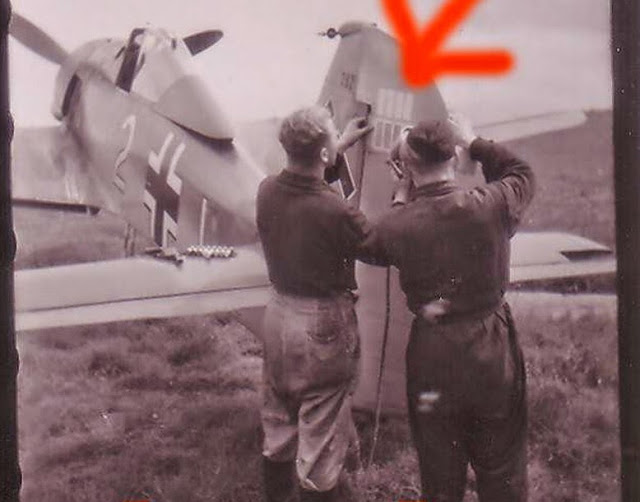 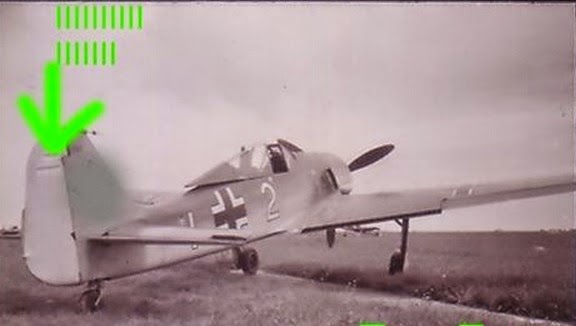 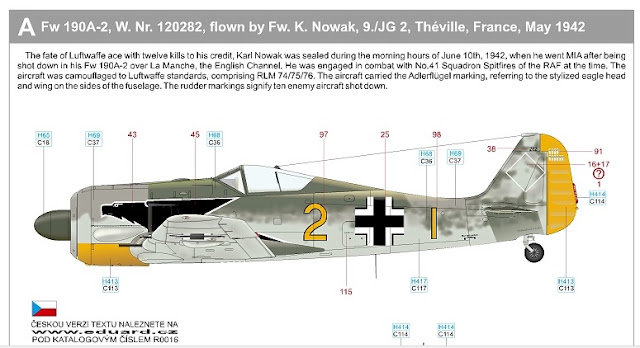 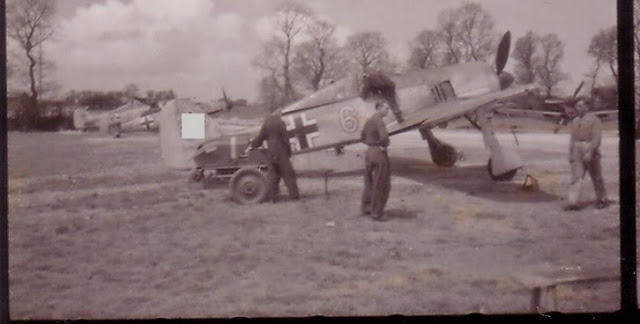 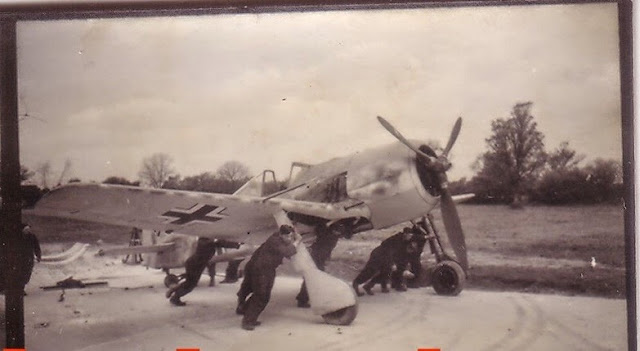 Below; well-known PK- Foto of the machine assigned to the Kommandeur Hptm Hans Hahn - Fw 190 A-2 (WNr. 223). This was a Focke Wulf aircraft constructed in the spring of 1942 and delivered to the Stab III./ JG 2. According to Peter Rodeike's caption commentary ("Jagdflugzeug 190" page 68) the upper surfaces  may have received a partial overspray with a "dunkelgrünen Farbton". Note though the much better quality reproduction below and in the Mombeek/Roba volume 'Dans le Ciel de France'. The aircraft is wearing the small white fuselage band commonly seen on Stabsmaschinen of III./ JG 2. The yellow rudder displays 61 victory Balken, Hahn claiming two Spitfires around midday on 6 May 1942 for his 60th and 61st. Scrambling from Théville to head off Circus no. 159 (Bostons to Caen) the Fw 190s of III./ JG 2 tangled with Spitfires over the French coast north of Fécamp 'chasing' the RAF fighters back across the Channel;

" it was a magnificent warm day, not a cloud in the sky and no wind. From out in the middle of the Channel you could see the two coastlines and visibility was such that I could see the Isle of Wight and the English coastline all the way to Dover..."  (Lt. 'Poldi' Wenger 3./ JG 2) 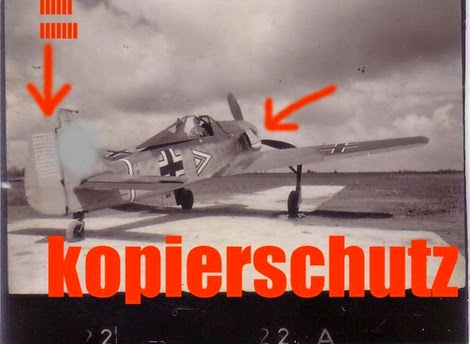 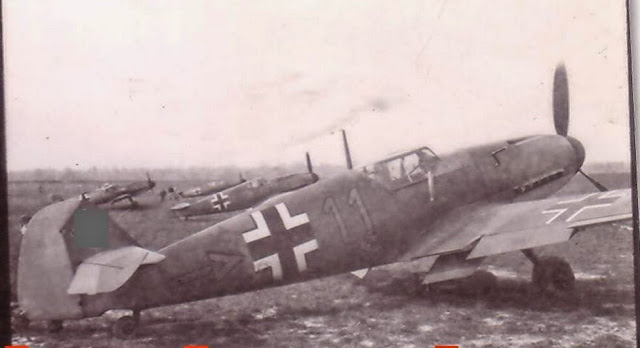 Above; possibly a scene from Beaumont-le-Roger where the Friedrichs of 1./ JG 2 operated alongside the Geschwaderstab.

Below; Fw 190 A-2 "white 11' of 7./ JG 2 (WNr. 105) features the Staffel Zylinderhut emblem on the nose (a thumb pressing down on the British top hat)  rather than the III. Gruppe cockerel's head. After only a few hours flight time the exhaust has already stained the lower forward fuselage and this area of the airframe would soon be over-painted with the usual black trapezoidal eagle wing or Adlerflügel shape outlined with a white border. Probably assigned to Ofw. Alfred Knies, the preferred wingman of Stk. Egon Mayer. (cf. Mombeek "Dans le ciel de France " - Vol 3.) Knies claimed a Spitfire shot down on 6 June 1942.

Above; Fw 190 A-2/3 "gelbe 11" (probably WNr. 2187) of 9./ JG 2 features the stylised eagle wing with an Adlerkopf (eagle's head) on the cowling. Note the small bulge on the gun cowling, a feature of Arado-built Fw 190s. "Yellow 11" was the usual aircraft of Ofw. Fritz Hartmann - the rudder featured at least eight Abschussbalken by the time Hartmann handed the machine over to 8. Staffel later that year where his victory markings were removed. See photos on p176 in Erik Mombeek's superlative " In the skies of France " (Vol 3) 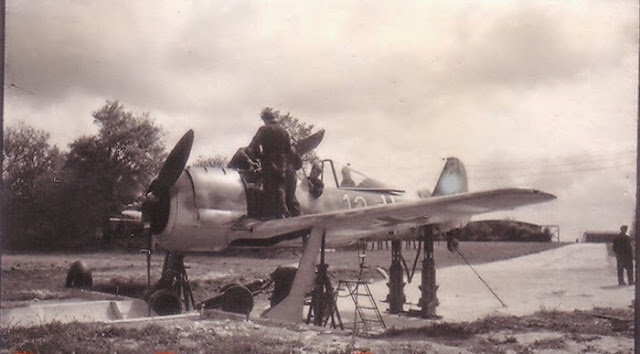 "... on one of my first sorties from Théville with 7./ JG 2 on 3 June 1942 we ran into a formation of about ten Spitfires and shot them all down - our Focke Wulfs are largely superior to their machines. I flew as Lt. Augustin's wingman but really saw very little of the action, so close did I stick to my leader's rudder. After we landed I was somewhat surprised to learn that we had accounted for so many enemy machines. Of course as a relative beginner I had little appreciation of the bigger picture..."  ( 'In the skies of France' -Vol 3) 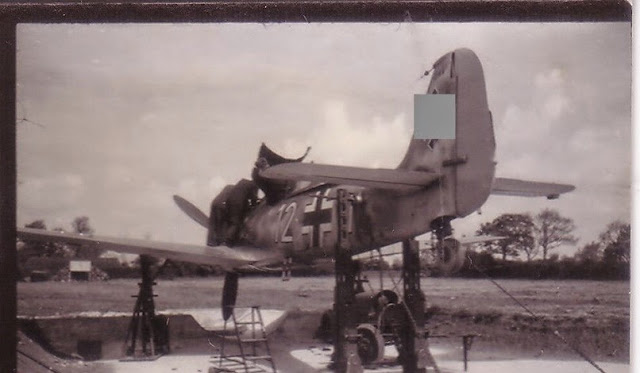 Offered on Ebay via solo-fotos here

another small Luftwaffe blog article that looks a little more critically at over-claiming in JG 2 during 1941
http://falkeeins.blogspot.co.uk/2011/06/luftwaffe-fighter-ace-claims-and.html
Posted by FalkeEins at 03:05