Below; seen during the Norwegian campaign -possibly after landing Gebirgsjäger (mountain troops) for operations around Narvik- the photo below probably shows the Do 26 V-1, coded P5+AH. For the invasion of Denmark and Norway, launched on 9 April 1940,  the five Do 26 seaplanes (V-1 to V-5) were brought together in the so-called Transozeanstaffel incorporated in 9./KGzbV 108. Among the pilots flying these machines were the 'cream' of the Lufthansa fleet : Rudolf « Miesi » Mayr, the Graf Schack von Wittenau, and later night fighter ace Ernst-Wilhelm Modrow among others. The Staffel was tasked with transporting troops, munitions and mail with particular responsibility for re-supplying the Narvik area which saw hard fighting between the Allies and  General Eduard Dietl's Gebirgsjäger. 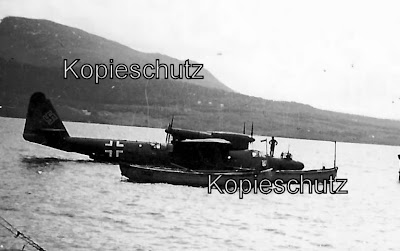 This particular aircraft was shot up by Hurricanes of N° 46 Sq. in the Rombaksfjord on 28 May 1940, an attack in which the pilot Fw. Ernst-Wilhelm Modrow was wounded. It may well be Modrow standing on the nose of the aircraft in the photo above. Note the emblem of the Transozeanstaffel under the cockpit. After convalescence Modrow became an instructor but during April 1942 he flew the first of over one hundred sorties at the controls of a BV 222. During 1943 he was on the flight roster at the Travemünde test centre before joining the Nachtjagd. He was quickly promoted to Kapitän of 1./NJG 1 and ended the war with 34 confirmed victories.

" during the Norwegian campaign we flew an almost constant round of sorties bringing in anti-tank guns, munitions, mines and mountain troops for Narvik. These flights were combined with reconnaissance along the Norwegian coast. The more perilous moments of any such sortie were the landings on the narrow fjords around Narvik  and the subsequent takeoffs. We skirted along neutral Swedish airspace to avoid anti-aircraft fire before diving down almost vertically  - almost helicopter-like- for the surface of the water with our engines throttled back. The aircraft had to be rapidly unloaded, but it was amazing what could be achieved with the threat of death so close - we expected naval or artillery fire to come crashing down around us at any moment. Two tons of equipment could be off-loaded under such circumstances  - with much sweat and cursing - in under twenty minutes. Takeoffs were just as 'suicidal'  especially in the narrow Beisfjord with its high cliffs. Taxiing out into the middle of the fjord was often done under fire from British ships. Our takeoff runs had to be finely judged in order to avoid the cliffs. Engines were run up to full power and we were lucky if we managed to pass more than ten metres over the these obstacles. Each successful takeoff under such circumstances represented a considerable feat of airmanship for such a large and heavy seaplane weighing up to twenty tons ".

Below; pilots of Nahaufklärungsgruppe 13 probably at St. Brieuc, France celebrating a milestone 500th mission during 1943. Note the Gruppe emblem on the distinctively marked cowling of these Fw 190A-4/U4s fitted with Rb12,5/7x9 cameras 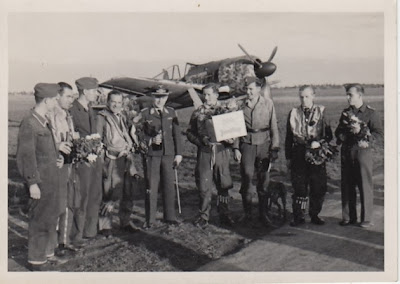 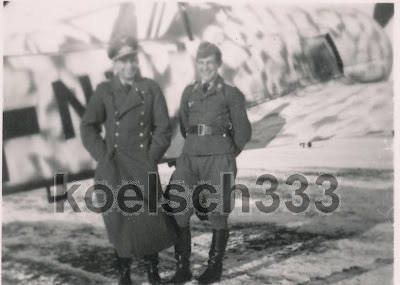 Photo courtesy of Marco at koelsch333 ebay.de sales and currently on offer here