...Operation Sunrise was a large daylight raid mounted on 24 July 1941 against the German battle cruisers Prinz Eugen, Scharnhorst and Gneisenau holed up in the port of Brest. 'Sunrise I and II" - 'II' being the diversion - was flown by more than one hundred RAF medium and heavy bombers -  including Stirlings, Halifaxes..and three B-17 Flying Fortresses. Chris Goss has just published an excellent article detailing the events leading up to and including the 24 July 1941 raid entitled 'Neutralise the threat' which appears in the current issue of 'Britain at War' magazine. 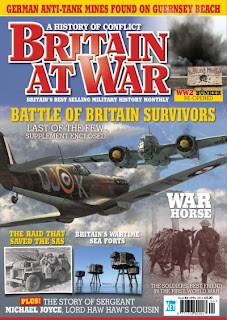 Given the focus of 'Britain at War' Chris does not include any accounts from JG 2 pilots who countered the raid, although he does publish some interesting photos. 24 July 1941 was a significant day in the career of the Staffelführer 3./JG 2 Lt. Julius Meimberg - by his own account three bombers shot down and a crash landing that resulted in serious injuries that would keep him out of combat for the rest of the year.

While Goss states in one of his photo captions that Meimberg was shot down - presumably by the bombers' defensive fire - Meimberg's own account merely refers to running out of fuel. He had been performing an air test when he had simply run into the RAF raid ...

" ...In the early afternoon the chief engineer (Oberwerksmeister) reported that my Bf 109 E-7 'yellow 1' was serviceable and suggested that I take it up for an air test. So I took off alone. The visibility was perfect. With the sun beating down on my canopy, temperatures rose rapidly in the cockpit and I climbed for altitude in search of cooler conditions.."

Banking in the direction of Brest, Meimberg could clearly see the silhouette of the Prinz Eugen in the port. The Gneisenau, on the other hand, was lying in a huge dry dock. They looked extremely vulnerable. Meimberg then flew a wide curving turn to the north-west and caught sight of a series of black dots moving to the south at between 4,000 and 5,000 metres altitude.

" Bomber ! They looked like swarms of insects, there was no doubt, however, they were bombers and there were several dozen of them ! I struggled to remain calm. I quartered the sky looking for the escort. However I see no sign of condensation trails that might betray any fighters - not a single Spitfire. As the bombers were flying into the sun, it was likely that I had not yet been seen. I called up our Gefechtsstand and told them the number, the altitude and the heading of the intruders. The first enemy aircraft passed below me at that moment...."

Meimberg feverishly switched on his sight and armed his MGs and dove down to come in behind a Handley-Page Hampden bomber.

" ..A long burst of fire ripped into his engines. He started to go down. I climbed back to altitude. After about ten minutes, I spotted another group of Hampdens and came down behind one of them. It wasn't long before he was joining my first victim. I again got back up sun in an 'ambush' position and, after a similar period, spotted my target: a Vickers Wellington. I came in from astern at full speed and opened fire, exhausting my last ammunition. It went straight down and crashed not giving any of its occupants a chance to escape. My third victory of the day! At that moment, the red low fuel warning light started flashing on the instrument panel. I'd been airborne for more than an hour and it was high time to land. Suddenly, while still a long way from Guipavas, my engine coughed and sputtered and then stopped abruptly..".

With his prop turned to fine pitch and still windmilling in the slipstream, the Staffelführer 3./JG 2 desperately sought out a landing strip before lining up on an open field in the vicinity of  Brélès. In the ensuing forced landing Meimberg's Bf 109 E -7 " yellow 1 ", displaying 10 victory bars, was brought to a stand after careening into a hedge and low wall. Severely damaged, the aircraft would be a write-off. In the photos taken immediately after the crash  Meimberg is prostrate on the ground, swathed in bandages, while German personnel and local civilians can be seen  attempting to protect the injured pilot from the heat of the sun’s rays with an umbrella. Meimberg would not rejoin his unit until spring 1942.

RAF losses during 'Sunrise' were considerable and the German ships relatively unscathed -  although the large bomber force was escorted by equally large numbers of fighters, the bombers could only be escorted part of the way due to the distances involved. I./JG 2 claimed some 25 RAF bombers shot down. Also successful were pilots of the Bf 109s of the Erg.Jagd training Staffel. Ofw. Franz Gawlik of this unit claimed a Halifax. The diversionary Circus mounted over northern France had failed to draw the Luftwaffe fighters north. 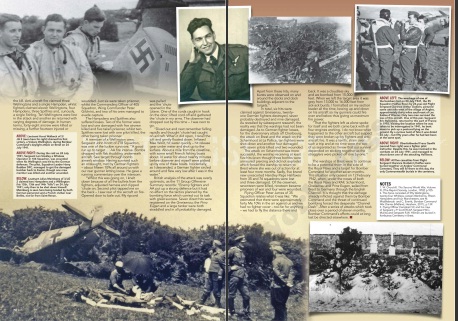