The last flight of Lt. Paul Kaschuba and 'Black 13' - the story behind the photo (Me 410 II./ZG 26 Flak 43) Zerstörer defending the Reich, Reichsverteidigung 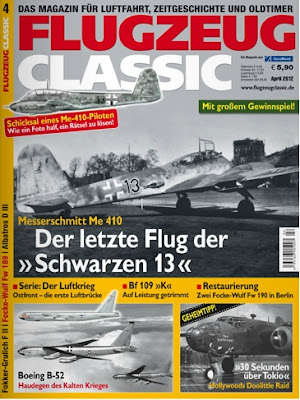 Recent issues of Flugzeug Classic magazine have been packed with Luftwaffe features, photos and artwork and are highly recommended to readers of the Luftwaffe blog. The April issue (No 4, 2012) has a fascinating piece compiled by Gerhard Kaschuba, nephew of Lt. Paul Kaschuba, who attempts a reconstruction of his Uncle's last flight on 12 May 1944 at the controls of Me 410 W.Nr 10241 'Black 13' of II./ ZG 26  - Kaschuba was shot down in the vicinity of Plauen during an attack against US 8th AF bombers. Gerhard Kaschuba believes that this well-known photo taken from the 388th BG B-17 'Lady Godiva' during the raid depicts 'Black 13' on 12 May 1944, the date the aircraft and its pilot were lost.
1st Lt. Manuel Head, pilot of 562nd BS B-17 'Lady Godiva' reported; " As I recall the 388th BG was attacked from the rear - I saw nothing of the combat with the exception of this Me 410 peeling away just off my starboard wing. I well remember my exclamation, 'what the hell is he doing here?!' and in a fraction of a second he was gone. Victor Labruno took the pic from the right hand window of the radio compartment. Eugene Crossin in the upper turret told me later that his tracers poured into the belly of the Me 410 and a 'kill' was subsequently credited  to him .."

(Close-up view of 'black 13' from the larger photo courtesy of Peter Kassak for the Luftwaffe blog..) 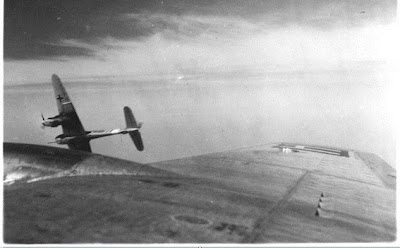 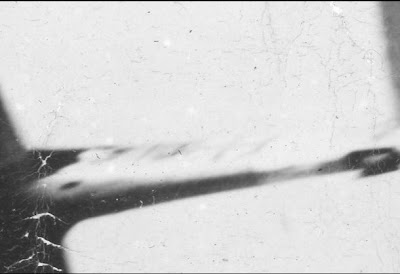 Up to April 1944 this aircraft (pic above via Eddie Nielinger-Creek ) was flown under operational conditions by Erprobungskommando 25 under Hptm. Horst Geyer. The aircraft - originally built as a Me 210 during August 1943 in Augsburg - mounted a Flak 43 (3.7 cm)  heavy cannon in the nose and was fitted with a ZFR  (Zielfernrohr) telescopic sight. Lt. Paul Kaschuba joined the Zerstörerstaffel of Erprobungskommando 25 on 2 May 1943 and between May 1943 and January 1944 flew at least 25 operational combat sorties with this unit, receiving the Frontflugspange in Bronze  - 25 flights being the requirement for the bronze fighter pilot's combat clasp, awarded to Kaschuba on 19 January 1944. Unfortunately the pilot's Flugbuch has not survived although author Kaschuba has attempted to reconstruct some of the detail of  his Uncle's brief combat career.

On 8 October 1943 Paul Kaschuba claimed a 2nd Bomb Division B-24 shot down for which he received the EK II and on 10 October 1943 was himself shot down during the raid on Münster while flying a Bf 110. During early 1944 he was assigned to fly the Flak 43-equipped Me 410. Ground and air firing tests of the heavy cannon were carried out at Erprobungsstelle Travemünde and in April 1944 two Flak 43-equipped Me 410s were assigned from the Ekdo. 25 to II./ ZG 26 at Königsberg/Neumark along with the crew of Lt. Paul Kaschuba and Fw. Karl Bredemeier. During this period the Me 410s of II./ ZG 26 were equipped with the BK 5 heavy cannon as seen in the photos here. 12 May 1944, -the first day of an all-out American air offensive against German oil and synthetic fuel production plants and installations - would be Paul Kaschuba's first and last sortie with II./ZG 26. Author Gerhard Kaschuba tracked down some of the Me 410 crews that flew on this mission and relates their accounts. Crew members interviewed include Fritz Buchholz, Walter Fritz and Richard Wilde of 6. Staffel ZG 26- a brief extract from the rare personal recollections of one of these veterans drawn from Gerhard Kaschuba's feature follows ;

Richard Wilde; " the Kommandeur Hptm. Günther Weyl brought us in behind the B-17s on a wide curving right-hand turn with a slight height advantage allowing for accurate firing. During our closing approach my right neighbour caught fire and peeled away with a half-roll. I managed seven or eight firing rounds with the heavy cannon with no problems. Even the smaller cannon worked well that day. I could see the impacts of my firing on the right inboard engine of the B-17 I was attacking but I took numerous hits as we closed in. I could hear the impacts and see their effects on the port wing. My radio operator Karl Lapsie reported that very hot oil was coming into his compartment, burning his legs. As I continued my attack oily smoke started to fill the cabin and when I unleashed my last cannon shell, flames erupted in the cockpit. We were right  alongside the B-17's huge tail fin when I rolled the aircraft away to port, jettisoning the canopy at the same time.." 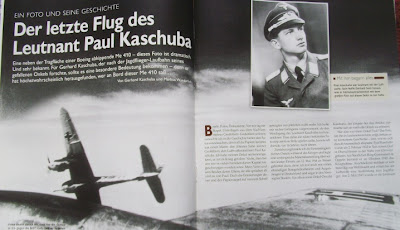