A 'new' view of Hartmann's last Erla-built Bf 109 G-10.  These are photos of the actual images seen in an album and are thus slightly 'murky'. I've enlarged them as far as I can without losing the 'quality'. The second image is 'well known' and was taken directly after the sortie resulting in Hartmann's 350th 'claim'. Not that he would have filed this or any of the preceding fifty or so claims anyway. Enthusiasts still maintain he achieved '352 confirmed victories'  - which is nonsense, given that we know for a fact that he only officially filed some 280! Note the camouflage tunic worn in the air over the front to facilitate evasion should the pilot come down behind enemy lines. The second image is new to me and shows a little more of the aircraft and confirms that it had the black "tulip" on the nose.

The last known Hartmann machine we have any evidence for is the well-known photo of him, supposedly taken in mid-April '45, standing by his Erla-built Bf 109 G-10 machine below. Note the rectangular plate ahead of the cockpit. This photo was apparently taken on the occasion of his 350th Abschuß. A more recently discovered image (below) shows a little more than the red heart and part of the Gruppenkommandeur's Doppel-winkel-  this G-10 apparently features the tulip marking.  This variant was also the "hottest" Bf 109 then available, so no surprise Hartmann flew one and that it was in fact most likely to have been Hartmann's last aircraft.. 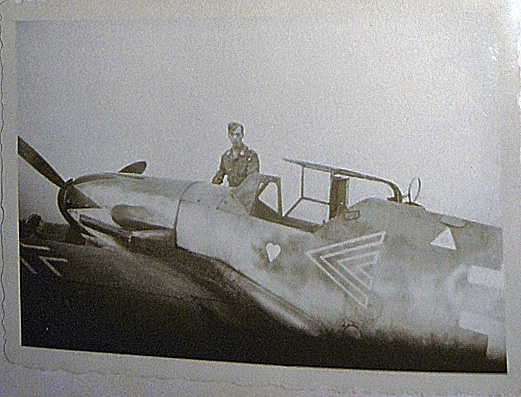 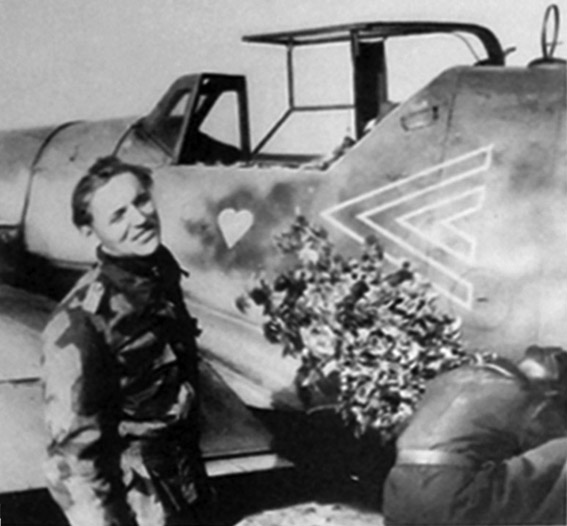 Did Hartmann fly a K-4 as some suggest...? Playing devils advocate here - there is photographic evidence ( see JG 52 in Deutsche Brod from Japo) indicating that the Stab JG 52 had Bf 109 K-4s with tulip designs & that as Hartmann's I./JG 52 shared a field with them the chances are he might well have flown one. According to Michael Ullmann then "there are strong grounds to indicate that Hartmann's last machine was a Bf 109 K-4". However the only 'fact' Ullmann cites in support is rather nebulous; high ranking & highly decorated pilots invariably received the latest equipment in an effort to maintain an advantage over their adversaries- rather over-looking the fact that the K-4 was proposed as an up-dated fighter-bomber variant. No matter either that the chaotic conditions in German manufacturing in early 1945 meant that machines were leaving 'factories' with little or no quality control being exercised - there is an account in the JG 300 history from a Bf 109 pilot ferrying K-4's minus instruments, oxygen etc etc. Ullmann 'suggests' Hartmann flew a K-4 (with tulip) in the last WNr batch 334xxx/335xxx which would have been finished in 75/83 with an 82/83 tail unit.... 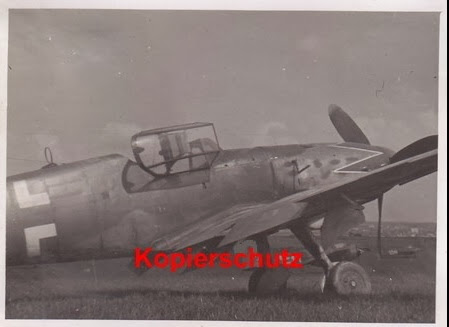 I've had this discussion with both Barbas and Lorant who both interviewed Hartmann and studied his surviving log book; the last of Hartmann's machines we actually know anything about was a Bf 109 G-10. Incidentally the highest score seen/photographed on any of Hartmann's (known) rudders was 121 - the idea that his rudder displayed 352 victory markings simply beggars belief!..Would the ground crew on the last day of the war have taken the time to paint the 352nd Balken on the rudder  and then set fire to the machine! Pure fiction. But this was picked up by every subsequent book and decal maker as fact, a myth still pedalled on the net today..


Another rarely seen machine flown by Hartmann, Bf 109 G-6 W.Nr. 44. ... "Gelbe 2", 9./JG 52, Csòr, Autumn 1944 (??). Note the yellow V marking under the wing as used by Luftflotte 4 - ordered on September 21, 1944, so the photo dates from after that. The camouflage looks more like a WNF aircraft and the aircraft has a retrofitted Erla canopy as proven by the frame and antenna mast on the rear bulkhead. 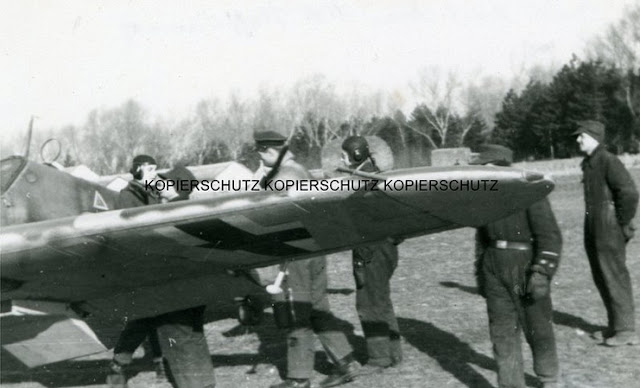 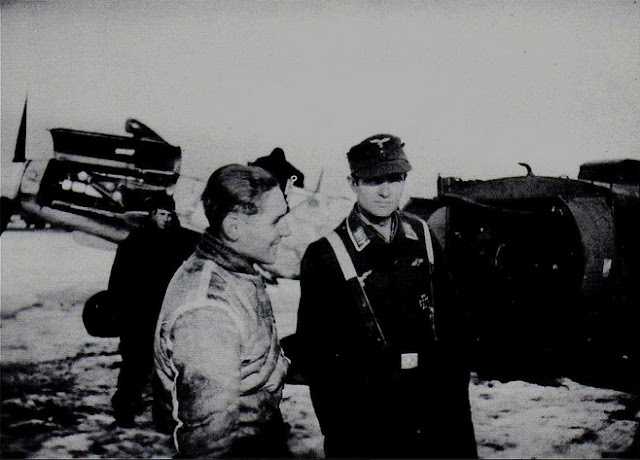 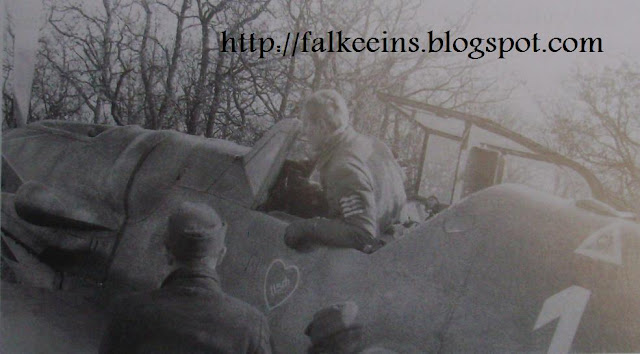 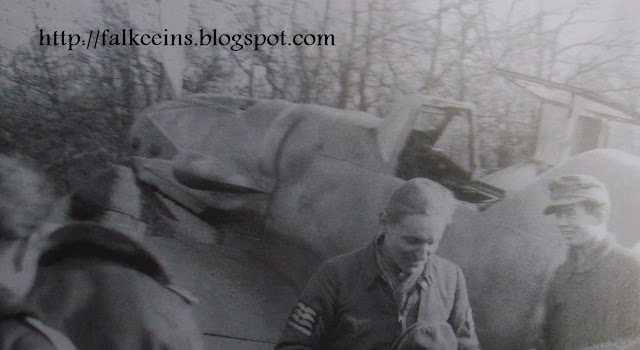 Lastly, a link to some superlative artwork from Anders Hjortsberg based on these latest photo discoveries
http://theprofilepaintshop.blogspot.com/search/label/JG52

Below; neat view of Hartmann's 9./JG 52 G-6 "Yellow 1" with the small '2' indicating -maybe -that this was a replacement machine. It may also simply be a reference to his first 'white 2' - in the style of Barkhorn's figure '5' inside his Kommandeur chevrons. Filmed on or around about the time of his 300th victory. More film stills of this machine on this blog here 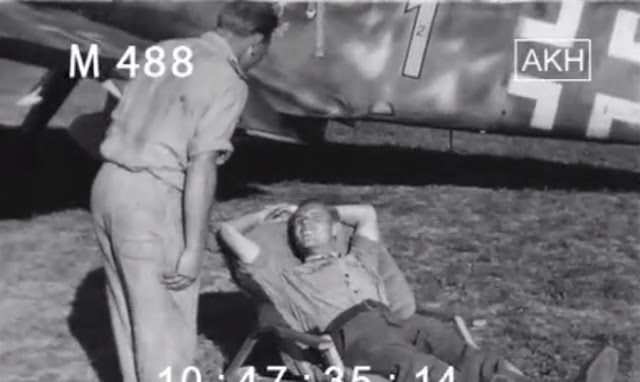