Klaus Deumling and the sinking of the Roma (KG 100 Wiking, Dornier Do 217 and Fritz X in Flugzeug Classic magazine January 2011 issue) 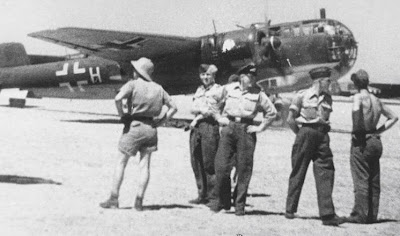 In early September 1943 the Italians proclaimed an armistice with the western Allies. One of the armistice clauses called for "the immediate transfer of the Italian fleet and the Italian airplanes to those places that will be designated by the Allied Command ". On 9 September 1943 - the same day as the Allied landings at Salerno - an Italian Navy battlegroup, under the command of Admiral Carlo Bergamini, heading for Malta to 'surrender' was attacked in the waters of the Gulf of Asinara by Luftwaffe bombers of KG 100. During the attack, the Roma, one of the most powerful warships then at sea in the Mediterranean was struck, split in two and sunk. The Admiral, along with a great number of officers, petty officers and sailors perished – more than 1,250 men.


Nineteen years old Leutnant Klaus Deumling of 7./KG 100 was flying his first combat sortie that day at the controls of a Dornier Do 217 K and participated in the sinking of the Roma, launching a radio-guided Fritz X flying bomb. His story is related by Peter Cronauer in the current issue of Flugzeug Classic magazine (January 2011) - although unfortunately not entirely in his own words.  According to Cronauer it  was not until Deumling related his account of the attack on the Roma in his memoir '41 Sekunden bis zum Einschlag' (41 seconds to impact - the 'flight' time of the Fritz X) that his participation in the action against the Italian fleet and indeed the full facts of this attack became more widely known. Postwar Deumling had little contact with flying or former members of KG 100. At the end of that day - an Italian battleship sunk and over 1,200 Italian lives lost, just days before hand allies of the Germans - there would be no decorations for Deumling or his fellow KG 100 crews. Ulf Balke in his history of KG 100 credits Kommandeur Jope and Ofw. Kurt Steinborn as being the successful crews in the sinking of the Roma. Deumling's view of this action differs somewhat. 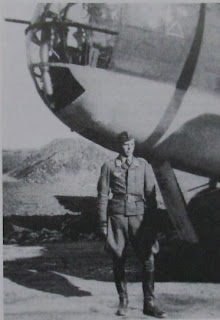 Klaus Deumling (right, below) had been posted to 7./KG 100 in Schwäbisch-Hall Hessenthal after achieving his instrument rating at the Luftwaffe's blind flying school in Belgrade during the early summer of 1943. Here he not only met his new crew for the first time - all of whom were older than Deumling- but encountered a new aircraft type, the Dornier Do 217 K-2 and one of the Luftwaffe's first 'Wunderwaffen', the Fritz X ‘stand-off ’ bomb.

The Fritz X or FX-1400 bomb (or more accurately after its manaufacturer, the Ruhrstahl X-1) had been designed in 1939 by Dr. Max Kramer and was a high penetration 1400 kg bomb, a development of the PC 1400 bomb, now equipped with four small wings or ‘spoilers’ and tail controls for stabilising and modifying its trajectory in flight. It was a weapon that was remotely controlled from the launch aircraft by the FuG 203/230 Kehl-Strassburg very short-wave radio system comprising four frequencies which relayed commands to dive, pull up and manoeuvre left and right via a small control stick operated by the Dornier’s observer. These ‘commands’ translated into movements of the ‘spoilers’ via small servo motors. The radio-commands could be sent up to 15 seconds from the point of launch which partly accounts for the very high launch altitudes of the bomb. Unlike the Hs 293 it did not have any means of propulsion. It was however extremely precise and could thus be launched well out of the range of enemy anti-aircraft fire, taking 41 seconds to reach and penetrate a pinpoint target of only some 5 square metres at its terminal velocity approaching 1,000 km/h from a launch altitude of 7,000 metres. It was both its speed and its armoured casing that enabled it to penetrate the steel plate of some of the biggest capital ships then afloat. It did however require a stable launch platform and clear conditions in order for the observer to guide the weapon onto its target. 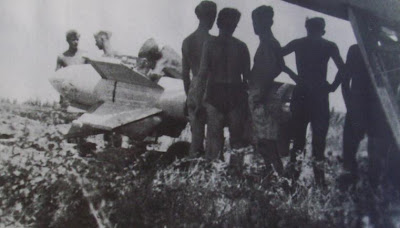 Preparing a Fritz X bomb for loading onto the carrier aircraft


While in northern Germany Deumling and his crew trained hard over a period of two months on launching the Fritz X against a 5,000 ton target ship anchored off Peenemünde. They then moved to Istres, near Marseille on the Côte d’Azur for the attack on the Roma. With the major elements of the Italian Navy in La Spezia awaiting confirmation of orders to sail for Malta, Kommandeur Jope had already received top secret instructions from Luftflotte 2 chiefs in Rome to prepare for an attack should the Italians set sail. Shortly before 14:00 on 9 September 1943 individual Do 217s in a first ‘wave’ rolled out to the runway at Istres.

“ it was Gruppenkommandeur Jope himself who briefed us on the details of the attack. Our targets were some 300 kilometres distant. Strict radio silence was ordered. A reconnaissance machine maintained visual contact at all times with the targets and relayed their position to us. Visibility was excellent as we climbed to an altitude of 7,000 metres. From far off we could see the enormous wakes the ships were trailing, indicating that they were steaming at full speed ahead. We were met by heavy anti-aircraft fire but at that height there was no risk of us being hit and we looked on as their shells exploded beneath us..I sought out the biggest vessel and throttled back to 180 km/h. The air was calm and still, our trusty Do 217 perfectly stable. My observer Uffz. Degan launched the Fritz X with his right hand, switched the automatic camera on and guided the bomb into the target. It took just 42 seconds from launch to impact directly amidships...it wasn’t until later that evening that we knew that we had hit the Roma and that she had sunk..”

Deumling and his crew had also arrived over the target area after one hour’s flying time and were at the optimum altitude for launching the Fritz X, some 7,000 metres. With no interference from enemy fighters and cloudless skies launch conditions were ideal – the Italian battle group below must have presented an imposing picture;

Deumling; "..We weren't thinking of the sailors on board those ships. From 7,000 metres they looked like toy boats in the bath. We couldn't make out any details of the individual ships. Having practised launching our 'Fritz X' relentlessly we were under a certain pressure to get this right and it was with some anxiety that we were able to position ourselves right over the fleet out of the range of the anti-aircraft shells exploding below us... "

The fact that the Fritz X were launched with the aircraft more or less straight and level had probably created confusion among the Italians, lulling them into believing that German intentions were not offensive. This mistake was fatal, considering that the Italians were under orders to fight back only if attacked. At 15.45 the Roma was hit on the starboard side. The bomb burst into the sea after having passed through the Roma's 33 metre wide hull and the ship’s speed was reduced to just 10 knots. At 15.50 the Roma was struck again by a second bomb fatally wounding the huge battleship. A column of flames and smoke spiralled upwards one thousand metres high. Turret n. 2 (1.500 tons) along with all of its occupants and the command tower were projected aloft and tilted to the right side. It was the end for Bergamini and his staff. The ship began to tilt to starboard. It was a horrendous show of death and destruction. The majority of the men were burned alive. At 16.12 the Roma turned upside-down, broke into two parts, and sank. With her, no less than two Admirals, 86 Officers and 1264 sailors were lost.

Deumling ; " as we made our way home we realised that we had achieved a good hit and had come away without a scratch. At the time we had no thoughts for the victims - that is why sixty years later I find the pictures taken that day so disturbing..that myself and my crew had not launched the second and fatal bomb to hit the ship was of little consolation...." ( jacket cover photo of Deumling's book below depicts the Roma after the first Fritz X hit..) 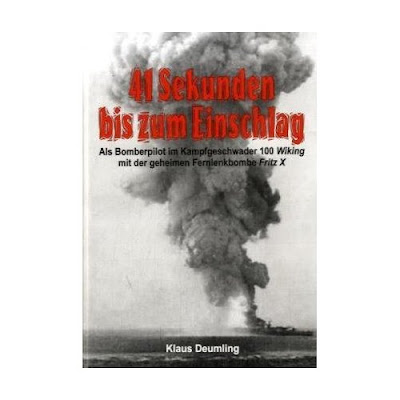 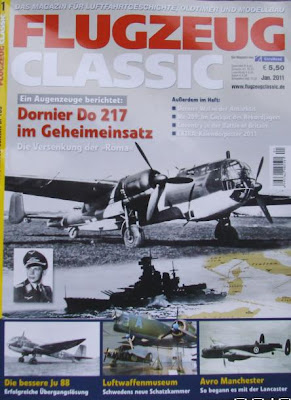