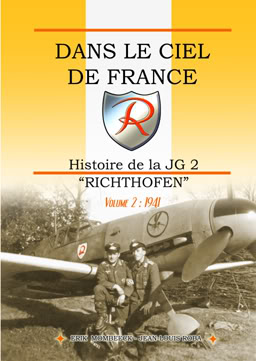 ..II. and III./JG 2 started conversion onto the latest 'F' variant of the celebrated Messerschmitt fighter during March 1941. The 'Friedrich' presented a number of enhancements over the successive improvements introduced to the venerable "Emil" with which the Jagdwaffe had gone to war over Poland. The basic airframe had undergone a redesign with the aim of improving aerodynamic efficiency - especially in the area of the wing and tailplane. Both spinner and wingtips were rounded and more streamlined and the Emil's horizontal stabilizer brace supports had been eliminated. In addition the tailwheel was now fully retractable. However the Friedrich did not feature wing armament and weight of fire was thus reduced in comparison to the older sub-type. There were also some structural issues with early examples, a number of pilots being lost after tearing the wings off in high 'G' manoeuvres. The most notable loss was JG 2 Kommodore Wilhelm Balthasar on 3 July 1941. Despite this, the first Bf 109 F-2s in service on the Channel Front gave the RAF a pretty hard time. On 23 July 1941, two Circuses were mounted for actual losses of 15 Spitfires and a single Hurricane shot down - the "Richthofen" claimed no less than fourteen Spitfires during Circus No. 59 (from 13:14 to 13:30) and fourteen more (plus a Hurricane ) during Circus N ° 60 (from 20:55 to 20:20)! JG 26 filed nine claims. 20 September 1941 was another bad day for the RAF with three Circuses over France - JG 2 claimed 15 Spitfires (7 actual losses) while their training Staffel 4./JFS 5 claimed 11..! On 27 September, two groups of eleven Blenheims were sent to Amiens and Mazingarbe (Circus 103). The RAF lost twelve Spitfires ( from Nos. 72, 129, 308, 403, 603, 609, 611, 615 and 616 Squadrons). With the F-2 in service the RAF over France sustained an almost constant round of blood-letting..
Posted by FalkeEins at 04:08