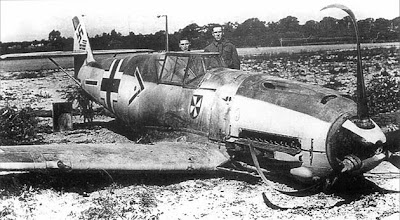 Best known as 'The one who got away' Franz von Werra had made a number of attempts to 'escape' while held in the UK. He was subsequently transferred to a prison camp in Canada. However he didn't exactly 'escape' from detention there - in fact he was able to alight from the train taking him to a POW camp. This was in April 1941. According to his own account he then paddled a small boat across the St. Lawrence with his bare hands. He was the third German serviceman to have crossed to the neutral US by this stage of the war but the 'von' in his name ensured the US press would fill column inches with the 'Baron's' 'story'. While the US authorities did plan on sending him back to Canada, the German embassy in NYC hurriedly organised his onward travel to Mexico and south America....incidentally 'von' Werra wasn't a German or even a 'von' at all. He was born to impoverished Swiss parents, the 'de Werras' and 'sold' to his adoptive German parents, cf. Wilfried Meichtry. His motives for 'escaping' were rather less than 'heroic' - according to Burt Leasor's book & the film based on it, the British had apparently told fellow inmates about his considerable tally of false claims - specifically five Hurricanes shot up on the ground on 28 August 1940 during a sortie where he claimed four aerial victories - all these claims were apparently accepted by his superiors, specifically Oblt. Sannemann and Hptm. von Selle, without witness statements - and needless to say were false. His 'determination' to escape was at least partially motivated by the possibility of his fellow German POWs taking a very dim view of his 'fraud'- he was an RK winner after all. Author Robert Michulec in Greenhill's 'Luftwaffe Aces' says he was the 'greatest liar of the Jagdwaffe aces'..
Posted by FalkeEins at 05:00