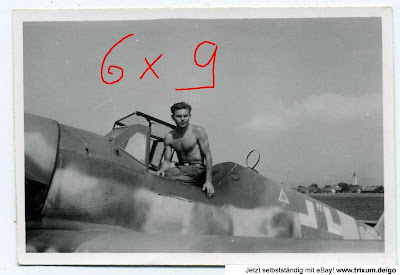 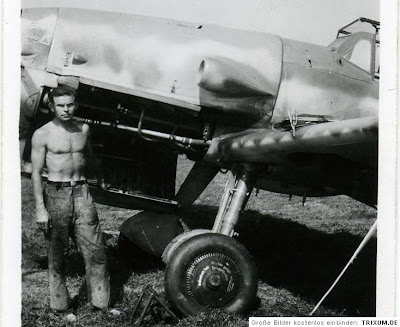 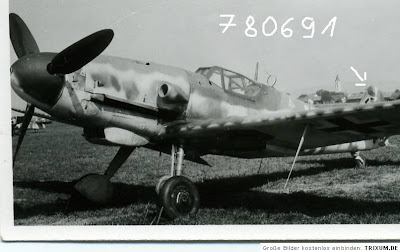 Fantastic series of images depicting Bf109G-14/AS WNr.780691 ... note the "chin bulged" lower cowl panel in photo 3, which was apaprently not due to any technical necessity - the area covered by the "chin bulge" (outlined by the thin black line) shows no tubes protruding outside of the lower cowl profile

Peter Schmoll writes in "Die Messerschmitt-Werke im 2.Weltkrieg" that 780672 to 780697 were Bf109G-14/AS, produced in Regensburg from July 1944 onwards. Total number 1373, the last Bf109G-14/AS produced at Cham-Michelsdorf in March 1945. Regensburg production would have been at Waldwerk Hagelstadt "Gauting".

The last digits of the Werknummer "0691" are repeated on the rear fuselage segment - maybe crudely over-painted with the same colour as the fuselage band. The tail unit is not of the "dark type" with stencilled blotches.
Posted by FalkeEins at 11:52